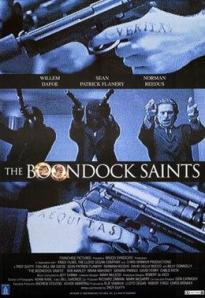 So it is March! It is the time that we whip out all of our green apparel and use a holiday as an excuse to pretend to be Irish and get shit faced out of our minds!

So I am sitting back in my chair thinking… “Hmmm…. You know I should review something that is in the spirit of Saint Patrick’s Day… But what? Meh I’m lazy, let’s review Boondock Saints.” And since I just reviewed The Walking Dead I might as well hit the entire Norman Reedus oeuvr.

So in short, Troy Duffy’s ode to vigilante justice is about two fraternal twins Connor and Murphy MacManus (Flanery and Reedus) who are two devout Irish Catholics that live in a city that is infested with organized crime. After receiving a ‘message from God’ (insert Blues Brothers reference here) the two turn to the role of ‘God’s Sword’ and dish out vigilante justice to clean up the streets. They gain the help of their friend Rocco (David Della Rocco) to track down and kill crime bosses and their assassins. However all is not well with their new calling as FBI Special Agent and certifiably crazed mad man Paul Smecker (Willem Dafoe) is hot on their trails attempting to catch the newly dubbed ‘Saints’. They are also being hunted by the infamous mob hitman Il Duce (translated ‘the Duke’)(Billy Connolly) who is attempting to put an end to the vigilante’s murder spree.

Originally a flop during its release in 1999, Boondock Saints has become the epitome of what it means to be a ‘cult classic’. While it is despised by critics, giving the film a 17% certified ‘rotten’ rating on Rotten Tomatoes with various critics dubbing the film as ‘juvenile, ugly, and all plot no substance’ the film has none the less picked up adamant fans, receiving a 93% certified ‘fresh’ from users.

So needless to say even though it was a flop in theaters and hated by critics almost universally, the film is still a beloved classic that is being quoted to this day. Plus thanks to the… just wonderful performance of Willem Dafoe the film has obtained internet meme status on almost every frontier.

Coming from my own personal experience, I know several people who have the tattoos ‘veritas’ and ‘requitas’ on their hands (tattoos worn by Reedus and Flanery’s characters). And I honestly do not know a person who cannot repeat the prayer that the two characters say before executing a person (myself included).

So what is it about this film that makes people love it so much? What is it that gives it that special formula to make it one of the most beloved films of its generation even though it is detested by critics? Well I intend to find out! We are going to take a look at Boondock Saints from all angles and discover what is it that makes it so damn cool.

Their are three things that I can list as reasons why this movie is as popular as it is nearly 15 years after its release and those are ‘chemistry’, ‘quotability’, and ‘memorability’.

First off if you do not have good chemistry between the lead characters then your movie is destined to be a failure. In the case of the Boondock Saints and its premise if you do not have likable leads that can work off each other then you not only have a failed movie but what would go down as one of the worst movies ever made and be found in the $5 bin at Wal-Mart at a ‘reduced rate’ of next to nothing. 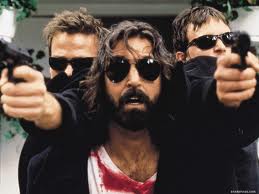 The chemistry between Flanery, Reedus, Smecker, and Rocco is fantastic. The acting between the two brothers was astonishing and convinced me that these two were ‘fraternal twins’. Everything about them exudes brotherhood that is very tricky to pull off when you are not in fact related. If these two did not convince they whole audience that they were not the most important people in each others lives, this film would have been a colossal failure. But thanks to the chemistry between Flanery and Reedus it actually makes it so redeeming in many peoples eyes.

(Minor Spoiler in next paragraph)
Then there is the relationships between the Brothers and Smecker and the brothers and their friend Rocco. Both Della Rocco and Dafoe made me as a viewer believe that they wanted to help the brothers succeed in their goal. Rocco comes off as a genuine friend and not just some guy who strolled onto the set and Smecker is genuine with his relationship between him and MacManus brothers.

I know this is a cop out for any big budget movie that fans love yet critics hate but dammit  this movie is just so magnificently quotable. If there is anything that created the meme status that this movie has it is the fact that it is quotable.

With memorable lines like ‘IT WAS A FIREFIGHT!” During one of Willem Dafoe’s many… MANY wonderful dialogue/summaries, The prayer given by the Saints before executing another mobster (which is just amazing), one liners delivered by Reedfus and Flanery such as “I’ll get the bloody rope”, and the amount of times they say ‘fuck’ that comes dangerously close to competing with films like South Park: Bigger, Longer, and Uncut and the faux documentary The F Word on cursing count.

But what really makes a movie memorable is when you can quote it, lovingly repeat it several years down the line, and seeing who all around your social circle has seen the movie and who to shun as social pariahs forever for not seeing your beloved film.

This one almost goes hand in hand with quotability but let me explain what I mean by memorability. This movie has an identity to it that is all its own. It is unique and sets itself apart from other films in the genre or many films in the genre. I mean when we look at it, the 2011 Academy Award winning film The Artist is hands down superior  to this film in EVERY SINGLE WAY POSSIBLE! Acting, cinematography, hair and make up, hell I’m sure even the catering would beat the shit out of Boondock Saints ass. But at the end of the day when people bring up the the Artist maybe five people out of the fifty in the room will vaguely remember its existence. But when you mention Boondock Saints damn near everyone will have seen it and have an opinion about it whether for better or worse.

This film has an identity that other films just do not have. It makes it memorable and beloved or despised by anyone who watches it.

Any movie has its share of bad points and Boondock Saints is no exception… Hell far from it. Their is plenty wrong with this movie on a technical level that cannot be overlooked. I like many others do not believe in the concept of a ‘popcorn movie’. Movies should have to answer for the areas that they got wrong so they can learn from it and grow. (ref. Boondock Saints 2: All Saints Day but we will get there soon). So I feel it is my duty to discuss what is wrong with the film.

The cinematography is meh. It does portray the world they are fighting against but several scenes other then the execution scenes feel clunky and poorly editted.

The film isn’t much more than what it is. It is a straight up vigilante justice movie with no twists, turns, or different takes on the genre. The MacManus Brothers receive a ‘mission from God’ and they carry it out. They never once question their command, which makes them more loyal than Moses in a way. But then again Moses was given a daunting task of freeing the Israelites from slavery while Murphy and Connor were told to kill mobsters indiscriminately with flashy weapons.  I guess you can choose which job sounds easier to follow.

The MacManus Brothers do not change, nor learn from their experience. They blindly accept a fate given to them and just execute it because that is what they are suppose to do. Granted they do grow in the ‘vigilante’ since going from bumbling would be assassins to trained killers. But I do not feel like this is good enough character development.  In their own movie it feels like they are just their to kill and deliver one liners.  The only character that is shown ‘growing’ from the experience is Smecker during the third act of the film.

The mobsters are all one note as well. With the exception of little details provided in exposition dumps, the mobsters are just nameless faces being offed by the MacManus brothers.

Bottom line on a technical level it simply isn’t a ‘well put together’ smooth running film, with growing characters, and a strong narrative. It is straight up one liner, kill baddies for the films entire run time… But in a way… That is really part of the appeal.

Yes… Technically on a cinematic level this film is ‘bad’. As I stated earlier it is a no surprises vigilante justice film with mediocre cinematography… But I’d be lying out of my ass if I said that I didn’t enjoy the living shit out of it!

This film is just so much damn fun to watch. Sometimes whenever you are angry or depressed you need that straight up kill the bad guys  film to help you lift your spirits. I will admit that sometimes it is ‘therapeutic’ to watch the good guys simply… win.

Reedus, Flanery, and Dafoe are just so enjoyable to watch and quote, it simply never gets old no matter how many times I watch it.

That completes another installment of Tanner Reviews the World. Coming up next week we will be looking at the same film but with a different title and not as quotable… Boondock Saints 2: All Saints Day.