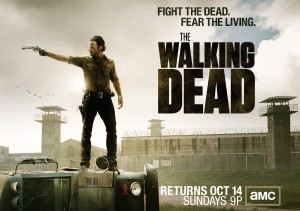 So it has been a few days after the season finale of AMC’s The Walking Dead Season 3 and after the dust has cleared and I have had a chance to review the other episodes and now I am able to wrap up the show as it stands now.

I will state that this is merely a follow up to my Walking Dead review so if you want the full review then please check that out in my archives.

Overall the season really is polarizing. There are some episodes that were very well done and well written… But then there were some that were simply appalling and VERY poorly written. You kind of have to take the good with the bad. This season saw the most ‘growing pains’ from the series as they are now trying to separate themselves from its comic book counter part and branch into their own separate entity with the comics being merely a ‘guideline’.

The season finale itself I felt to be VERY lack luster. It didn’t resolve a lot, their was a body count but most were really irrelevant with the exception of the big twist. Plus their are moments where it completely rapes the realm of plausibility.

Minor spoilers  (mainly for comic book fans) they are still in the prison. Which… I can kind of understand because after the prison comes the trip to and the plot in Alexandria which for all intents and purposes is still being resolved and with the characters who are now dead there isn’t a whole lot that happens in between the trip to the prison and trip to Alexandria so I can see why they would want to expand the prison.

I do think that they need to take a step back and evaluate the number of episodes per season they are running. With it increasing from 6 to 12 to 18 if they keep going there is going to be A LOT of padding merely to make money and in the end people will get bored of the series as a whole.

Overall the season is okay, not great but okay. Kind of what the critical reception of the show at large is so it is at least meeting the status quo. Overall season 3 is a VERY polarizing season with a lot of episodes that fail miserably but some that are VERY well done. Unlike season 2 they did take a few more risks. They were safe risks granted but they did dip their toes into the pool of what they could and could not get away with the fans of the show.

Overall the scores for the shows seasons is as followed

Well that does it. With the show going into hibernation, no games coming out in the near future, and me not feeling the need to review individual comics as they come out, I can let the series be for a little while.