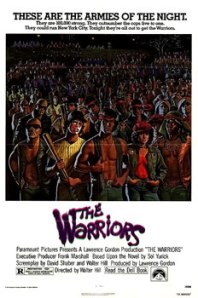 It is always fun to review a controversial movie… Granted it was controversial back during its release in 1979 and since then has been dubbed a cult classic and some would declare one of the best movies made in the 1970’s and of all time, but controversial none the less.

Created in 1979 under the direction of Walter Hill, produced Lawrence Gordon, and based on a book by Sol Yurick, The Warriors is the story about a group of nine young men who belong to a New York Street gang known also as the Warriors based out of Coney Island. After being framed for a murder they did not commit and with a large bounty placed on their heads, the Warriors have to fight their way back to Coney Island with every gang in the city looking to cash in the bounty as well as the NYPD looking to round up every gang member in New York. Loosely based on Battle of Cunaxa where 500 Greek Soldiers were stranded in Persian territory and had to fight their way to the sea.

The film was critically panned upon its release calling it exploitation and superficial. This was not helped by the fact that the movie spawned small crime sprees from teenagers and young adults who seen the movie and wished to emulate the characters in it. Because of this the film now frequently finds itself on any list of the Most Controversial Films ever made.

But the film has aged gracefully as time as passed and some critics have looked at the film with new light and the original panning has been reduced to mixed reviews for the film, with a strong following of people who praise the movie and people who hate it.

So needless to say this film is very polarizing and understandable why it holds such an infamous title. But how did the film stand the test of time? Let’s take a look  at this more ‘colorful’ version of New York Street Gangs and see if the film still holds up.

One thing this film does a fantastic job of is portraying the world that these characters live in. The person who did the casting for The Warriors did a phenomenal job because with the exception of the leaders of each of the portrayed gangs, most of the characters look like they are barely out of their teens, some of which look even younger than that. It does a great job portraying just what gangs in New York and other major cities were comprised of. For the most part very few of them were aged, mature people. They were kids, usually from lower income families. Most of them didn’t have the amenities of good educations and found themselves on the streets. The fact that the majority of the cast doesn’t look older than eighteen really adds to the hell these characters live in outside of the movie.

One of my favorite scenes of the film comes near the third act when the remaining Warriors who have not been killed or arrested find themselves beaten, bruised, and exhausted riding back to Coney Island. Then two young couples dressed in what looks to be prom tuxes and dresses comes in having the time of their lives. During this entire film we have watched these characters go through absolute hell. They have been chased and beaten by just about every cop and gang member in New York. The woman who joins them, Mercy’s feet have turned purple from the loss of circulation in her toes from her shoes. These people have been through the worst parts of their lives and then two couples walk in who have obviously had a fantastic night. While these people have been going through hell, it means absolutely nothing in the grand scheme of things. This one scene establishes just how worthless their whole efforts had been. Which makes the next scene when Mercy (Deborah Van Valkenburgh) and Swan (Michael Beck) step off the train and see the slum that they returned to. It is a wonderful scene that shows that even though they have been through this epic journey, it really meant nothing especially when Swan comments: “So… this is what we came back to?”

While the film has been labeled as a movie that promotes gang activity with the youth, I actually think with that scene alone establishes just why kids should not join gangs. Even on your most harrowing epic of nights… It really will amount to nothing but returning home and going to bed bruised, beaten, and with no future.

Acting is Fantastic and Main Characters are Not One Note

A lot of the characters in this film do lend themselves to being stereotyped by certain quirks and characteristics. Characters like Ajax (James Remar) is the tough one and wears cut off gloves and acts like a badass every chance he gets while other characters like Rembrandt (Marcelino Sanchez) is the youngest and newest members whose name says it all. He is more of the artist of the group. In less able bodied hands these characters would be these one note stereotypes… But thanks to some fantastic acting from the entire cast they are able to turn these stereotypes into well rounded characters that you truly want to see succeed and the main villain Luther (David Patrick Kelly) does a fantastic job creating this evil demented shit stain that you want to see gets his comeuppance.

The extras are hit and miss, some of them are so bad that they are noticeable even as background characters. But from the mains each of them did a fantastic job.

It is a Great Homage to the Source Material

This credit not only goes to Smith and Gordon but also to Sol Yurick as well. The Warriors is a fantastic modern retelling of the Battle of Cunaxa. For those who do not know of the source material it is hard to understand. But for those who enjoy Ancient Greek History it is a great way to put this battle into a modern context.

Some Scenes are Very Dark (Literally)

Luckily this problem was somewhat fixed if you own the remastered versions released on DVD and Blu Ray but from its original VHS tapes their are many scenes that are VERY dim to the point of being almost being a black screen. Even in the DVD and Blu Ray editions the film is still very dark and hard to see. Every time you put it in you will have to increase the brightness on your television screen just to see some of the earlier scenes.

Besides the tremendous choreographed fight scenes, the one thing that I think really contributed to the crime spree of teenagers and young adults wanting to be just like The Warriors is the fact that most of the costume designs  while cool and fun to look at, does not give a realistic image of what gangs were like. Each of the gangs shown wear some bright and colorful outfits. The Warriors wear cool looking leather vests with angel wings and skulls on the back. One of the most famous characters in the film, a gang calls the Baseball Furies dress in baseball uniforms and wear bright face paint. Other characters wear cool bright outfits, the Gramacy Riffs dress up as martial arts warriors, and even a set of fucking mimes show up. Seriously, the first scene looks more like a circus got mixed with a punk rock show and the martial arts characters from the set down the road then battle hardened gang members.

While the film itself and the scene I mentioned earlier warn people against these tendencies, the costumes and fight scenes are sending messages that you look absolutely cool being in a street gang. Really I think this aspect of the film is what really lead the film to be as controversial as it is.

I’ll be honest… If you removed the fact that this film is controversial for having a small crime spree attached to it… There is actually nothing wrong with this film. As a matter of fact I would call it a phenomenal film that was expertly cast and shot with a director and writer who took an obscure piece of ancient Greek History and turned it into an epic tale set in the 20th century. Sure the film does have a bit of a black mark on it, but since then people have seen the film for the genius that it truly is and I for one think that is a fantastic thing.

Well this is day 2 in my experiment of getting on a regular reviewing schedule. So far so good and I am really liking how things are going. I have some big plans in the future and this time with the right plans and with the money to back it, I am feeling really good about the future. My next review should be out Thursday.

Until next time, thank you for reading.

One thought on “Tanner Reviews The Warriors”