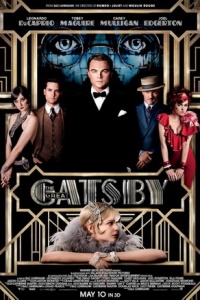 Well hello Ole Spor’! I just popped down to my local theater to see one of our greatest US tales told through the eyes of director Baz Luhrmann… And wow wasn’t this a beautifully polished turd.

I suppose it is what I was expecting from Luhrmann. Make no mistake, I am not a fan of his films. He is a decent theater director and definitely had a theater eye for cinema. Everything seems pretty, everything seems polished, and stylized. But my God there is just not enough there besides the visuals to go on. His best film by far was Romeo + Juliet and that is mainly because Shakespeare’s writing was there for substance, not his.

Now before I go further please don’t get me wrong, stage plays need substance upon visuals. But in stage plays you can get away with a little bit more. You tell stories through visuals and movement so you don’t need as much support from the overall dialogue of the characters and actual scenes.

Cinematography and Sets are Stunning

One thing this film has going for it is that it is beautiful to look at. My word, Luhrmann knows how to make a scene look gorgeous. Each set, each design is bright and vibrant, fascinating and just damn cool to look at. Loud busy scenes with the grand make up and costumes are wonderful. The dirty parts of New York, the coal mines and unpleasant areas look wonderful as well. Hell even the CGI looks pretty damn impressive.

I can pick on Luhrmann’s films until the day comes up but one thing I can never take away from the guy is his ability to make whatever he puts onto a camera look breath-taking and fascinating.

It is a Great Throwback to the Times

Another area that I will give them credit for is the film’s cinematography really did bring me into the early 1900s with its imagery and through the background characters. I do love it when a film could make me feel like I am in the given time period in a way that is not cliched or forced. The setting feels natural and the actors do feel natural in it.

I also loved the scenes where they were in the speakeasys. The scenes did feel a little blown out of proportions but I loved to watch the way the whole setting just came to life and people of the highest order and the common folk met to share a drink.

The one thing that drove me nuts was anytime a rap song popped up in the film. Now I’m not the biggest fan of rap but I don’t mind the genre nor do I mind it in a film whenever it fits with the narrative. But this film would have done so much better if they would have stuck with either music that fit the moment in time or left the soundtrack as a subtle background… As they do in many different scenes. When the rap music plays loud and brash. It makes me feel very disjointed and makes the scenes with said music very confusing.

But then again there are many scenes where the music complements the scene very well. The song playing softly in the background while Gatsby and Daisy are having a rendezvous in the garden really adds a very touching and intelligent aspect to the scene. The best way I could describe it is the seasoning on a well cooked steak. The steak is still delicious but it is that extra flavor that really adds to the scene itself. Very smart… While the rap songs is more like dumping a bowl of Jolly Ranchers into a pot of chili… You are just sitting there saying these two things do not belong together and who in their right mind would think this was a good idea?

All Style and No Substance

I mentioned this before in the opening but I feel it does need to be restated. I even mentioned in the pros section that this film does look very pretty and very well shot… The only problem is dialogue and actual character development fail.

Most of the actors are good actors but they just have very little to work with. The camera seems to focus so much on style and precision of movement of the background that you lose focus of the wooden acting that is being put forward. In all truth from just about every character in this film they feel more like parodies of the characters they are attempting to portray.

I never once got lost in the characters of Nick or Gatsby or Daisy. Instead I see Tobey Maguire, Leonardo DiCaprio, or Carey Mulligan attempting to play the parts. The film seems to focus so much on set that they forget to fully flesh out and develop the characters.

The Real Chemistry Comes from Tobey Maguire and Leonardo DiCaprio

I do not know if this is how everyone else felt but through the entire film.. I was waiting for the moment when Gatsby and Nick hooked up. DiCaprio and Mulligan have decent chemistry at least enough to carry a film. Both are talented actors and do a good job driving the romance forward… But my God DiCaprio and Maguire have way more sexual chemistry than him and Mulligan.

It is almost reaching the artsy version of Top Gun with how close these two seem to want to bone each other. With how much Gatsby just seems so fascinated with Nick coupled with the fact that he is always watching him, invites him everywhere, even to what was supposed to be a very private event between him and Daisy where he takes Daisy on a tour of his mansion. It feels more like Gatsby is hiding his true feelings rather than finally finding Daisy. Nick even seems confused by this when he invites him. I personally have not read the book and if it was in there I’m sure they were just doing as the book said… But it just felt weird.

The chemistry between Maguire and DiCaprio certainly adds a level of enjoyment to it… But for all the wrong reasons.

Legit question… Why is this movie in 3D? I did not see the 3D version but I could see where the 3D aspect was really supposed to play a part and… It just doesn’t seem necessary. I’ll argue this is more at fault of the production than director… It just feels like an unnecessary gimmick for a movie such as this and I feel that the film would have stood well on its own if it was left to traditional format.

This is one beautiful polished turd. The film is gorgeous to look at, the settings are marvelous, and even the CGI blends well with the live action scenes. So if there is one thing that this film has going for it, if you put it on pause you can at least enjoy the imagery.

However the acting is surprisingly wooden from really good characters and actors, chemistry is ass backwards, and music when bad is REALLY bad.

If you are a fan of the story you might get some enjoyment out of it. But really this is one I recommend you either skip or rent whenever it comes out on DVD/Blu Ray

Thank you for reading. Like always if you enjoyed this review please like and subscribe for more and by all means hit me up in the feedback section on my Contact Me page. I would love to hear your opinion.

Thank you for reading and be sure to come back tomorrow for my review of Far Cry 3.

One thought on “Tanner Reviews The Great Gatsby”