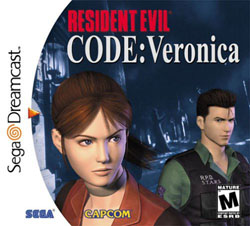 And we are back to the main story after deviating from the path with Survivor we return to one of our favorite characters from RE 2 Claire Redfield and her hunt to find her brother Chris. After this one folks be prepared because we will not be touching the main story for a LONG TIME. Resident Evil: Code Veronica is probably the most bizarre game in the main story line, one of the more forgotten, the only game in the main series to not be numbered, and one of the more underrated games of its time. I mean don’t get me wrong this thing was praised up and down upon its release but nowadays when you get any number of RE fans into a room to talk about there favorite games this one never gets pulled up and it really is a shame that it doesn’t because this game is a shit load of fun.

Set on Rockfort Island, you take control of Claire for the majority of the game while you are still searching in vain for your brother Chris. Since RE2 Claire has become uber badass and even breaks into an Umbrella facility in Paris complete with BADASS scene of her running away from a helicopter. (Which was ripped of in Apocalypse FUCK ALICE!!!!) She has recently been captured but after another virus outbreak Claire is released from her cell and now free to explore the dead island. She finds a young friend named Steve Burnsides and a nefarious eccentric twin villains in Alfred and Alexia Ashford. This film also saw the return of one of my favorite villains of all time ALBERT WESKER!

Wow I loved this cast of characters. The only complaint I had came from Steve Burnsides but we will get to him later. I love the fact that these cast of characters has been kind of… tuned down from other games. In all three of the RE games there is a large cast of characters and while you do get attached to some of the characters a lot of them seem to fall by the wayside, especially if you are a casual gamer and do not look for more back story on the supporting cast and bit roles.

In this game the characters include Claire and Steve, Alfred and Alexia Ashford, Chris Redfield, Albert Wesker, and Rodrigo Juan Raval. With the exception of Raval who does actually play a huge part in the game, the whole cast is intricate to the plot and the story. I just love the fact that we got more of a chance to get to know these seven characters then me having to dig through wiki pages and fan sites just to read more about the STARS from the first game which consisted of thirteen people whom I only really got to know half. It is a fun story. You want the good guys to win and the bad guys to fail and it is thanks to the evil tendencies of Wesker, the sheer creepy factor of the Ashford twins and Claire and Chris’s determination to reunite.

The characters is truly a vital part of this game and adds to the narrative at large.

Return of Wesker and Wesker’s Report

Nobody was more excited than I when I heard that Albert Wesker, the evil traitor from the first game was making a come back. I loved the Wesker character and even back in 1998 did not want him to be a villain. He really is that villain that you just love to hate. He is so evil and seems to revel in the idea of being evil. He is smart, he isn’t some random baddie Bond style villain. He sits in the shadows he bides his time, he waits for the right moment to strike. So when I heard he was making a return I was really excited.

But that did not stop me from worrying and wondering how they were going to bring him back. In the first game it looked pretty definitive that he was dead and anyone can retcon a player back into life. Hell comics do it all the damn time. But really I was hoping they gave a legit reason as to why Wesker had made his return… Then I saw Wesker’s Report. My God this was genius. Wesker’s report is a 30 minute video that is sent in addition to buying Code Veronica. It is narrarated by Wesker himself and gives a brief overview of the past three games from Wesker’s perspective, how he survived, what were the methods they used to bring him back, and how he himself effected the events of the previous game being the shadow player even hiding from the prying eyes of the game players.

It was such an intelligent idea and a great add on to the game. I wish other games did this. Now DLC’s are all the rage but man after I lost my old copy of Wesker’s Report I bought a brand new copy and I do watch it from time to time whenever I’m bored and have thirty minutes to kill. Wesker’s Report really is the icing on top of a great game. It adds to the mythos and gives characters the feel of being ‘in on the joke’ at least in terms of story line and a prelude to the game they are about to play.

I know I am in a small precentage here seeing as how I have seen fan pages calling for this guys return but good lord I was never a fan of Steve Burnsides. I always saw him to be just some whiney little brat who had a rough life. I can sympathize with him at some points but for most of the time I just got the feeling that he was an adolescant dog who just wanted to hump Claire’s leg.

I suppose the real reason people keep getting baited into wanting him to return is due to the fact that Alexia said that he might have purpose for him in the future and that he really doesn’t need to die. Okay that I get but after seeing where the games went I do have not feel like that is going to happen and the producers of the game will just let Steve Burnsides drift away with time and in my opinion it is a good thing to not have to listen to his annoying voice.

You Will Feel Uncomfortable

This game will make your skin crawl with the relationship between Alfred and his twin sister Alexia. Minor spoilers but damnit the game has been out for years so what is anyone complaining about? It turns out that Alexia is in a statis tube on some Antarctic base leaving Alfred all alone who has developed a split personality during his sister’s absence. So he takes on her mannerisms and dresses as her and even talks to her as a person with split personalities might be inclined to do.

This is straight out of Norman Bates Psycho levels of fucked up and if you put any real thought into it you will be crying huddled in the shower. It is not only proven that Alfred is a cross dresser but it is also has several undertones of a ‘sexual’ chemistry between the two. So now we have a level of incest between the two or at least from Alfred’s perspective but if you consider the fact that Alfred does have some autonomy over his version of her psyche it could be implied that Alfred and Alfred’s version of Alexia may have acted on those urges. Man o man does anyone else here feel uncomfortable? In a world of zombies and nightmares beyond your wildest dreams it is Alfred Ashford that makes the skin crawl.

Code Veronica really is the one of if not the most underrated game in the series. The characters are well fleshed out and for thst most part likable, the plot is great and in some parts truly terrifying. You do want to learn more about the villains and are genuinely excited to see old foes return for more.  It has some really good horror elements to it and is a very good edition to the series.

I warn you everyone after this one things are going to get a little bumpy from here. It is a long way tell 4 so its time to buckle down and get moving.

If you would like to leave some feedback I would love to hear it. Just got to the Contact Me page for more.