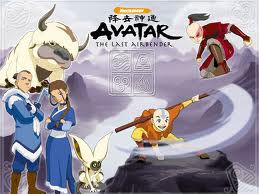 SSSSHHHHH…. It is okay. Do not think about M. Night Shyamalan. You are in a safe place, a better place. A place where we can discuss one of the best animated series to come out of the Nickelodeon line up, Avatar: The Last Airbender. Yes this fantastic series has received quite a stain on it as of late thanks to Mr. Shyamalan’s admirable yet abysmal attempt to create a child friendly film with his children in mind. Since then fans of the series have been beside themselves wondering what to do with it. Some have adamantly denied its existence while others have felt compelled to scale the rooftops pronouncing ‘The Show is SO MUCH BETTER!’

Let me be one of the many to say, that to judge Avatar: The Last Airbender by the live action film by Shyamalan would be a huge mistake and denying yourself a both fun and enjoyable show. Avatar: The Last Airbender was truly a risk taker for Nikelodean at the time of its release who had mainly stayed away from any animated show that had Japanese/ Eastern influence to it. Now don’t get me wrong I am sure someone will be able to say that one of the cartoons was inspired by a film or TV show from that region. But for the most part anything that had a slight ‘anime’ style and feel to it remained up until that point securely on Cartoon Network and the beloved Toonami. It wasn’t until 2005 the company finally took the risk and released the show.

Unlike other shows on Nikelodeon’s line up that were episodic, Avatar: TLA actually had a concise and consistent plot complete with three seasons and a set beginning, a middle, and an end. This show was actually a huge step out of the comfort zone for this company and in many ways it paid off in full not only grabbing children’s attention but bringing in a more young adult anime friendly crowd to at least tune in and watch the show.

They have since created a ‘sequel’ or a continuation of the story but it is actually set several years in the future with most of the characters playing the wise adult roles and have since let the 61 episode series stand on its own. The show is very intelligent and what I strive to do today is to show to everyone just how this show differs from Shyamalan’s film.

Animation in this show is phenomenal. It almost fits into a sub category all its own because while it is heavily influenced by Japanese Anime style of animation you can also see a lot of down to Earth US styles as well. It blends them in a strange and wonderful hybrid that gives a new and interesting feel to the series.

If these creators decided that they wanted to make an anime style show and just went all out and attempted to use the same techniques they would have been blasted from people for doing so. But instead they chose to blend the styles in a way that not only works but fits the idea of the show an Anime inspired American Cartoon show.

All of these characters are relatable and loved. I do not think there is a single one that is disliked or hated and I now that I think about it the only arguments I have ever heard is which one is the most awesome. The main characters of Ang, Sokka, Katara, Toph, their pet flying lemur Momo, and their sky bison Appa are all beloved and I see them cosplayed all the time. Ang is the reluctant hero a young rather tiny character who wants nothing more than to be a kid but has fate thrust upon him. Katara and Sokka are both people from a Southern Water Tribe with something to prove, Katara being the only waterbender and Sokka trying to become a great warrior like his dad. Toph is a badass tomboy character who is tougher than anyone on the show and she revels in the knowledge.

Uncle Iroh and Zuko are both loved as well-being the wise and cheerful uncle and the tormented good looking bad boy who all the ladies can’t get enough of (both in the series and in real life guy has one hell of a fan base). Hell even the villains are very likable. With the exception of the Fire Lord who is by all accounts the Big Bad of this series, Zuko’s sister Azula is fifty different kinds of crazy and also has her own fan base. Hell I’ll admit I love Azula. She is a really fun character, ruthless, tactful, but with multiple layers to her personality. They all feel real and as such makes the series all the more enjoyable. With the ensemble cast of likable characters people can pick and choose their favorites and squabble over that.

Holy crap this amazed me. The story actually has a beginning, a middle, and an end! I know I touched on this earlier but it has always been that American Animation would create episodic shows to milk as many seasons and as much money out of them as possible. But surprisingly enough they went with a different approach. By creating characters with a set narrative then they were able to grow in the way the writers felt they should grow and the story would progress in a much cleaner pace then say a TV series such as Lost that began to grow muddled near the end of the series.

Granted this series could have lasted a lot longer than it did but it is best that it ended that way we can enjoy the show for what it is. A great and well told story.

The Show is a Little Too Child Friendly

We couldn’t get everything. This show is VERY child friendly. Which normally isn’t a problem… Unless you start talking about a more adult theme such as power-hungry tyrants, the end of the world (or the world as they know it), and the world’s last hope at stability. When that happens there are several moments in this story where you will groan at the amount of ‘censorship’ the show goes through.

And I’m not just talking about TBS style censorship where they change the word ‘shit’ to ‘poo’ but more or less in this world it is clear that people are dying and people are killing other people. There are a few deaths on-screen but most of them occur off camera and then they tend to rarely use the word ‘dead’ or ‘death’ and never use the word ‘kill’ which as an adult… can get really irritating. Instead they substitute the word ‘kill’ with either ‘end’ or ‘take out’. Which doesn’t sound too bad at first but once you cross the age of eight it gets really frustrating. It feels blatant and out-of-place and almost condescending to the children who are watching it. Children can handle much more than most people give them credit for and the words death and kill probably won’t be as dramatically traumatizing as you think they would be. It is an irritating little tidbit of an otherwise fantastic series.

This show is miles ahead of Shyamalan’s disastrous attempt at bringing this show to life. The animation is wonderful, the cast is magnificent, the story has a more mature setting then most shows on Nickelodeon’s line up and people of all ages can watch the shows and enjoy them.