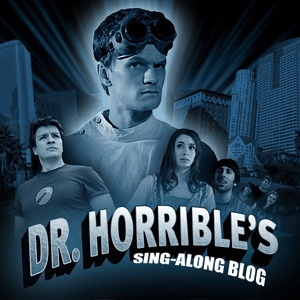 With only seven more days until my trip to Origins Game Fair… I thought it would be appropriate to review something that seems to be nerd incarnate. A 45 minute string of videos made by Joss Whedon with the assistance of his family members Zack and Jed. The film starred Nathan Fillion, Felicia Day, and fucking Neil Patrick Harris himself, this film is the  definition of awesome personified! NPH from How I Met Your Mother has become a walking talking internet meme, Nathan Fillion none other than Mal Reynolds himself from Firefly, and Felica Day from Supernatural and Buffy the Vampire Slayer not to mention Whedon whose credentials speak for themselves… Sweet Jesus the nerdery is glorious.

Created during the 2008 Writer’s Strike, this film was paid out-of-pocket by Joss  Whedon for close to $200,000 and distributed as a three episode series on the internet. It has since received DVD and iTunes releases and all the proceeds have been funding the actors who worked on this film for free. The film is an absolute marvel to watch and goes to show what a person can accomplish when they are not pandering to certain executives, producers, sponsors, and so forth. Not to mention, it stand on its own as a testament to all the amateur filmmakers out there who do not have a multi-million dollar budget to work with.

The film is about a ‘super’ villain called Dr. Horrible (Neil Patrick Harris) who is attempting to join the Evil League of Evil. A good chunk of the story centers around Dr. Horrible’s blog and his journey in his ‘nefarious’ deeds. Even though labeled a villain the character in reality is just a low self-esteem young man named Billy who is hoping to talk to his love interest Penny (Felicia Day). Though they constantly frequent the same laundry mat Billy has never worked up the courage to talk to Penny. Things go even worse when Dr. Horrible accidentally introduces Penny to his archenemy and all around hammy “hero” Captain Hammer (Nathan Fillion). The story then centers around Dr. Horrible still attempting to join the ELE and winning Penny back from Captain Hammer.

Ever since this film came out it has been dissected by everyone looking at all the motifs and individual scenes. I remember during my last quarter of college, I found a friend sitting in my favorite cafe in Athens writing a ten page paper on Dr. Horrible’s Sing-Along Blog… Ten pages… Jesus I think that is 1/4 the length of the script! Goes to show how much you can put into a 40 minute.

will love every minute that song is stuck in your head. This isn’t the type of music where you are telling your brain, “JESUS CHRIST! Shut the hell up brain. I don’t even like this song!.” This is more like “THANK THE LORD that I have the most awesome radio station in my head ever!”

Every song in this film is fun, catchy, and enjoyable. After watching it the first time, the second time I found myself murmuring the chorus and after watching it for the fourth time, myself and all the people who had seen it multiple times like me were full-blown singing and some of them did not like singing in public. It does help that the charisma of the three leads really shines through but the writing by the Whedons and Maurissa Tancharoan to create upbeat and enjoyable songs that people can… Well sing along to.

My personal favorite is ‘Brand New Day’ when Billy is finally pushed over the edge by Captain Hammer and his hamyness and decides that he will build a death ray and be the villain he was always meant to be. It is either that or when Nathan Fillion is just turning on the cheese for his character’s introduction. But really. Both are solid and show off the talents of both actors.

It is easy to see that everyone in this film is having a great time. There is just an energy to this film that you can only get if the people actually in it are just as if not more invested then the audience themselves. It does not feel like a big budget set where everything is serious business and we have a movie to shoot. This feels more like a bunch of friends got together and shot a 40 minute long video. The chemistry is just wonderful and a great part of the film.

Neil Patrick Harris and Felicia Day are wonderful. Felicia always has this friendly and kind attitude about her and it shows through her character as a genuine friendly person who wishes to help the homeless. She shows genuine interest in both Billy and Captain Hammer which makes for a great classic heroine.

NPH is as always fantastic. But really for me the winner of this film was Nathan Fillion as Captain Hammer. I saw in an interview that Joss Whedon told Fillion to “Be a cheesy as physically possible” and he turned the cheese level up to over 9000. He is a wonderful parody of a superhero. Brash, strong, and hilariously arrogant. One of my personal favorite scenes in the movie has actually become a running gag with my friends. It happens after Captain Hammer discovers Dr. Horrible’s secret identity and that he has a crush on Penny. He then brags about showing Penny the Hamcave, the Hamjet, and even show Penny the Hammer. He then steps off camera and quickly returns to utter one of the greatest lines I have ever heard… “The Hammer is my penis.”

I swear I do not think that was in the script… Hell it doesn’t even feel like it should be in the script. Neil Patrick Harris just stands there not really knowing what to say. It doesn’t even feel like something Captain Hammer would say or in the tone he would say it. I think that Nathan Fillion just channeled Malcolm Reynolds in that one line then took his leave and I always wait in anticipation for that glorious scene.

This film can be watched again and again and again and it will never get old. The first time I saw it I watched it one more time that day alone and the next time I saw it two times in a row and have shown friends this film multiple times in the same day. I cannot count how many times I have seen this film and really I do not care about count. This film is still funny and still catchy even after multiple watches. Even better the film is short. It is only 42 minutes long when all three parts are put together so even watching it twice in a row barely qualifies it as a feature link film. If you do not want to put nearly 2-3 hours of the day into watching a film then this is an easy, enjoyable, and quick watch.

This Movie Has a Little Something for Everyone

This film is nothing short of a masterpiece and one of if not the best of Whedon’s work. The characters blend together and work off each other with a level of charisma and chemistry that you only see in a hand full of movies. The film has an aura of fun to it, has tons of rewatchable value, and the soundtrack is glorious. This story is magnificent plain and simple and I have nothing bad to say about it.

Seven more days tell Origins Game Fair!!! If you are going then I hope to see you there.