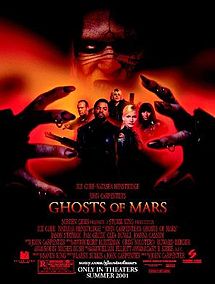 Today, let’s talk about John Carpenter. John Carpenter is easily one of my favorite directors of all time. His work with practical effects is nothing short of inspirational to me and his filmography sports some of the best movies to ever to be released from the late 70’s all the way to the early 90’s. The Halloween franchise, Escape from New York, They Live, Assault on Precinct 13, The Fog, Big Trouble in Little China, and easily one of my favorite movies of all time The Thing just to name a few. While he may not be the number one influence, his work is one of the driving forces behind what sparked my love for cinema in the first place.

… But that does not necessarily mean that I have enjoyed everything that the man has released. Sadly Mr. Carpenter has put out a fair amount of turds to off set the gold in his oeuvr over the years. Memoirs of an Invisible Man I am sad to say is on his list as well as Vampires, his most recent film The Ward, and I will even say that Christine is a terrible film that should be hated more than it actually is. So yeah, his good films definitely out way the bad, but man when Carpenter misses the mark, he misses the damn mark… By about a mile. By the time Ghosts of Mars was released in 2001, Carpenter had hit a bit of a rough patch. Escape from LA had bombed at the box office (though I still say that is one of the most underrated films of the 90’s) and Vampires in 1998 did not fair much better. By 2001, Carpenter was getting older and was beginning to reach the semi retirement stage of his career.

While this is mere speculation, I do feel like Ghosts of Mars was suppose to be Carpenter’s swan song or final bow before he closed out his career. The film, unlike his most recent works did have this feeling of his older movies, like he was trying to channel what he had in the late 70’s and into the 80’s. Carpenter, I feel was really trying to give it is all for this film… Which is a shame when it bombs as poorly as it did. Ghosts of Mars isn’t the worst SciFi film I have ever seen. In a way it has some downright inspired qualities. But the film just seems to be released way ahead of its time and has the problem of poor casting and poor writing Carpenter’s end. It just feels… Disappointing.

The Setting is Brilliant

I will say this, Carpenter did set one hell of scene. Not only does this whole thing take place on Mars… Because Mars that is why. But it is set in the future where Earth has colonized Mars and made it inhabitable and Mars itself is run under a matriarchal society. The premise itself is very clever and shows a pretty interesting role reversal of the genders… Or at least it attempts to if it wasn’t for Statham’s character throwing all kinds of sexual advances towards Ballard which I do not think would fly in that type of society.

But regardless the setting is pretty cool and an interesting twist on the story… Which would have been even better if they had focused on this instead of some random outpost on Mars.

The Film Does Feature a Young Jason Statham

In one of his earliest roles, Jason Statham is doing what he does best in this film. The action and the character that he brings really adds to the film. In fact in many instances he completely overshadows the leads on character and what it means to be an action hero.

I do wish that Carpenter would have held off on this film for a few years, because if that were the case then Statham could have been the star instead of Ice Cube and the film would have been a lot better.

You ever wonder why soon after Anaconda and Ghosts of Mars that Ice Cube decided to make comedies instead of be an action hero? Well it can be summed up by this movie. Ice Cube simply isn’t a good action hero or badass person to begin with. Even with his rap persona attached to him, the guy looks like he is a snuggable teddy bear, not helped by the fact that his emoting adds a whole new level of comedy to a film like this. One of  my favorite scenes is when Ice Cube is trying to be ‘gangsta’ and runs into combat duel wielding a pair of pistols with his hands extended out into a ‘t’ like formation. The scene is suppose to be badass, but all I could think of the whole time is this looks like something a five year old does when he is playing cowboys or something like that.

Funny thing is that Ice Cube really isn’t that terrible of an actor. He isn’t great but compared to most other singers who try to break into acting, he is one of the better talents. However his badass persona that he attempts to portray just doesn’t translate well to film and as a result just makes it hilarious.

Like most horror movies, Ghosts of Mars just has too many characters. With the exception of the lead Melanie Ballard (Natasha Henstridge), Desolation (Ice Cube), Jericho (Jason Statham), and the doctor, the rest of these characters have no real purpose except to die. It is not helped by the fact that for some of these people they do attempt to insert character arcs the same way a 2 year old tries to insert a square into the circle slot on one of those shape tables. Desolation has three buddies who help him known as Uno, Dos, and Tres all three of which die within 15 minutes of being introduced and it is said that Tres is suppose to be Desolation’s brother… Who the two share almost zero dialogue with and the fact that they are even related is only brought up in passing and it never effects Ice Cube’s character again. There are two rookie cops that join Jericho, Ballard, and their captain who dies within five minutes. They are just… There until it is there turn to die. Then there are prisoners who show up as well and they all get butchered, there is just too many! You could cut 3/4 of this cast and it would only make the film better by giving more character development to the ones that actually matter.

There is just no way around this, John Carpenter did a horrible job writing this story. There are so many instances of slap your head stupid that my forehead was numb at the end of the viewing. The story bumbles through the first two acts just acting as more of a means to an end. There is some strange subplot about Ballard taking drugs that does nothing but create waves that fade into the shot and at one point forces the disease out of her system. Already I have to ask, if that drug can expel whatever parasite that is in the air, then why doesn’t everyone just take one after they have been infected? You just discovered the cure, these things shouldn’t be that big of a problem!

In the third act when they finally make it on the train, there is absolutely no reason why they should ever go back! They could escape and you know, tell people, get back up, nuke the site. No but instead Ballard in her wisdom realizes that the script tells them to turn around, there are far too many characters still alive to end this shit now.

Then there is the ending… (Minor spoilers) Desolation and Ballard are the only two survivors and near the end Desolation fucks off after handcuffing Ballard to the train. She is later sleeping when she hears the evil aliens outside, Desolation bursts through the door and hands her a gun. They then exchange witty banter like they were the best of friends and the movie ends… What? These two have shown nothing but contempt for each other and the last time we see these two together, Ballard gets handcuffed to a train so Desolation can escape, are they really going to act like the buddy cop duo now? That doesn’t make sense.

There is just too much shit in this movie that doesn’t make sense and it can all be brought back to the poor writing on the part of Carpenter.

It really is a shame. This film did have a very Carpenter feel to it and you can see that effort was being put forth to make a really good movie… However with Ice Cube’s goofy acting, poor writing, and just poor direction the film just comes across as sad.

The setting is good though and Statham is awesome doing what he does plus none of the acting is horrendous… But it just isn’t enough to save a film like this.