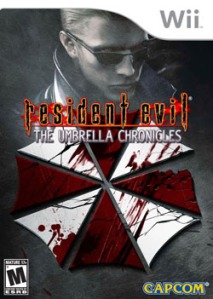 After the abyssmal disaster that was the Gun Survivor Series, I am quite amazed that CAPCOM was willing to try a second rail shooter for the Resident Evil Universe. I thought they were just going to let it be and let the poor games they did release under the RE name slip into the realms of obscurity where they belong. But no they decided to give it another shot. But this time, they took it in a different and much more well received approach. The Chronicle Series of Resident Evil is the Gun Survivor Series done correct.

Sadly this review is going to be short and filled with generalities… Because I am sad to say that I have only been able to play this game once. Keeping with RE’s deal with Nintendo, Umbrella Chronicles was a Nintendo Wii exclusive and I sadly do not own a Nintendo Wii. I was able to play the game, the same as I did with REmake by playing it at a friends house upon its release and haven’t played it since. I am well aware that the game was released for the PS3 but I have yet to find a copy so with great regret I am writing this review out of memory and a handful of playthroughs I watched on YouTube.

That being said, Umbrella Chronicles is a on rail shooter where you are taken down a predetermined path and collect weapons, ammo, and health along the way as you fight through a series of bad guys. The majority of the game is a sweeping overview of the plots of Resident Evil Zero, Resident Evil, and Resident Evil 3: Nemesis. If anything, I would call the plot ‘Spark Notes Resident Evil’. The game just pulls you through the corridor as Rebecca and Billy, then Chris and Jill, and Jill and Carlos. Only the final part of the game is actual new material, in which you actually get to see the take down of Umbrella Inc. Jill and Chris lead what is the equivilant of the pitchfork and torch wielding townsfolk mob into Umbrella’s HQ in Russia and breeze through a number of undead then defeat the newest creation in the Tyrant line known as T-ALOS. It also features Wesker doing battle with Sergei Vladimir and Wesker making off with some of Umbrella’s most important files. Finally, as the dust settles we see that Umbrella’s secrets have finally been revealed to the public and the Umbrella Exec now face justice.

It is an Effective Rail Shooter

Say what you will about the plot, the story, and some of the more lazier aspects of the game (and we will get into that later), as far as a gameplay level is concerned, Umbrella Chronicles is a very effective rail shooter. The game remains in the third person perspective, the easy-hard difficulty is based upon the amount of items that are offered to the player, the game does give some variety in style and does allow you to venture down different paths. Ultimately this game is very effective and does have a very ‘Arcade’ Feel to it. It is a simple shoot ’em up game and on that level the game is well done.

Oh baby… For those of you who are not die hard RE fans, you have no idea how good it felt to actually witness Umbrella crumble! These assholes have been our nemesis for years! We have faced their creatures, their zombie by products, their agents, and all points in between. We have been fighting and fighting AND FIGHTING all for this moment. No more Weskers, No more Nicholais, No more tyrants, no more G-Virus mutations. This time it is us versus the corporation itself.

When I took the controls and played as Chris and Jill, charging in with those people into Umbrella’s HQ guns blazing, it was the moment I had been waiting for since I was 9 years old and it didn’t disappoint. The last level is challenging, but it is worth it to finally see Umbrella brought down and know that those faceless sons of bitches finally got justice!

It is a bit of a problem whenever 3/4 of your game is just rehashing older games. Granted I do think that this is partially a way for CAPCOM to give newer fans who have just joined the series, a bit of a refresher course for the games without having to scrounge thrift shops and the internet for individual titles. But still I would have liked a lot more original content for the game, seeing as how the actual original content kept my mouth watering for more.

It is Filled With Plot Holes

Gameplay alone fills the game with plot holes. This might be the moment where I get the most fanboy, but by just breezing over those three games and bringing them down to just the two respective characters killing stuff, you really miss a lot. One thing that annoys me is in the plot where you go through the first game, you are playing as Chris and Jill… Who are never seen together in the mansion. That is because they are both playable characters and the one that is not chosen ends up locked in a cell by Wesker. To have them running together just puts in so many plot holes.

AND I know I am nitpicking this but really you could have put Barry and Jill or Chris and Rebecca together and it would have worked just fine. Would even be cool to add in another couple to play from, just to give the game a little variety. The rest, I suppose I can forgive. But this is one area where my fanboy cries foul!

One Play and You Are Done

I played this game once and I was very satisfied and all… But I really didn’t have any intention to play it again. I was upset that I didn’t get to do a refresher course for the review, but other then that, I have no desire to play Umbrella Chronicles again. Even if I have a few hours to kill, there are far better games (like Journey) that I can play to pass the time. Umbrella Chronicles left me with the feeling of, ‘Well that was fun… Now what else can I play?”

Yeah this is just a fun rail shooter. There isn’t much more to it than that, but if you are a fan of the series or want the spark notes version of Resident Evil, then give it a playthrough. You will at least be entertained.

Thank you for reading and as always, if you enjoyed this review then please like and subscribe for more material. Next on the Retrospective we have Resident Evil 5.