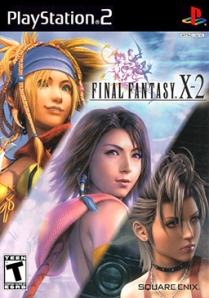 So seeing as how the two games on my list, Saints Row IV and Ni No Kuni: Wrath of the White Witch are currently tied up in prior engagements, I find myself with an open slot for this fine Saturday. That being said, I’ve decided to reach into the vault and pull out a game that I for one feel gets a little more shit than it deserves. Plus Final Fantasy XIV is coming out soon so it is sort of relevant. But granted, with scores ranging in the 80’s on sites like Metacritic and Game Ranking this could be a bit of a missed number. But what really brings the derision to Final Fantasy X-2 is the hardcore Final Fantasy fans who saw their gaming franchise take a hard right turn straight into bubbly J-Pop, Powerpuff Girls territory…. Which I can completely understand. Up until the point of Final Fantasy X-2, the community was used to very serious stories and very linear story telling of a hero being called upon to save the world. So I am not going to stand here and say that all of the anger for this game is completely unfounded… I just think that the anger clouds the judgment of what is by all accounts a relatively fun and lighthearted adventure.

Final Fantasy X-2 is a sequel to the very popular game Final Fantasy X (Naturally). After the events of FFX, life has settled down on Spira and some of the former cast of characters has settled down to regular life. Wakka and Lulu are about to have a child and Yuna and Rikku along with a new emo girl Paine have formed a crew now known as the Gullwings. The Gullwings basically travel around the world hunting down spheres or artifacts of Spira’s past and Yuna’s personal mission to find the whereabouts of Tidus. As the game progresses it is learned that Tidus and Yuna in previous lives used to be two people named Shuyin and Lenne who were killed before Shuyin could use the world ending super weapon known as Vegnagun. Now back from the dead, it is Shuyin’s mission to use Vegnagun once again and destroy the world for the same reason any character in Final Fantasy wants to destroy the world. The main point of the game is to stop Shuyin and destroy Vegnagun to once again save the world.

I know, I skipped over so much about this game as it has over 40 hours of explore able content. But if I were to go through all the ins and outs of this game then this review would be 10 pages long just from the synopsis. With that said, let’s get going.

The Game Was a New Spin on a Predictable Franchise

Even from a stand point of a hardcore gamer who has rejected this games existence as a game in the Final Fantasy franchise, one thing that nobody can deny is that this game is unique. Considering the fact that protagonists in the Final Fantasy line includes Cloud, Squall, Tidus, and Lightning. It is a pretty decent change of pace to see a cheerful fun-loving group of characters to interact with.

I can completely understand the hate that YRP receives especially since it took Yuna who was a very quiet and conservative summoner and turned her into a sexy little dancer with boy shorts. But really I would much rather play a game where I am a bubble headed teenie bop girl than a whiney, self-absorbed, pseudo philosophical douchebag who only spouts out words that sound pretty when put in a sentence together. 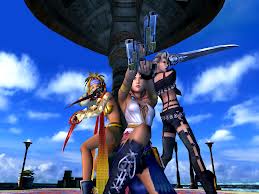 To discuss the problems of a sequel now is an effort in redundancy. We are all well aware of the problems that can arise from a sequel. So I will say this… This is a damn good sequel. It does not rehash old ideas or plot points from the FFX.

The story continues the narrative and shows a world that is a continuation of the events. It shows that characters have moved on with their lives. Some characters are not playable characters in this universe because their days of adventuring and fighting are past them. It shows that characters have put their past behind them and have found new professions, such as Yuna who was once a very shy summoner and now she is a fortune hunter with a bit of an attitude. Some might call foul on this, but I actually see it as a real progression of character. I do like that they did continue the narrative and did not fall into the horrible sequel tropes that so many fall victim to.

Gameplay Has So Much Content… Compared to Recent Games

This game is pretty damn large, especially for what is essentially a sequel to a popular game and by all accounts could have just been a complete cash in. It has nearly 40 hours of content and side missions that you can spend days just wondering around completing quests at your leisure. All things considered, it is a pretty immersive RPG and a fun one at that. Especially when you consider where the franchise went with FFXIII and the bullshit hallway that it brought to the table. 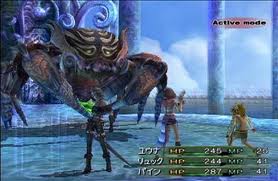 The Game Was Too Different and Alienated Its Fanbase

Innovation can be a tricky thing. If you want to try something different with your series, that is fine. But when you are as established as Final Fantasy, the problem is that you have a large fan base used to the norm and when that norm is changed… Well it can cause problems. The main problem with this game isn’t graphics or story. It is the fact that it changed so much of what it means to be a Final Fantasy game that it almost ceased being a Final Fantasy game. The mere concept of a fan service ridden bubbly J-Pop RPG is not exactly the first thing that comes to mind when you think this franchise. Whenever a game is created in a given franchise and you try something as new as FFX-2, you do risk alienating your fanbase and if you plan to do it, you have to deliver one hell of a game. Only problem is that it wasn’t the greatest attempt and thus fans were not happy with the end result.

A Lot of Content Like Dress Spheres, Garment Grids, and Spheres in General are Not Well Explained

This is a problem with several games in series such as this is that they leave a lot up to things that you are just supposed to accept. That the how a technology in this world operates is not what needs to be focused on, instead focusing on the story. Which kind of makes sense, but really there are a lot of things that do need to be explained whenever these technologies are so interwoven into the story.

For instance, I really do not need to know all of the mechanics of the flying machine that the Gullwings use in order to get from place to place. The Al Bhed Nation was a pretty advanced civilization so it would make sense that they would come up with a contraption such as that. However you do need to question the purpose of a garment grid, these dress spheres, and spheres in general that the girls collect throughout the game. It

The game never explains why the group is hunting for these spheres except that they contain knowledge of Spira’s past and somehow might lead to Tidus (I have no idea on that one). I suppose people in the real world spend lots of money on more frivolous and useless items as well. But compared to the daunting tasks that goes into finding these spheres, I do not think that the risk is at all worth the reward.

Then there is the garment grid and the dress spheres… This is something that is honestly never explained. Nobody else seems to have this technology other than the Gullwings and even the characters on the ship cannot thoroughly explain what they are or how they work. The character who creates it Shinra (yeah from FFVII just roll with it) when questioned about it says that he is just a kid. Even later when they exposit that Lenne’s spirit inhabits the Songstress Dress Sphere… This goes into all kinds of what the fuck territories? Does this mean these dress spheres contains souls and that the protagonists are now wearing the imprints of these souls? How are they able to harness this technology? None of this is explained throughout the game and these are things that need a little exposition behind them, especially whenever it is pointed out in the game.

I can completely understand the hate that some of the hardcore fans give this game. Hell just read my Resident Evil retrospective for proof of fan rage against a franchise. But at the same time, it cannot be denied that this is a pretty decent game. It is nowhere near the best of the franchise, but nowhere close to the worst. Especially where the franchise finds itself now. Ultimately FFX-2 is a fun and lighthearted adventure with tons of content and plenty of replayablility.

Thank you for reading. Please if you enjoyed this review, like and subscribe for more from me.