And with this post, I am at review 100! Thank you to everyone who follows me and reads my reviews. I really do appreciate it. I love doing this and I want to keep going from here and make this site bigger, better, and more awesome with each day. So with the first major milestone, I wanted to do something special. Some may think that The Cinema Snob Movie is an odd choice for my 100th review, but please let me explain. I could have reviewed a number of films that are either popular and/or infamous. There are even a number of films that hit me on a personal level… But instead what I wanted to do is review a film by a guy who got me into the realms of criticism in the first place.

So it is story time. A few years back a friend of mine named Colin told me of a video by Doug Walker’s Nostalgia Critic. Now whenever a friend tells me I need to check out a video on the internet, usually I sigh because that means that I am going to either spend the next 30 minutes watching a meme or someone getting kicked in the nuts. But I gave it a watch… And it was okay. Doug Walker is a really funny guy and I enjoy his work but after watching the video I was pretty much content. A few weeks passed and I was bored with nothing to do so I said fuck it, I returned to Channel Awesome’s site That Guy With The Glasses and watched a few videos of different critics. Then I found one by Brad Jones’ character The Cinema Snob called Alice in Wonderland: An X Rated Fantasy. I saw this and said… well Jesus I have to see this. I watched it and enjoyed it. After I found his other site and saw all of the things that Brad Jones does including making movies, his radio style show Radiodrome, Brad Tries, The Cinema Snob, and so much more I was thoroughly impressed. While I found him to be very funny and enjoyable to watch… But what really inspired me about Brad Jones was the amount of fun that exuded from each of his videos. While the other critics I saw appeared to have a good time and liked what they did, Brad’s whole site exudes it. He truly made reviewing look like so much fun and since then I have been trying to do my own review site and have never once regretted a second of it. So with that being said, that is why I am reviewing his recent film, The Cinema Snob movie.

The Cinema Snob Movie is the story of the ‘origin’ of Brad Jones’ character the Cinema Snob. It is the tale of Craig Gollightly, an exploitation film writer who along with his friend Neil are trying to get the rights to film their recent ‘blacksploitation’ film Black Angus. However they are stopped by a snooty film critic Dan Phillips who is the head of a film club that will not give them rights to film in town. In order to sway him, Craig goes undercover as a pretentious film critic and attends the meetings where they enjoy watching films like Being John Malkovich and stopping it every few seconds to talk about how much they like a certain aspect of the film. But all is not well in the world as members of the film club begin to be murdered one by one. It is up to Craig, Neil, and Dan’s wife Nancy to discover who the murderer is before they kill again.

The Film Takes a Great Jab at Snooty Film Critics

I love the ‘moral’ (if that is what you can call it) that this film presents. I think everyone knows that person or that critic out there that sees a movie like The Texas Chainsaw Massacre and stick their nose in the air saying ‘Please, I will watch real movies like The Godfather or Citizen Kane. I would not dare sully my eyes with a disgusting film like that.’

And yes I know they can be a pain in the ass. Each of them has this air about them that screams self-importance and that they are above the rest of the movie going crowd. I do enjoy that Jones not only acknowledges this but centers his whole film around something that I believe in 100%. That true criticism should come from personal opinion. That it is more of the question of ‘How do I feel about this?” than ‘What is the smart thing to say?’ It is done in a very respectful and very funny way and I for one find it to be one of the best aspects of the film.

It is a Fantastic Mystery and Take on Old ‘Giallo’ Films

It has been quite some time that I have seen or read a good mystery where I am not sure who the killer is. I have to give Jones a lot of props here, he had me stumped all the way to the conclusion. Their were moments where I even wondered if Craig himself was the killer just to fuck with me. The style of the film and the intensity that the film presents is much like classic Giallo films of the sixties and seventies. The dark setting, the sleazy characters, the music, the protagonist, and just about every point in between are very well done throwbacks to genre of film that has not been done well in quite some time.

Some Questionable Choices in Writing

There wasn’t a lot terribly wrong with the writing. I think the only real problem is that some of the jokes feel a little flat or out-of-place. The ones that really come to mind are the explanations of the death scenes post mortem and Dan Phillips exposits about what the killer did to the deceased bodies always followed by a shocked Cinema Snob stating something comical. Granted hearing a sentence like shoving a barbed wire bat up a man’s asshole may sound funny. But usually it makes me say ‘Well why didn’t we get to see them do that?’ Not that I would necessarily want to see that imagery and god knows this film would be taking a very dark turn if that were the case. But it just didn’t feel funny and the reiteration did not help that. 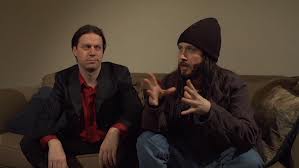 Also there are times when the message of criticism being more of finding what you as a person like and dislike about film instead of shoving your nose in the air and liking something because you are ‘supposed to like it’. The scene between Jones and Ed Glaser’s character is nothing short of perfect. It is expertly written and feels very heartfelt. The parody of the snooty critics is great and so is the jabs at Being John Malkovich which I agree with 100%… But there are some times where it feels very forced. The one that comes to mind is the scene where he is talking about Salo, 120 Days of Sodom. I understand completely that this is something that goes along with the Cinema Snob character since Jones did a review on the movie similar to the scene… But out of context it just feels like the Cinema Snob character is becoming the opposite of the snooty critics and is making fun of them just for having a different point of view. It isn’t terrible and the scene isn’t all that terrible either but I do feel like it missed some of the punch that it could have had.

The film is excellent. It is mysterious, it is hilarious, terrifying, and just down right fun all wrapped into one great package. Brad Jones really shows his love for film and his desire to put forth the best films that he can. I have an insane amount of respect for Jones to keep doing what he loves to do and entertaining so many people in the process. Soon he will be releasing his latest project Shot on Shitteo and I am really interested to see how it turns out.

Thank you for reading and supporting me for the past 100 reviews. I hope to keep them coming, keep this site running, and keep doing what I love to do. Please like and subscribe for more if you enjoyed this review.