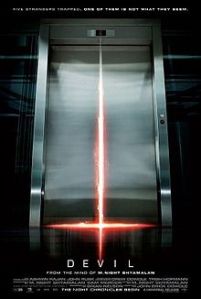 Well the good news is that through my horrible head cold and preparations for going to Bowling Green’s Humans vs. Zombies Invitational, Brandon and I were able to get a video recorded tonight. The bad news is that the video cannot be edited and ready for release until tomorrow… Thanks to that, I have an open spot in my review schedule. So with that said my Tuesday review has been moved up to Thursday.

So yeah… Let’s talk about our favorite one letter/two word punch line, M. Night Shyamalan. Poor Shyamalan… He really isn’t the worst director in the world. He has some good moments… Some really bad ones as well… But some good ones. I think his problem stems from the fact that he started his career hitting a grand slam and then spending the rest of his career in a slow-moving downward spiral. Kind of like the sports player who steps into the pros and has one stellar first season then the remainder of his career struggling in vain to recreate the magic of that fluke. Shyamalan has become the Hollywood joke that we know him as today. With films as hilariously bad as The Happening, The Village, and After Earth under his belt and then films that are just absolutely atrocious as The Last Airbender and Signs, Shyamalan is tragically a pretty easy mark. But even with all of that in his oeuvre he is still the man who brought us The Sixth Sense and Unbreakable. So we can at least give him some leeway. Today we are going to talk about a film that Shyamalan did not direct, but one that he produced and one that has all the markings of a Shyamalan film, Devil. The film was released in 2010 only a month in between this film and the aforementioned train wreck of The Last Airbender. It was a quiet all be it modest hit and in this critics opinion, was really released to earn back a little credibility to the struggling director after the Airbender disaster. The film grossed $64 million dollars being a strong success compared to its $10 million dollar budget and currently holds a %52 on Rotten Tomatoes.

Devil is the story of the ‘Devil’s Meeting’. A time when the Devil comes to Earth in order to claim the souls of mortals that he can bring to hell. It is said that in the ‘Devil’s Meeting’ anyone who interferes will die, a suicide always preludes the start of the Devil’s Meeting, and that there always has to be an audience to witness the Devil’s deeds. At an office building, five people board an elevator that abruptly stops. While two of the workers try to free the elevator one of the people is killed. The remaining story follows the people in the elevator, the security guards monitoring it, and the police detective trying to discover which one of them is the Devil and how they can save the others from their fate.

Great Concept and a Cool Representation of the Devil

The story itself of ‘The Devil’s Meeting’ I find to be really cool. I love how they can make a good suspenseful movie like this and do it with only a $10 million dollar budget. The story is simple, the concept is simple, and the actors while be it B List all do a really good job in their roles. The story of a Devil’s Meeting is a simple concept but a terrifying one since you are dealing with the Prince of Darkness himself and the only real special effect you need for the Devil is those damn glowing red eyes which by all accounts is pretty terrifying.

Then there is the portrayal of the Devil, which in this critics opinion is one of the best I have ever seen. There is no need for the red skins or the goat horns or the larger than life look to the Devil. The Devil is a minimalist in this version only taking the form of a human and never really changing shape from that. I also like the fact that the Devil… Is kind of reasonable in this version. He is by all means evil and ominous. But he does have a moral compass to him. A stern one but a moral compass none the less that he abides by. I really enjoy this about the film and find it one of the more endearing qualities to the film.

It is Predictable (Spoilers)

There are spoilers in here so you have been warned. Even from the trailers of the film you can pretty much tell how the film is going to go. There are five characters the Guard (Bokeem Woodbine), the young woman (Bojana Novakovic), the old woman (Jenny O’Hara), the salesman (Geoffrey Arend), and the mechanic (Logan Marshall-Green). Each of these five find themselves in the elevator for one reason or another and have been selected for the Devil’s Meeting. One of them of course is Satan. Can you guess which one it is?… If you guessed the old woman. Give yourself a cookie because you have common sense!

The film keeps playing it off as a type of who did it mystery between the five people and it is strongly alluded to that it is the mechanic or the young woman as the obvious targets. This fits very much into the Shyamalan concept of smoke and mirrors. The most likely one to be Satan turns out to be the antagonist. They even try half-hearted all be it to kill the old woman second and to throw people off the scent in a And Then There Were None style plot twist. Even watching the trailers I was able to call this with 100% accuracy. It is the old woman but they will ‘kill’ her first to throw everyone off its trail.

I wouldn’t find this much of a problem if it wasn’t for the fact that Shyamalan was on the creative team for this. He was the producer and I do expect a much bigger plot twist from him than the one that was presented. It really isn’t a problem because it is done pretty well and it isn’t really distracting… But for Shyamalan… I expected more.

It is Really Forgetable

The real problem with the film is that there really isn’t any stay power connected to it. When it comes to films associated with Shyamalan’s name, this is probably one of the last ones that will come up. Maybe it is because it followed the colossal failure that was The Last Airbender or maybe it is because the film just doesn’t have that one moment that really wows you. But it is one that will only be remembered from die hard fans and people who are obsessed with obscure film trivia.

Overall, this is one of the better films that Shyamalan has on his resume. It is simple, it is creative, and it is enjoyable. The Devil’s Meeting is a cool concept and The Devil himself is also really well done. It is executed well and overall just one of those films that you won’t mind seeing. If you have a few hours of free time and some Netflix, then definitely give it a watch.

Thank you for reading and as always if you enjoy this review please like and subscribe for more. Bowling Green Invitational this week, you should be there!