So who all wonders what would happen if you took the premise of Die Hard and put it in the White House with an actor who has only a fraction of the talent and charisma as Bruce Willis? Well I suppose you don’t have to hypothesize anymore because early this year, Olympus Has Fallen was able to deliver on your inquiries. I suppose I was destined to hate this movie. As impartial as I try to be when watching a movie I am going to review for this site, when you combine the fact that I am not a fan of Gerard Butler’s work in the slightest and also take away all originality… You pretty much are guaranteed to be on the top of the ‘Things I Can’t Stand to Sit Through’ list.

Olympus Has Fallen is the story of former Head of the Secret Service Mike Banning (Gerard Butler), a man who has taken a quiet desk job after an accident involving the President’s motorcade crashing due to some black ice on a bridge that results in the death of the First Lady (Ashley Judd). He quits his job with the Secret Service due to the fact that he had personal friendships with President Asher’s family (Aaron Eckhart), the First Lady, and their son Connor (Finley Jacobson) and the fact that he blames himself for the First Lady’s death haunts him. One day while the Prime Minister of South Korea Lee Tae-Woo (Keong Sim) visits the White House, Washington DC is attacked by a terrorist cell led by Kang Leonsuk (Rick Yune). They are able to take the White House and the President hostage, demanding that the US pull all forces out of the DMZ so that North and South Korea can be unified. (They are stated to clearly not be North Korean… But yeah they are totally North Korean). With the President being held hostage and the secret service mostly dead it is up to the Speaker of the House Allan Trumbell (Morgan Freeman) to negotiate with the terrorists and Mike Banning to go in and save the day John McClane style.

Morgan Freeman is Always Awesome and the Action can be Intense

I mean… It is Morgan Freeman. I really can’t think of a negative thing to say about the guy and this movie is no exception. I love the character that Morgan Freeman portrays in this film. Being the Speaker of the House and then thrust into the Presidential position in what would be one of the most troubling times in American History. I love the fact that Speaker Trumbull does not immediately jump into his new role as the President with a ‘Let’s get this shit done’ type of mentality. He seems very hesitant at first with a type of mentality that makes me think he is saying ‘Is there really anyone else more qualified than me?’ But eventually he seems to take on the role of the President better than Aaron Eckhart’s president who seems to be an action hero himself on level with the guy from Independence Day.

Also… Even though I have a problem with the lack of originality in this film and we will get into that in a second, I do have to give it up to director Antoine Fuqua… He knows how to make scenes intense and exciting. The battle on the White House lawn is pretty exciting as is other scenes that follow.

I personally have nothing against the guy. Everything I have seen of Gerard Butler off camera makes me think that he is a pretty cool and generous person… But I am just not a fan of his acting. He certainly doesn’t garner the hatred that I have saved up for Channing Tatum since I do think the guy has some acting merit, but he just isn’t for me. From his guttural screaming homoerotic fantasy flick 300, to his work with the Nicholas Sparks vomit inducing romances like PS I Love You, and on to the topic of today’s review I just can’t stand the guy’s acting.

They vary from film to film, but in the case of Olympus Has Fallen I find my main problem with Butler is the fact that he only seems to have two emotions, wallowing sadness and action hero. I suppose this could be the case for many action heroes but I would have liked a little bit more from him then just gruff man-body machismo. The moments that Butler is supposed to be emoting concern, grief, or sadness such as the times he is on the phone with his wife or grieving over the death of the First Lady it seems that Butler and the director is more concerned with making sure he keeps is gruff persona in check then to have any actual despair or remorse shown.

I freely admit that a lot of this might just be from the fact that I do not like Butler as an actor, but I still feel that my criticism is justified. 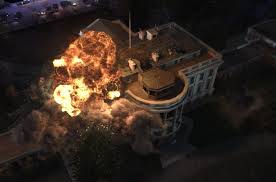 I said it in the beginning… This is just Die Hard if you had the location in the White House instead of a skyscraper. But not only that… It has all the tropes of an action film of the recent years. Unbearable shaky cam, quick cut shots, lots of explosions, generic ‘intense’ musical score that sounds like a note for note recreation of the Transformers films… It really has it all. For someone who is a fan of the action genre, I can completely understand how they could get enjoyment out of a movie like this… But that is really about all I see enjoying Olympus Has Fallen.

The story has been done several times over and the attack on Washington DC is used for shock value at best. I love action movies as much as the next guy, but I want a little bit of original content to my movies then just ‘rinse and repeat’ action flicks.

I just can’t find any way to like this film. Morgan Freeman is great and it is action packed… But it is a very generic kind of action, a early 2010’s kind of action. It has all the tropes that I find annoying about the action movie film scene today and Gerard Butler just grates on my nerves.

Thank you for reading and as always if you enjoyed this review then please like and subscribe for more. I am also pleased to announce that I have joined my good friend Jessica Stafford on her blog From One Sucky Life to the Next. Please give it a look. It really is a cool site and I’m excited to be apart of it. I will see you next Thursday for a new video from myself and Brandon.