So while I was visiting my parents for Thanksgiving, I happened to be flipping through the movie channels while I am trying to kill time and low and behold on HBO Family was a movie I hadn’t seen since I was a young child, the Looney Tunes movie, Michael Jordan epic, and ode to the 1990’s Space Jam. There has been a running theme this past season as I have gone to various parties including a certain friend of mine (you know who you are!) who whenever the Space Jam song played would break out into rap as we rocketed our way back in time to the nineties.

The story of Space Jam takes place in both our planet Earth as well as Looney Tune Land. After retiring from basketball, Michael Jordan is trying to play professional baseball… Which is working out as well as his actual professional baseball career went. Meanwhile our favorite group of cartoon characters has found themselves in a bit of a predicament as they are being held hostage by a group of bugs from the far away planet called ‘Moron Mountain’, a failing amusement park that wants to force the Looney Tunes into slavery to bring in new attractions. However all is not lost. The Looney Tunes have the opportunity to defend themselves. They choose a basketball game seeing as how the aliens are short in stature it will be a quick game… But when the aliens ‘steal’ the basketball talent from some of the best players in the NBA (as of the 1990’s that is) they become gigantic Basketball playing monsters. In order to stand a chance the Looney Tunes recruits the help of Michael Jordan and convince him to come out of retirement and save them all from a lifetime of slavery… That may have been the oddest synopsis I have ever given in the history of this website.

The Movie Has an Insane Charisma to It

You cannot deny that this movie has a personality to it. It has an energy that a lot of films can only hope to achieve. Say what you will about quality… A movie that features Looney Tunes teaming up with NBA icons… You at least will never forget it after you saw it. It also helps when you have a man with the charisma of Michael Jordan on-screen whose personality alone can work off of characters like the Looney Tunes. Each time you are watching you will get the feeling of ‘You know… I just can’t hate this movie.’ It is just too goofy and self-aware of its goofiness to be disliked.

You knew it was coming. For anyone who has seen the movie or knows anything about Space Jam, you knew this shit was just one scroll down the page. This soundtrack… This soundtrack went Double Platinum in two months and hit #2 on Billboard Top 200 and by 2001 it went from 6x Platinum… DAMN! That is insanity. Let me give you just a little list of the songs that are on this album. “I Believe I Can Fly” by R. Kelley, “Basketball Jones” by Tommy Chong and Cheech, “Fly Like an Eagle” by Seal, and naturally “Space Jam” by the Quad City DJ’s.

This thing was a musical juggernaut! Some of the most memorable songs of the 90’s came from this one CD and all things considered it was more of a hit than the actual movie was.

Michael Jordan is kind of the exception to this rule as the guy has a decent presence on camera and has great reaction to what is mostly green screened nothingness in a studio. But the others in this movie. Patrick Ewing, Charles Barkley, Bradley, Bogues, and Johnson… There is a reason that they are NBA stars and not actors. It is kind of sad because they really aren’t in the movie that long and god love them they are really trying. But every time they were on-screen you could just see the ‘fish out of water’ look on their face and watch them trying to keep remembering their lines. I don’t want to give too much hell to them especially since they aren’t in the movie that much… But it is usually pretty painful to watch. 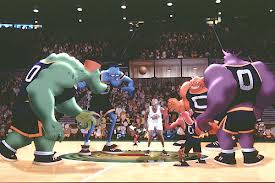 Not since Mac and Me have I seen a movie that is so blatant about the obscene amounts of produce placement they shove in a movie… And that movie had a ten minute sequence of random dancing at a McDonalds. First off the obvious one is the National Basketball Association which is put front row center throughout the entire movie with several of your old favorite superstars making an appearance. Not to mention the whole selling point of bringing Looney Tunes to a new generation of kids. ESPN is not as bad but it does appear multiple times… And then there is the scene with Wayne Knight bursting into Michael Jordan’s bedroom and listing off every damn advertisement the man has ever endorsed. No joke this man kicks down Jordan’s bedroom door like he owns the place and just says Jordan get up, put on your Hanes, your Nike Shoes, get a Big Mac… Who else sponsored this movie? (Paraphrased of course). As a kid it blows past your head… But as an adult you are sitting their mouth a hanging wide open in sheer amazement that a movie would be that blatant about their pandering.

Space Jam just is the 90’s and with the references it makes, it really hasn’t aged well at all. I suppose that is how it goes. Whenever you base the whole premise of your movie around very ‘seasoned’ cartoon characters who all be it timeless are quickly finding a home on the more ‘Nostalgic’ channels as well as professional athletes who have expiration dates on their careers… At that point you have the longevity of milk instead of wine.

Now your Michael Jordan’s, Patrick Ewing’s, and Charles Barkley’s of the world are pretty well etched in NBA history… But other than that I would love to know anyone who did not watch the NBA in the 90’s talk about Muggsy Bogues, Larry Johnson, and Shawn Bradley in any great detail. Not that they are not fantastic talents, but just not as big of star power as the others.

The movie is too niche to be any kind of timeless classic. ’90’s kids’ as we are being called nowadays (I include myself in this group) can watch and re watch a movie like Space Jam and never get sick of it. But all other members of society would see a movie like this, shrug their shoulders, and be done with it. 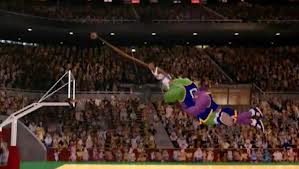 This movie should be placed in a time capsule because it is one of those films that is a true product of its time. The music, the action, and the story are a true representation of how children saw the 1990’s. It is goofy, it is cheesy, and it is… well loony. For anyone who wasn’t a kid in the 90’s, I would say that it is a decent one off watch. But if you were growing up in that era… Be prepared for a journey back in time.

Thank you for reading and as always please like and subscribe for more reviews and videos from me.