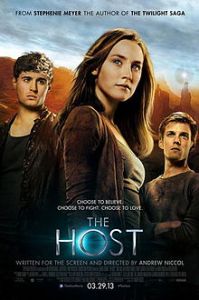 Oh God… Oh God, why? To say I am not a fan of Stephenie Meyer would be a moot point at this junction. I am not her target audience, I have never liked her stuff, and if you do that is cool. But it isn’t for me. The Twilight “Saga” is a terrible movie series (I haven’t read the books so I cannot comment on them)… but I can see the appeal of the film towards its target audience. It has its fan base built in and at the very worst if you are forced to watch it, you can at least enjoy actors like Michael Sheen and the guy who plays Mustache Dad just ham it up on screen or take comfort in the fact that Robert Pattinson is in a whole different level of hell while he is on screen since he has gone on record several times saying that he hates the film series with a burning passion.

But The Host… I just cannot fathom what Meyer was thinking when she created this story or what the creators of this film were thinking when they made it. I do not know how anyone, even in the target audience can find anything remotely enjoyable about this movie. This movie… This movie really is something special. This is Battlefield Earth level of bad movies. This is The Last Airbender level of bad movie… This movie is just god awful on every single level of film making imaginable. I find it hard as a critic to review this film, because the sheer thought of its existence feels me with regret that I actually sat through it.

The story is straight out of Invasion of the Body Snatchers. In this world, the human race has been assimilated into an alien species known as souls who occupy the body and are identified by a strange silver ring in their eyes known as ‘Souls’. The stories protagonist Melanie Stryder (Saoirse Ronan… Jesus which one sounds like the alien name to you?), a girl who has been infused with one of the ‘souls’ called ‘Wanderer.’  Now instead of consuming her personality, Melanie’s desire to make it back to her boyfriend Jared (Max Irons) is so damn strong she completely overrides the aliens control who seems so impressed by this that she decides to assist her via annoying internal monologue.

She meets Jared and her family in the desert where they are met with some hostility due to the fact that they are an alien species who is taking over the human population and what not. Well eventually they begin to gain their trust and one of the violent males who accosted her earlier of course has a soft side that is just begging to be released by a girl who understands him. His name is Ian (Jake Abel) and he begins to fall in love with ‘Not’ Melanie, but instead the ‘Soul’ in Melanie’s body. Add in the fact that the enemy Seeker (Diane Kruger) who wants to get Melanie back into the fray and you have a villain and your love triangle.

This is one area where the film just didn’t execute correctly. I can see what they were going with. They wanted to establish the fight between Melanie and the entity known as Wanderer so they would have a monologue/inner struggle between the two characters… It just didn’t help that it was the most annoying, teeth grating crap that I have had the misfortune to sit through. Every time that damn voice started talking I wanted to mute the television. Any time it was building suspense or emotion, it was killed by a damn voice over practically narrating Melanie’s every action.

Say what you will about Edward and Jacob from Twilight and trust me there is plenty to say AND the Internet has said it over and over and over again. AT LEAST you know who the Edward and Jacob characters are. When the two are on screen you can at least tell the two apart. They have unique characteristics and personalities… In this movie… I honestly can’t tell the two male leads apart and I usually have no problem quickly identifying characters and faces. I would honestly make the claim that the human race invented cloning at some point because these two dudes look like they are straight out of a Teen Disney Cloning Lab. They look the same, they dress the same, and they fucking act the same. Honestly I do not see what the big deal is for this Melanie girl. Just flip a damn coin. Either way you are getting the same guy.

The Fact that the Film Focuses on the Wrong Fucking Story

I will give Stephenie Meyer this… She can build a world. The concept of these symbiotic/parasitic (I’m not really sure which) alien species is an interesting concept. Not to mention any apocalyptic setting I can at least find some interest in. Take away the fact that you can outsmart these aliens by wearing sunglasses or contact lenses and the premise isn’t terrible. I would say in the right hands, this story could be something about the ideas of free will and actually fighting a change that might be more beneficial to the human race than detrimental and the only thing holding us back is our fear of the unknown… The problem is that Meyer always focuses on the wrong damn story!

None of this is addressed in the story or if it is it is barely touched upon. The whole story focuses around this love triangle between Melanie/Wanderer/Wanda/Whatever, Jared, and Ian that compared to the rest of the world, feels completely inconsequential. This strange love triangle really has very little to nothing at all to do with the grand scheme of things. Their is an alien race who is assimilating our species into their own and a large resistance movement trying to prevent this. That alone warrants a great amount of intrigue in my book. But instead we focus on who Melanie/Wanderer will end up with, Violent but Nurturing Pretty Boy Number 1 or Violent but Nurturing Pretty Boy Number 2. I want to see the movie about this resistance. I want to see a fight for the human race or a fight for these two species to coexist together with the love story being a secondary thing… Not all this interesting stuff in the background as they focus on which dude this chick is going to bone.

This movie is one of those things that you have to see. Just to watch how terrible it is. It is one of those special movies where you invite friends over, have a few drinks, make popcorn, and tear the thing a new asshole MST3K style. It is bad in just about every way a film can be bad. Unless you are watching it to enjoy its badness, I recommend you stay as far away from it as possible.

5 thoughts on “Tanner Reviews The Host”