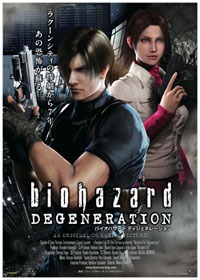 A long time ago, back when the concept of this site was in the works; I created a video where I reviewed Resident Evil Degeneration. Now, I think I deleted it from YouTube… But if I did not and you happen to stumble across it, I implore you to please turn down your volume before you push play. I apparently forgot that I could project my voice in that video and I spend the vast majority of the fifteen minutes screaming at the camera lens like a deranged lunatic. But either way I thought I would give it another go in a much more… sane attempt to review the movie. So… On to Resident Evil Degeneration.

I have come to the conclusion that as long as this site exists, Resident Evil is just going to be a thing that appears from time to time. I covered the retrospective of all of the games. But there are still just so many more things to look at, that horrendously bad movie franchise by Paul WS Anderson that is the bane of my existence. The new animated movie franchise that includes this film and the latest release Resident Evil Damnation which we will get to at a later date. We also cannot forget the gaming franchise is still going… All be it in dire straits. So yeah… Resident Evil is something that just isn’t going to go away as far as this site is concerned.

So Resident Evil: Degeneration… Unlike the abomination that is the live action movies, the animated movies are in canon with the video game universe. Resident Evil: Degeneration takes place in between Resident Evil 4 and Resident Evil 5 and features two of our favorite protagonists, everyone’s favorite asskicking girl next door Claire Redfield and rookie cop turned into ultimate monotone badass Leon S. Kennedy. As of 2005, T-Virus and G-Virus outbreaks have been springing up all over the world as other pharmaceutical companies like WilPharma are being put on trial for creating BOWs. Claire Redfield, now a member of the Anti-BOW group TerraSave. While traveling to the New England town of Harvardville, that happens to be the location of mass protests for the stereotypical evil Senator Ron Davis. Well of course, this is the perfect recipe for zombie outbreak. A plane carrying a bunch of zombies smashes into the airport and shit gets real. Well coincidence of all coincidences Leon S Kennedy is sent in to save the survivors and clean up the mess as he teams up with his old zombie survival partner once again.

The Animation is Great

Other then the lip movement which can appear a little stilted at times, the animation is really good. Using a similar animation style that they used in RE 4, the characters look very realistic and well rendered. The backgrounds look pretty cool and the whole feel of the game gives me the feeling of playing a Resident Evil game.

Apparently in the Resident Evil Universe, Pharmaceutical Companies are the Devil

This is a criticism of the entire Resident Evil franchise, not just this movie… But apparently in this Resident Evil universe pharmaceutical companies are just the most evil entity since Satan started the whole ‘Hell’ thing. Umbrella Inc. of course is the big bad. But thanks to this movie we can add pharmaceutical companies like Tricell and WilPharma to the mix who are also doing their fair share of underhanded dealings. If we are going by Resident Evil logic, it isn’t the Taliban, Al Qaida, or banksters its Rite-Aid! Who would think they would be the evil masterminds of the world?

I am not a big fan of Leon Kennedy. But I do get it. He was very popular after his appearance in RE 2 and after RE 4, the character became one of if not the most popular character in the franchise. He is a pretty cool character, all things considered at least he was in RE 4 when he was new to the whole ‘special agent’ thing. But in this movie… He is the most bland and boring character that could ever exist. The voice actor who plays him transitions from two levels of emoting… monotone and slightly louder monotone. I get it that Leon is supposed to be this grizzled veteran… But come on SHOW A LITTLE EMOTION! The animation and the acting makes me think that all Leon is just too bored to give a rats ass about anyone on screen.

The movie is paced like a television show. It feels like three 20 minute long episodes than it does a 90 minute long movie. Their are three completely separate climaxes in the movie and several 10 minute long lulls in the story that make it feel very exhausting watch. Just after the group of survivors make it out of the airport you question what they are going to do with the next 45 minutes of the movie.

The first part in the airport is clearly the best and most Resident Evil esque out of all the three. The other two feature Leon Kennedy’s ‘partner’ Angela Miller and her brother Curtis. He is the antagonist of the film and the guy who started the whole outbreak in a very ‘pseudo philosophical bullshit’ fashion. He of course becomes a G-Virus monster and tries to fuck everyone’s day up. The other two are somewhat boring and I quickly lost interest in the rest of the movies ‘episodes’.

This movie a okay. It isn’t great but it isn’t terrible. If you are a fan of the series like I am, I would say pick it up and give it a watch. I’m pretty sure it is on Netflix too so you can watch it on there as well. But if you are not a fan of the series than this is a pretty terrible place to start. It isn’t a good representation of any of the characters and the pacing is terrible. I would say play any of the games before giving this a watch.

Thank you for reading. Please return Sunday for another new release review from me and on Tuesday for another installment of Cheesy Romance Month. Until then please like and subscribe for more from me.