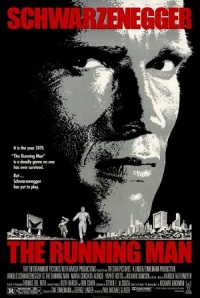 I have returned at a long weekend in Youngstown Ohio for YSU’s first HvZ Invitational. It was a fantastic experience and thanks to all the moderators who made the game possible. With that being said, I was unable to prepare much for today’s review so I thought I would tackle something easy and what could be easier than a 1980’s Arnold Schwarzenegger movie that is loosely (and I do mean LOOSELY) based off of a Stephen King novel called The Running Man. A movie that is one of the many fine examples of the ‘futuristic world’ as seen through the scope of 1980’s technology. It is a world where the keyboards are humongous, the fences are ‘futuristic’ but impractical, full body singlets rule the world of fashion, cheesy work out videos, and murderous game shows that combine Battle Royale and The Price is Right together in one unholy bond.

The Running Man is set in the soon to be present day year of 2017. The United States has fallen into Anarchy as food, gas, and water have fallen into short supply. What is left of society is now run in a police state. While most of society lives in the slums, there still is a thriving society of people who go about their every days lives. A show that has gained massive popularity is a show called The Running Man hosted by smarmy game show host Damon Killian (Richard Dawson). The show puts convicted convicts into a gladiatorial style arena where they can fight for their freedom against a handful of rather colorful opponents known as ‘stalkers’. The show is highly controversial and one of the main proponents that an underground freedom fighting cell uses to stage their coup d’etat against the government.

One of the latest reluctant participants is a man named Ben Richards (Arnold Schwarzenegger). He is a former police officer who was arrested after refusing to fire on unarmed civilians staging a peaceful protest. He is later framed and given the infamous nickname ‘The Butcher of Bakersfield”. After being forced onto ‘The Running Man’, Richards must fight his way through a slew of colorful bad guys and help the resistance bring down the government and the corrupt show.

Thank the Movie Making Gods that they got none other than game show host legend Richard Dawson himself to play the part of the eccentric, nefarious, and all around laughably evil host of The Running Man, Damon Killian. Dawson brings that Hollywood cheese to his role as he riles up the audience and goes from person to person to casually discuss which of the stalkers will violently murder each of the four contestants. He has all the makings of a sleazy power-hungry Hollywood socialite. Thanks to him being in the movie, it is almost like watching Family Feud but with gruesome murder. This past not only helped Dawson in his role, but also gave a nice wave of nostalgia for anyone who had been a fan of his work in the past and to see him in such a villainous, yet comfortable role.

To put any actor except a seasoned game show host the likes of Dawson would have been a terrible mistake and will stand as a sign of expert casting on the part of the movie.

Just like I said in my Far Cry 3: Blood Dragon review, I love 1980’s ‘futuristic movies’. Apparently everyone thought that once 30 years had passed, the whole world was just descended into the tenth level of hell as society crumbles and this dystopian police state would just creep to the surface. I love the grit that comes along with them in the slums and how the people of the past thought the future would go with some technology still far beyond our reach… And yet some technology that is so out of date you cannot help but laugh at how useless the technology would be in this day and age. The mere concept of rocket packs are still so far out of our reach that we cannot fathom one that can be used for a television show and yet computers with simplistic 6 digit pass codes that require you to walk outside in order for you to get a strong enough signal is laughably inept in a day where tablets are a regular occurrence. The future seen through the eyes of a 1980’s scope is always a fun experience. The techno music, the dirty slums, the colorful future, and all of it complete with ‘futuristic’ 80’s styles just makes for a wonderful sit through.

It is a Pretty Bad Adaptation 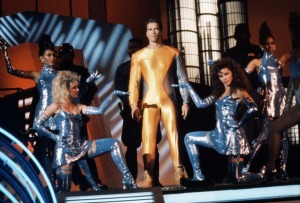 Compared to Stephen King’s original book, this is a pretty shitty adaptation. This does not necessarily have to be a terrible thing. Stanley Kubrick’s The Shining was also a terrible adaptation of the original novel, but one hell of a great movie. The reason it fits into the con category is because, in my opinion Stephen King’s (penned under his pseudonym Richard Bachman) is a far better story than the one presented in this movie. Do not get me wrong, The Running Man movie is a really fun action packed popcorn movie. Schwarzenegger is his regular action packed goofy self, Richard Dawson nails it as the eccentric and nefarious game show host of The Running Man, not to mention the dystopian future is always fun. But the original story of The Running Man is in my opinion a far better story than the one given to us in this movie.

Unlike the movie, Ben Richards is sent on a 30 day hunt where he is allowed to go anywhere that he chooses and collects money for every hunter/police officer that he kills. If he survives the 30 days then he wins $1 billion dollars and his freedom. There is no arena or colorful pro wrestling style bad guys, just one man being chased by the corrupt police state across the Northeast United States. Ben Richards is not some valiant soldier who was black mailed, but a volunteer desperate for cash and a family to support. The ending is one of King’s better ending that is bittersweet and well executed.

It isn’t a bad movie and I can see why the changes were made, but personally I would have enjoyed seeing a movie that held more true to the very well done source material than what was provided in the movie.

I know it is kind of misnomer to attack a Schwarzenegger movie for its hokey acting, but Arnold is not the only goofball of an actor in this movie. While Arnold is his same goofy, mugging, and by all accounts enjoyable self. We have the whole other cast of actors and actresses that ramp up the level of cheese to the point that I find it hard to take it seriously. The cast of stalkers is played by a slew of former football legends and professional wrestlers which includes Jesse Ventura, Professor Tanaka, and football legend Jim Brown. All of which play up their role as eccentric murderers but with the hamming provided by them, in particular with Ventura mugging at the camera every chance he gets, it is hard to not see this movie as unintentionally hilarious.

Other actors that pile on to this are Maria Conchita Alonso who plays Amber Mendez and Erland Van Lidth De Jeude who plays Dynamo. Conchita Alonso would later go on to regenerate into Salma Hayek so I guess she has that going for her. But as far as the movie is concerned, her acting at best can be described as a spunky, fiery latina and not much further than that.

Van Lidth De Jeude I’m well aware tragically passed away shortly after filming The Running Man due to a heart attack. But still this should not discount the fact that the guy comes across as an hilariously goofy nutjob who has a fascination with wanting to sexually assault the Mendez character. I suppose the bad acting can attribute to the goofy enjoyment of the movie… But still it is so noticeable that I can’t leave it untouched.

This movie is a lot of fun. I can pick on it all day for some bad acting and the fact that it wasn’t the greatest adaptation of a book (shocker for Hollywood I know). But overall it is just so damn likable. The setting is interesting and the world is rich and interesting. Richard Dawson steals the show as the eccentric game show host and of course Arnold being Arnold is a ton of fun as well. Overall it is worth the watch.

Thank you for reading, please return tomorrow for another review from me and a new video on Thursday. If you enjoyed this review, then please like and subscribe for more.