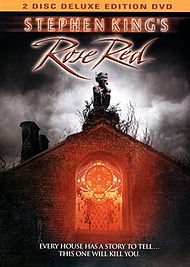 After I released my list of my Top 10 Guilty Pleasures, my roommate decided to sit me down and show me what was once one of her favorite horror movies of all time. Because the screenplay was written by Stephen King. Well knowing me, I’m always up for a Stephen King Miniseries no matter what the occasion is. So I decided to sit down and give it a watch with her. Just as I said in my guilty pleasures list, there was no way that I was going to dislike this movie, either for the good reasons or the bad. But in this case the good. Rose Red was a surprisingly suspenseful, thrilling, and entertaining watch.

Rose Red is the story of a haunted house in Seattle Washington. Dr. Joyce Reardon (Nancy Travis) of Seattle University is studying a haunted house in the center of Seattle, The Rimbauer Estate or by its colloquial term, Rose Red. The last remaining descendant of the Rimbauer family, Steven Rimbauer (Matt Keesler) has decided to have the building leveled due in part of wanting no part of the haunted and bloody mansion. Rose Red has a very auspicious history as several people have either died or disappeared while living in its halls. In order to channel the cosmic energies of the mansion, Joyce collects a group of people with psychic powers to investigate the mansion. These people include Rimbauer who is merely there to oversee that his family’s estate is treated with respect, Nick Hardaway (Julian Sands) a telepathic psychologist, Cathy Kramer (Judith Ivey) who specializes in automatic writing, Pam Asbury (Emily Deschenal) a psychic television personality, Emery Waterman (Matt Ross) who specializes in retrocognition, a precognitive Vic Kandinsky (Kevin Tighe), and finally Annie Wheaton (Kimberly J Brown) a young girl with powerful telekinetic abilities and her sister Rachel (Melanie Lynskey).

The crew of psychics enter the house and are immediately pleased/terrified to learn of just how spiritually unstable the house really is. Each of the group experiences different psychic episodes and soon the house begins to pick off the would be heroes one by one, trapping the group inside of Rose Red.

It Builds Suspense and Does not Rely on Jump Scares

I love it when a horror movie does not stoop to using cheap jump scares to generate ‘terror’. Jump scares are not a terrible thing, I’ve said this before. But if that is the only thing generating the horror in your horror movie, then you do not have a horror movie, you have ninety minutes of annoyance. This film does not rely so much on jump scares as much as it uses the knowledge of them to its advantage. There are several scenes in the movie that builds the traditional jump scare suspense, but then let’s the tension slowly die. You are bracing yourself for that big scare, but it never really comes which makes the film all that more terrifying. At one point you are almost begging the film to have something jump out at you just to release some of the tension that the film builds up and releases in one large climax.

Well Acted by Some Underrated Actors and Actresses

One thing that the Stephen King miniseries brings is a list of actors and actresses that do not tend to hit the A-List radar. Some of these are for obviously good reasons such as Bronson Pinchot who plays Craig Toomey in The Langoliers, who had to learn the hard way that he is more suited for the realms of comedy that made him famous instead of horror. You can also say that about the majority of the cast who were in the ungodly abomination that was the adaptation of The Mist.

Rose Red is another one of those cases where you have a cast of actors and actresses that were destined to live out the modest careers of B-Movie Stardom. Matt Ross who plays Emery Waterman does a great job in his performance and has been in other roles on shows like CSI. He does a great job in this movie as well, playing a somewhat psychotic and narcissistic momma’s boy. Kevin Tighe and Julian Sands also put forth amazing performances as does Emily Deschanel who is often overshadowed by her much more popular and equally talented sister, Zoey.

But out of the whole cast, the one that steals the show is Tsidii Le Loka who plays Ellen Rimbauer’s servant Sukeena. The South African actress does a phenomenal job in her role and it is a shame that she does not have more notoriety then she deserves.

Just like every other miniseries you can play the game, name the Stephen King stereotype. Just about every character in this movie can fit one of the many stereotypes that Stephen King’s characters are known for. Well hell, just the fact that you have an ensemble cast such as this equals one Stephen King stereotype point. But now let’s look at the cast itself. We have the short-haired, tough as nails guy who sacrifices himself for the good of others, one point. We have the somewhat psychotic nerdy guy, check. We have the young child who has psychic/telekinetic powers, check and we have a smarmy little douche who quickly gets his comeuppance, check. As much as I love King’s writing, the man does tend to recycle characters which does become a problem after you seen them over and over again.

Dammit Stephen! I love your books, I love your writing. But man you do not know when to just let something lie. I had the same critique when it came to the book Duma Key. You have a great story and then you toss in something weird that makes people say… Huh? Does Ellen Rimbauer need to be anything other than a spectral inhabitant? This area is kind of fuzzy as you get into the third act of the film, but apparently from the exposition given, Ellen is still ‘alive’ (I use those quotes heavily) as a sort of ‘vampire’ as the line would suggest.

I’m not sure what this means as it is never made very clear just what Ellen Rimbauer is and near the end you see her flying like a ghost at them, looking like some sort of vampire hellspawn… I’m not sure what she was in the end. But adding lines like that does nothing but confuse people and having it that close to the climax makes your audience sit there and say ‘wait… what the… what?’

Rose Red isn’t the best Stephen King mini series, but it certainly isn’t the worst. It is one that may get overshadowed by King’s more popular and more infamous miniseries, like The Stand, It, or Storm of the Century. But that should not take away from what is by all accounts a very suspenseful and enjoyable horror movie. It avoids annoying jump scares and builds a solid atmosphere and mythos around the setting it presents. All things considered, it is one of the best horror movies I have seen to come out of the abysmal horror genre of the 2000’s.

Thank you for reading and as always if you enjoyed this review then please like and subscribe for more. Also check out my other site The Nerd Realm for more from me and my fellow contributors Brandon Lias and Shaila Meeker.