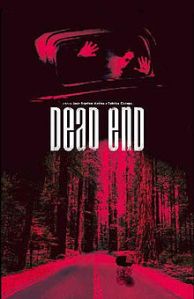 Let’s talk about horror movies, in particular let’s talk about horror movies made from 2000-2009. This time period is without a doubt in my mind the worst decade for the entire genre. It is the time after the 1990’s ironic horror genre that gave us movies such as The Faculty and more importantly the Scream franchise. Combine this with the slasher genre of the 1980s and you have the combination of horrific movies that made horror almost unwatchable until recent years. While there have been a few shining rays of light such as the Saw series, for the most part the genre has been marred with movies like The Collector, Hostel, The Human Centipede, countless horrific remakes which include Rob Zombie’s Halloween, and Final Destination. So today I wish to talk about another one of these horrific stinkers from this genre, the 2003 movie Dead End. Directed by Jean Batiste Andrea and starring Alexandra Holden and Ray Wise this film represents better than many films of the genre a movie that had great potential but was ruined by the time in which it was created.

Dead End is the story of a family of four and the boyfriend of the oldest daughter are traveling to visit family on Christmas Eve. The family consists of Frank Harrington (Ray Wise), his wife Laura (Lin Shaye), their daughter Marion (Alexandra Holden), her boyfriend Brad (Billy Asher), and their son Richard (Mick Cain). While driving late at night, Frank falls asleep at the wheel and nearly wrecks into an oncoming car. In the chaos, Frank and the family finds themselves on an old back road in the middle of nowhere. Lost the family drives down the long stretch of highway in search of any signs of life. When they run into an enigmatic woman dressed in white (Amber Smith), things become strange as Brad is taken away in an old black hearse and later found dead on the side of the road. The story then follows the family as they travel down the highway, attempting to find their way out of the woods and avoid the woman in white.

A Decent Concept, But Wasted Potential

The concept is definitely there and given the right hands, this movie could have been something. Delving into the idea of death and what goes through a person’s mind after such a traumatic experience  could have made for a great psychological horror film. it even has some good foreshadowing sprinkled into the narrative. There is some good stuff in there. Too bad it is wasted on horror movie tropes such as terrible characters, forced ‘implied’ gore, and a focus more on people getting bumped off one by one then the real meat and potatoes of the film, that is the concept of what happens in the darkness as you straddle the living world and the dead world. If this film was made either during a different time or with a director who had enough tact to know the gem that he had on his hands then this movie could have been something.

Before people jumping on my back saying, ‘Tanner what is this was the directors vision? What if he didn’t want to make a psychological thriller and wanted to make a horror movie? You are usually one of the ones who likes a movie for doing what it intended to do!’ Well to answer that question, it is very clear that this movie had the purpose of being a representation of these character’s deaths just moments after the car crash and yet all we get is these characters being pumped off in some somewhat gruesome fashions before the film finally and gratefully ends. It was clear this film was meant to be something more than just a generic horror film and yet that is what the end product we got. So with that it has failed at its original goal.

These characters are absolutely horrible and they truly represent one of the biggest problems with the horror movie genre of the 2000’s. The idea of making either unlikable or unrelatable characters so that whenever the characters die, we do not have to feel sorry for them. So it makes the movie completely pointless to watch unless you are just a misanthrope who wants to watch people suffer and die for ninety minutes. The cast does not feel like a suburban family traveling to a Christmas dinner, but a collection of soon to be dead people. The boyfriend Brad Miller is just a body to die, Richard is an ungodly annoying walking teenage stoner stereotype, the female lead has absolutely no character or personality, and the parents just feel like they are supposed to argue with each other before they finally get bumped off. All of this is made even worse by the fact that the acting is just terrible.

While actress Lin Shaye puts forth a decent performance as mother Laura Harrington and even though I absolutely hate the character Mick Cain does a good job at playing an annoying little shit stain of a teenage stoner who I was very happy to see finally die in the Richard character, the remaining cast that comprise this movie is absolutely horrible. They are horrible caricatures of a dysfunctional suburban family. While the script is horribly written, actors can make some of the worst parts passable if given the right time and effort. Just look at Shaye’s performance for proof of that. But the others only take badly written characters and make them worse with horrific ham-fisted acting.

Ray Wise who is usually a decent actor in the parts that I have seen him in before, does not come across as a frustrated father, but more of a mentally unstable jackass who will punch his wife and daughter at the thought of being afraid. He has no arc to him and Wise does nothing to assist this. But the actor who wins the absolutely appalling job goes to Alexandra Holden who plays Marion. For a leading lady of the film, the Marion character sure does spend a whole lot of time doing nothing, this made no better by Alexandra Holden who simply feels like nothing more than a prop with a sign hanging around her neck saying ‘here is the survivor’. She is said to be a psychologist and a damn good one too, yet we never see this and for the longest time I thought she was just the slightly older teenage sister to Richard, not a woman with her degree and out of college. She seems just somewhat upset at the concept of her brother, mother, and father dying and turns catatonic at the notion of her boyfriend who she was going to separate with gets killed. Bad acting and bad writing are by far the for front of this movie.

Thank you for reading and as always if you enjoyed this review please like and subscribe for more.