I’ve made it clear in the past that I do not like Adam Sandler’s style of comedy or acting. Nothing against the guy since everything I have seen of the guy is actually not that bad. But when it comes to his humor and his movies, they quickly lost any and all appeal to me when I stopped being a teenager. At this point in his career, Sandler has even stated that one of the main reasons he even does movies anymore is to get the free vacation while being paid to be on set and make shit and piss jokes for two hours. His Frat Pack of friends and actors have collectively swept up more Razzie nominations then I dare to count and even one year completely sweeping the entire event with the ‘What the fuck were they thinking?!’ movie Jack and Jill. Why am I saying all of this? Well because I’m about to praise him and I wanted to throw an obvious curve ball that is why! Yes, for those who follow my site will remember that I discussed Happy Gilmore in one of my Top 10 Guilty Pleasures. But now as I write this I have to say that that is a bit of a misnomer. Because a guilty pleasure insinuates that a movie is bad but you like it for some reason. I would actually make the argument that this movie is good, easily one of Sandler’s best. It was good enough after all that it would later make up half of Sandler’s production company Happy Madison alongside Billy Madison. All thins considered, looking back on the movie even from an adult stand point… I have very little negative to say about it. It is a legitimate good movie.

Since an early age our Happy Gilmore (Adam Sandler) always knew that he wanted to play hockey. But as much as he practiced and tried out his poor skills and hot-headed temper always found him off the list. One day after learning that a bank is foreclosing on his eccentric grandmother’s house, Happy learns that due to his excellent slap shot, he is a very talented golfer (not the strongest putter). This draws the eye of famous golfer Chubbs Peterson (Carl Weathers) who wishes to train the hot-shot newcomer and after a tournament, Happy finds himself on the Pro Tour surrounded by tightwad golfers as a means to buy back his grandmother’s house. Happy brings in a large crowd with his goofy antics and angered temper and is hated by pro golfing legend Shooter McGavin (Christopher McDonald). The story follows the well-meaning yet easily angered golfer as he attempts to win back his grandmother’s house, save her from a retirement home, and compete against the arrogant and condescending Shooter McGavin. 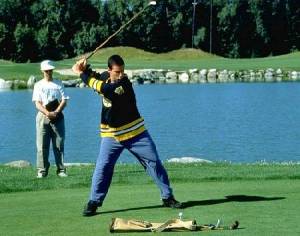 Happy is a Well Meaning Person

One thing that drives me nuts about a lot of Adam Sandler’s recent movies is that a lot of them, the character that he plays is an absolutely horrendous human being who should not be allowed children. It was a similar reaction that I had when I saw Billy Madison and one of the main reasons I do not like that movie. Because I think the concept of a person like Billy Madison is one that you shouldn’t allow around children and should be locked away from society so people don’t have to look at him. I tend to look fondly on Sandler movies whenever he is playing an actual decent human being and this is the case for Happy Gilmore.

Happy may be hot-headed, he may get into fights, and he is by all accounts childish. But Happy is still a very kind and caring individual. He is willing to drop everything he is doing to play a game that he doesn’t even like all to ensure that his grandmother is happy and safe in the house that his grandfather built. Happy is in truth, a good-hearted person and one that you truly want to root for. He has his moments, but that only seems to endear him more in my eyes as a fun personality flaw to a nice person.

Shooter McGavin vs. Happy Gilmore is a Classic Rivalry

Without a doubt one of the most memorable rivalries in all of movies, the conflict between Shooter McGavin and Happy Gilmore is one of the best that I have seen due to the fact that the two characters are the polar opposites of one another. Shooter McGavin is a well-respected member of the golfing community. He is generally liked by fans and players alike. However he is very self-centered, only thinking of himself and what he wants. Somewhat deservingly so considering he worked his whole life towards this goal. But, he is still mean-spirited and hateful towards people that he perceives are littler than him. His demeanor is cold, calculating, and malicious.

Happy Gilmore, as I said before on the other hand is a very well-meaning person. He has a very nasty temper that leads to fights and conflict, but all things considered the guy rarely thinks of himself. He wants to be a hockey player, but is willing to play golf just as a means to get the house that his grandfather built with his bare hands back for his grandmother. Everything he does he does for his grandmother and for the people around him. He is generally nice to his caddys and to the people that he meets unless they disrespect him or the people he loves. He is loud and abrasive when it comes to the golfing community, but is far more endearing and modest compared to the pompous McGavin.

The two are that classic rivalry of two completely different forces colliding into one large climatic ball of conflict and all of this is helped by McDonald and Sandler who are firmly in their comfort zone with their roles. McDonald has the look and voice that sells a pompous jerk while Sandler does a great job playing the well-meaning, yet hopelessly goofy, and easily angered guy just looking to help his family. The fight between these two characters is what makes Happy Gilmore so personal

Can’t Avoid Some of the Old Sandler Teenage Boy Humor

There are a few jokes that seem to fall flat or just seem in poor taste. We can’t get them all right in this scenario. Happy Gilmore is a funny movie, but there are some jokes that tend to fall flat. For instance, the two scenes that involve death are handled very poorly, the first is at the very beginning of the film when we watch Happy’s father get killed by a stray puck at a hockey game. Jesus Christ! We just started and you throw that at us and then wave it off like it is nothing. Damn! Then when Chubbs tragically dies due to some misplaced slapstick, the gravity of this mentor and friend dying is handled with very little tact and obtains very little laughs at that. There are various other smaller jokes here and there that dive into the low brow areas that just don’t seem to work. The things you come to expect from a Sandler movie.

Happy Gilmore is just a fun comedy movie. Adam Sandler is at his best in this sports classic and his fight with Shooter McGavin is one of the best rivalries in movie history. It is fun, light hearted, and you want the Happy character to succeed. Also Bob Barker kicks the living shit out of him. You think I forgot about that? Oh hell no! Bob Barker is the one person that puts Happy Gilmore in his place and it is amazing! This is why Happy Gilmore will always be a favorite of mine.

Thank you for reading and as always if you enjoyed this review, please like and subscribe for more.