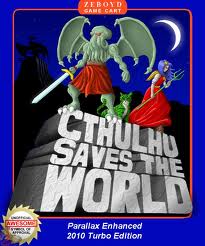 Is it story time with Grandpa Tanner again? I do believe that it is! So if you will allow us to go back to the distant past of the summer of 2014. The Steam Summer Sale was in full swing and I was insanely broke. But not letting this small problem get in the way of the Steam Summer Sale I was still picking up a handful of games at insanely good deals. Just being a slight bit frugal about is all. Well after picking up a few of the titles I wanted on my wishlist, my roommates Shaila and Brandon were quick to point out another game on the Steam Sale that I had never heard of called Cthulhu Saves the World and for the amazing steal of less than a dollar this game could be mine. Well although being hesitant at first I decided to buy the game (which also included Breath of Death VII in a package deal) and my word I was not disappointed in the least bit of what was given to me. A steal is one word to use, but I felt more like I had just robbed a bank with the value that I got for my couple of cents for some good quality gaming. A throwback to classic RPGs as well as some amazing comedy, the 2010 game from Zeboyd has won me over in terms of clever ideas and fun premises.

Cursed by a holy wizard, one day the great and powerful Cthulhu one day awakens from his slumber in R’lyeh to learn that all of his dark and horrible powers are gone. The narrator then explains to us that the only way for Cthulhu to have his demonic powers returned to him is to become a true hero of the people. This however does not go unnoticed by Cthulhu himself who then interrupts the narrator explaining that now that he knows the secret plan, he can use it to become a true hero and save the world so that he can eventually bring about its destruction and doom and will use us, the player as a means of a puppet to control him through this world. Oh yes, this is happening. You then take on the roll of Cthulhu as you travel the world attempting to save it from evil so that you can be the evil to destroy it.

The Throwback to Classic RPGs in Music, Graphics, and Style

This game is one big nostalgia ball for anyone who enjoyed classic RPGs. Just about every aspect of this game is love letter to the old genre. The generic, repetitive, yet undeniably catchy music that plays constantly while you travel from point A to point B, the top down graphics, the party of characters, and just about all points in between screams of an RPG. You get your RPG stereotype characters, healers and warriors, love interests and scholars and it is done in such a way that makes the series fun and challenging. There are random omnipresent Inn’s that randomly spawn and villagers (in towns cheekily named after Lovecraftian towns no less) that only seem to have one function in this world and that is to interact with Cthulhu in some strange way.

I love the fact that this game took a retro style and an old genre and was able to put a new and creative spin on it for the new generation of gamers out there to enjoy. Now granted, most people who play this will be playing it for nostalgic purposes but when younger players play this as well, they will be getting a taste of something they have never seen before and I think it will be something they will like.

This idea was genius. To take an iconic creature like Cthulhu, who is popular enough to almost have his own religion surround him. Which granted his mythos is based on being the Great Old Ones and etc. but I digress. The point is that Cthulhu is almost one of the well known symbols of evil. Their mere presence of him is enough to drive mere mortals insane. He is so large that standing up in an ocean is like standing in knee-deep water to him. This thing is the destroyer of worlds… So let’s make him the hero of our story. Not just the hero of our story, let’s make it a comedy. Let’s give him a love interest in Umi who thinks he is the sexiest dragon, octopus, human that has ever walked the planet. Let’s have him constantly break the fourth wall and talk to the narrator… Because why the hell not?

Easily one of the greatest successes to this game is the fact that they added in that right amount of comedic gold. More games need to do this. I want to see more of Zeboyd games just for this fact alone. To take something that has struck fear in the hearts of many and make it comedic takes skill and they did it perfectly for this game. 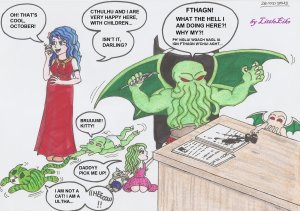 Some of the Jokes Begin to Wear Thin

The only criticism that I have with the game is the same criticism that I would have for any game that seems to fit in any type of self referential type of genre or what I will call the ‘Deadpool Effect.’ The jokes in the game, though start off as hilarious, begin to wear thin after being repeated several times. Initially the concept of Cthulhu, one of the most evil creatures in the known universe, becoming a true hero, having a love interest, and constantly breaking the fourth wall when he is interacting with the world as well as the narrator and us. But after so long you kind of want to just groan after the same joke has been told for the umpteenth time. It does not wear down to the point that you do not want to pick up the game again such as games like Deadpool. But they can still grow very irritating.

Cthulhu Saves the World is a game that everyone should pick up. It is a wonderful value for the price you are paying and hours of gameplay as well as lots of laughs. They can be a little annoying from time to time, but you shouldn’t let that slow you down. It is still an amazing game and one of the best RPGs I have seen in a very long time.