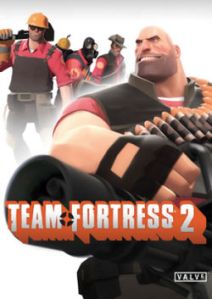 Sorry again for another late post. Hopefully this will be the last as my days in Youngstown are coming to an end. With that being said, it is time to talk about one of the most popular multiplayer and free to play games out there on the market today, Team Fortress 2. Probably one of the most different multiplying experiences out there, Team Fortress 2 brings some of the things that I love best in a video game to the table. It is free, it is fun, it doesn’t take itself too seriously, and it is absolutely addicting. Team Fortress 2 is one of those classic games that will stick with us for generations to come.

While there isn’t much of a plot per see in the game itself (thought it appears in the comic books), Team Fortress 2 is basically a big competitive arena where nine different and unique characters pile into one area and absolutely annihilate each other. One team is the Reliable Excavation and Demolition or RED for short and the second is Builders League United or BLU. Other than that and some really creative trailers… That is pretty much all there is to it… Well that and hats, a WHOLE LOT OF HATS! But beyond that is nothing but explosiony fun.

Before you ever play Team Fortress 2, you absolutely have to watch the promotional material of ‘Meet the Scout’, ‘Meet the Medic’, ‘Meet the Sandvich’. Just watch them, they are absolutely wonderful. They are funny, entertaining, it gives these characters more character and makes you want to select them when you play the game. There is a unique video for each of the character in the game and it adds so much to the content of the actual game that it is almost a necessity to watch before you ever pick up a controller or touch the mouse pad.

A Game That Doesn’t Take Itself Seriously 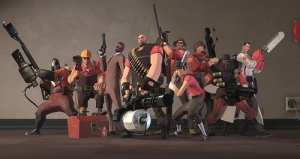 To see where Team Fortress 2 was meant to be and where it actually became is something simply astonishing. The tone was meant to be very serious on the level of Call of Duty and thankfully someone on their creative team had a brain and said ‘Wait a minute… Instead of something serious… Let’s take our original core concept and make it as hammy and cartoonish as possible.’ And that worked perfectly! This game would be nothing if it wasn’t for the fact that it was so cheeky and so light-hearted that you cannot help but have a grand time playing it. The characters are fun, the graphics are cartoony, and the concept of stacks upon stacks of added content that you can buy if you wish is there, but not necessary to enjoy the gameplay.

The best kind of game is one that knows its a game and gives players what they want. Granted, sometimes this can go down the route of Saints Row which is not my cup of tea or you can take what Team Fortress 2 did and make something that could have been generic and made it wonderful.

There is a reason I do not play League of Legends, DOTA, or games such as that. They are not my cup of tea because they are a multiplayer’s only atmosphere. Team Fortress 2 is similar to this in that this game is a multiplayer first style game. But where I give its praise is from the fact that Team Fortress 2 like Left 4 Dead there is a smaller single player. Not big, but enough to give someone like me that little area where I can get comfortable with the game before diving into the multiplayer atmosphere. It is still called a training mode, but it is a fun training mode and something that all multiplayer games need to have! This is an amazing addition and needs to be a true standard of any multiplayer game.

This game is absolutely amazing. It is fun, it is campy, and it is the type of video game that needs to be spread throughout the video game scene. I absolutely love it and need more video games like it. Games that are unapologetically goofy for the sake of entertainment which I feel is tragically lacking in today’s market. Not to mention the game is free to play so please go out and download it, you will not be disappointed in the slightest.