Well this certainly is an interesting game to say the least. It is definitely unique and I can safely say that I have not seen anything like it in recent memory. Toribash may be one of the most simplistic, complicated, and fun free to play experiences that I have ever come across in my years of playing video games.

The concept of Toribash is somewhat difficult to describe. What if an entire fighting game was nothing more than the fighting tutorial? Well with that mental imagery I think you can kind of tell where we are going with this. In each phase, you have two white figures covered in balls and shapes each marked with a part of the body. You click each part giving it directions in which to attack your opponent. One hit is enough to finish off a player, but you have to ensure your opponent hits the ground before you do to win the match. The success of the move is dependent upon the actions you gave your character to do with all parts of their body, making it a very simple idea, but a very complicated process to get what you want just right.

Free to Play and Hours of Fun

Whenever you have a game like Toribash and it is free to play, that in and of itself is room for massive amounts of praise. Any game that has hours of fun and content attached to it and can be played by anyone who wishes to download it is a major triumph. You will spend hours attempting to perfect your moves and come up with the most flawless of combinations, clicking different body parts, ensuring that they flex and extend at just the right moment to devastate your enemy. It isn’t a game that is meant to be picked up and mastered in a few minutes, it takes time, it takes patience, and the reward of watching your little stick figure tear through another stick figure is definitely worth its weight in gold when the final product of your hard labor is on your computer screen in front of you.

For a game that takes such a simple concept as a tutorial package and make it into a game, it did it with flawless precision. There isn’t much to the game. A couple of blocks and circles on a plain white background with some bloody effects for whenever one is defeated. There isn’t much there and if that is the case it better be damn good. Which it is. I will always praise a game for being simple, yet so much fun to play. 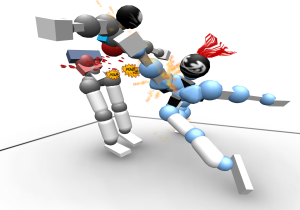 One fault I find in this game is that it is very complicated. More complicated than most games I have seen that are asking for a full $60 buy price. Most things you can kind of figure out on your own, but Toribash takes quite a while to pick up and to master or to just become decent at the game. Moves and how the body works takes some time to figure out and you will fail more times than you will succeed when first starting out. If you are willing to stay in for the long haul it can become very fulfilling… But you are going to have to be willing to put in the time and the effort. It will reward you for it, but it can be a turn off for many gamers.

Toribash to put it simply is the casual game for the hardcore gamer. It is very challenging, takes some time to get the hang of, but the pay off is well worth the wait. It is a simplistic game, but is executed flawlessly. It is currently free to play on Steam and I would recommend that anyone who enjoys a good competitive game to pick it up with your friends and challenge them to a few matches. You won’t be disappointed.

Thank you for reading and if you enjoyed this review then please like and subscribe for more from me! Sorry for the delayed posts as of late as well. My schedule is usually hectic around October and hopefully I will have everything back on track soon. This was a short review but after that this we should be back on the same page and good to go.