Damn it! Fucking damn it! This game! This fucking game! Jesus tap dancing Christ this game is fucking terrifying and for something so simplistic is executed masterfully. How in the hell did this game do it? I have no idea. You take a concept so simple and make it absolutely horrifying… I love it! I absolutely love it! I love every single second of it. Five Nights at Freddy’s needs to be taught in college classes on how to appropriately build suspense and to use jump scares as they are intended to be used. This game is an absolute modern marvel and one of the best damn games that I have played in recent years and I mean that with absolutely no hyperbole. Five Nights at Freddy’s is something that everyone should experience and you can for the low price of $4.99 on Steam!

So in this game you take on the role as a night shift supervisor at Freddy Fazbear’s Pizzeria! Think of it as a sort of Chuck’E Cheese from hell! As the night shift supervisor you are given the task of watching the restaurant at night and make sure nothing bad happens. But as a helpful man named ‘phone guy’ puts it, you are also tasked with watching the animatronics puppets that Freddy’s possesses that are known to ‘roam around the restaurant at night’. He also lets you know that these costumes will not necessarily see you as a person, but instead see you as an endoskeleton without your costume. Because this is against the rules, they will attempt to stuff you into one of the suits. But due to the gears and servos, well it can lead to some discomfort… And death. You luckily have a monitor to track the creatures and make sure you know where they are at all times and doors that you can close when they get to close to the room. However, because this place is so cheap you are constantly running out of battery life and can only use the doors when absolutely necessary for if you run out of battery life, then the power goes out, doors open, and the creatures get you. The idea is to make it through the week without dying and oh boy is that a task in and of itself.

The Game Builds Terror and is an Experience to Behold 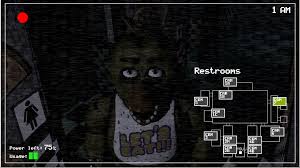 This is how you make a horror game and this is how you execute jump scares. I can’t stand a lot of video games nowadays that call themselves horror games but really all they do is jump out at you and go ‘OOGITY BOOGITY!’ Dead Space is a big culprit of this, masking Call of Duty mechanics in a horror lite game.

But for Five Nights at Freddy’s just like Amnesia: The Dark Descent, the game builds the terror slowly until your heart is going to beat out of your chest. You will feel on edge every second you are playing AND you have no pause button. There is no way to stop the game unless you exit out and start over which is ingenious. There is no escape from the onslaught that is coming your way and the build up of genuine horror combined with the terrifying implications makes the jump scares when the creatures kill you all the more terrifying.

Think about how simplistic this game is. You sit in one spot, you check a monitor, you press two lights, and you close two doors. All things considered you really have only five or so functions in the whole game. Yet it feels so satisfying and it is truly challenging. Its simplicity makes the game absolutely beautiful! This is one of these games that feels more satisfying thing playing most of the bloated Triple A titles in which you practically travel the globe.

I would play this game any day over Dead Island, Dead Rising 3, Watch Dogs, or anything to that effect. It has a feel to it and a personality to it that is addicting and part of it is because you can’t move. You can’t get up from your chair, you can only turn on flickering lights, close doors, and hope and pray to whatever gods that be that you can survive through the end of the night! Excellently executed.

You Will Have Stockholm Syndrome After the Game is Over

I love Foxy. I love Freddy. I love Bonnie and Chica! They are awesome characters and throughout the entire game they are trying to stuff me into a suit and slaughter me! They are so cool and I love the characters. This is by all accounts what Stockholm Syndrome feels like. To be held in terror by your captors for so long that you eventually begin to feel feelings of affection towards them. Truly a very odd experience.

What do you get for surviving all the way to Night 5? $120.00 in the form of your weekly paycheck… Yep that is it. You get paid $120.00… And boy never in my life has $120.00 felt so good. You look at that $120.00 screen and you rejoice. You celebrate that you made it through and you get paid $120.00 for not dying in five days. It is so simplistic. But it is worth every single second of the game to see that I am a valued employee with the company.

Five Nights at Freddy’s is a classic. It is an amazing video game. It is simplistic in its design but builds suspense and terror so well that it keeps players coming back for more each time. It is extremely challenging but the reward is well worth the time and effort that you put into it. It is easily one of the best horror games to come out in recent memory.

Thank you for reading and as always if you enjoyed this review then please like and subscribe for more from me. Come back Sunday for another review from me.