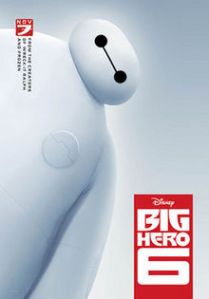 It is good to see that Marvel Studios is not limiting itself to the big Hollywood blockbusters. Oh no, they continue to expand their glorious empire into the realms of Disney animation for a one two combo that is sure to take everyone by storm. Their recent creation to grace the screen is a lovely little gem of a movie known as Big Hero 6. A relatively obscure comic book, Big Hero 6 hits the big screen at the start of the Christmas/Oscar season with strong force bringing an expected but feel good movie that will be sure to warm anyone’s heart in these freezing conditions. I do not believe that Big Hero 6 will be a memorable Disney/Marvel Studios movie that will live on forever as a timeless classic. But it most certainly is a fantastic movie that is a must see this season.

In the not so distant future in the merged city of San Fransokyo, Hiro Hamada (Ryan Potter) is a young man who has gotten into the underground world of robot fighting. After being saved from another combatant by his brother Tadashi (Daniel Henney) and subsequently arrested, Tadashi shows Hiro the university that he attends and his slew of colorful and fun nerd friends. Hiro realizing his life’s ambition decides he wants to attend the university and enters a science fair where he creates minibots that can be operated telepathically. However disaster strikes when the building catches on fire and Tadashi is killed while attempting to save his teacher Robert Callaghan (James Cromwell). Later while mourning his brother, Hiro meets his brother’s project, a healthcare bot named Baymax (Scott Adsit). Together with the lovable Baymax, the two discover that Hiro’s bots were not destroyed in the fire and were in fact stolen by an evil man in a kabuki mask for unknown reasons. Hiro, Baymax, and Tadashi’s friends from the University join together to stop this evil foe.

Jesus christ, we have a superhero team made up of a bunch of techy nerds that it makes me so happy. All of these characters feel relatable in my mind. I know a person who could fit the bill for just about any of Big Hero 6. Everyone has that neurotic friend, an eccentric friend, a an athletic nerd, and the guy who just isn’t that smart but you keep him around because he is kind of funny.

There is a little bit of someone in each of these characters which gives the movie a big plus.

Obviously the biggest draw of this entire movie. Baymax is that perfect side kick with the right mix of comedy to keep things light hearted, but also helpful, and not overbearingly annoying. Add this personality with a body that makes him look like the Stay Puff Marshmellow Man’s chill cousin and you have one of the sweetest, most non threatening robots that you can only hope to imagine.

If there is anything that anyone takes away from this movie, it is the fact that Baymax is such a likable character that I need to see more movies just to see more of this marshmellow robot. 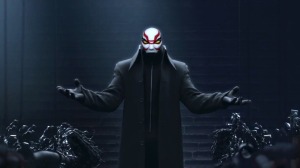 Dead parents, a dead sibling as a means of motivation, a handful of likable heroes, and also a whole lot of diversity as to not appear racist… Yep this is definitely a Disney Movie. I suppose I cannot fault this movie too much. It is a Disney/Marvel movie. It isn’t meant to try anything new, edgy, or outside the box. It is meant to be a good movie for people to consume and move on to their next distraction on their way to the grave, I get it, I’m hip… No I’m not. But when you have a movie that sticks too close to the formula after so many reuses… Well that is where we come into the problems.

There is just too much over used tropes that it is impossible for me not to point it out. We even have dead parents! Dead fucking parents! Man does Disney love those orphans. Poor Hiro has quite the tragic backstory losing his entire damn family, jeez the kid has to feel like he is cursed. But still this movie is just too close to the Disney Formula for me to give a pass to.

Big Hero 6 is a must see movie for anyone who is looking for that Disney/Marvel fix this holiday season. It  does not patronize the audience and has a serious yet fun plot. There is definitely enough in there for both adults and children to thoroughly enjoy. It is a simple feel good Disney movie that delivers on all the right feels.