You know, at first I was not going to make a best and worst video games list of 2014. As I stated earlier in the year, the concept of buying/renting video games had become an expensive adventure and I wanted to focus more on movies instead of video games for my site. But then I realized as I was looking over all my reviews of 2014 that I did in fact have a good enough portion of video games that I reviewed to make a decent list out of them and said, oh hell why not?

Looking back at 2014 when it comes to video games is like going to a strip club on a Tuesday. Ugliness and desperation as far as the eye can see, all of which are hoping you too are desperate enough to give them money for what is by all accounts sub par entertainment. The vast majority of video games released by the big dogs have not necessarily been bad as they have been ‘mediocre’ and ‘safe’. Which is depressing when you realize that the industry needs a swift kick in the balls that none of the games are willing to do. But there have been a couple of gems to come out and today we are going to highlight the ones that rule the shit house roost and the few that were able to crawl out of the cesspool of filth that is the video game industry of 2014.

Dishonorable Mention: The Evil Within

My most recent review. While there is still enough to this game to give it some merit, The Evil Within just does not have the depth, scares, and relies too much on cliches to be anything worth playing. It is actually a perfect representative of the game industry as it stands today, not horrendous… But not worth your time and money. It may not be as bad as the top three, but believe me when I say that you will have more fun playing Resident Evil 4 than The Evil Within.

Earlier in the year, a good friend of mine gave me a key to play a beta of ESO and it was my hope that this would be the one game that could break the MMO mold. I never liked them but if there was any game that could change my mind it is the Elder Scrolls Series.

But instead of getting Morrowind, Oblivion, and Skyrim on the MMORPG platform… What we got was nothing more than a shitty World of Warcraft clone with some Elder Scrolls flavor mixed in with it. It took what could have reinvented the genre and made it nothing more than a dime a dozen MMO. This more than anything makes it inexcusable in this critics opinion. Poor concept, poor design, and abysmal execution make it one of the biggest disappointments in several years and one of the worst games of 2014.

Everything about this game is wrong and I knew it from the moment that I got the chance to play it. This is nothing more than abject failure on a screen. I never got a chance to play the original Thief series, but from what I hear it was a rather unique and fun experience. It certainly is not what this game claims to be which is a generic and horrific reboot of the series that does nothing but piss on anything that could possibly be original and enjoyable.

The graphics are shit, the gameplay is boring, the characters are generic stock video game turd blossoms, and hell while were at it just about everything that is featured in this game is generic tripe. This game would be the worst I played this year if it wasn’t for the one big steaming pile of crap that we find at number 1. 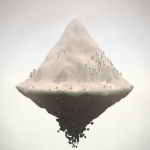 Fuck this thing! FUCK IT! THIS SHOULD NOT EXIST! I feel dirty putting it as the Worst Video Game of 2014 because this insinuates that it is a game. This is not a game, this is animated pretentious trash that is made by a person who thinks they are smarter than everyone else and will put out a ‘real game’. Mountain is a game that laughs in the face of gamers for enjoying games. It has the balls to announce its hours of gameplay, stunning graphics, and bullshit on top of bullshit meant to insult people who take pleasure out of playing video games.

It does not have the addictive attribute that Civilization V possesses, but Civilization Beyond Earth is still a solid game with a solid concept. You can still lose yourself in hours of gameplay and discovering new and exciting aspects of this bold new world that you have been sent to colonize. Not a top 3, but definitely a solid game worthy of your time. Next time it is on sale on Steam I suggest everyone pick it up.

3. South Park the Stick of Truth

This game is easily the best movie/television show tie in that I have ever played (TellTale’s Walking Dead doesn’t count because it is an adaptation of the comic book not the TV Show). South Park the Stick of Truth has that classic RPG feel that I have been missing in my video games for several years. Matt Stone and Trey Parker showed that they truly understood the source material of classic RPGs and was able to incorporate the South Park experience into it while giving excellent parody to the genre. It was an attention to detail that truly lead to its success and is one of the best RPGs I have played in years.

The game gives you the feeling of being apart of the South Park Universe. You feel like you are apart of the show and get to interact with the town which is something that fans of the show have been hoping for for years now. Overall, excellent execution and one of the best games I got the chance to play this year.

While barely being edged out of the number one spot by what needs to be the future of video gaming (more on that later), Dragon Age Inquisition is the one game that has been released by Triple A developers that gives me one shred of hope for the future of the industry. While every single Triple A game released on the XBone or the Pisspoor let out a loud and resounding ‘meh’ of video gaming apathy and depression; Dragon Age Inquisition walked into the room and I rejoiced like a giddy school girl.

This is a game that gave us good graphics, a good story, excellent open world adventuring, and a story line that is nothing short of gold. Believe me when I say that I will take 1 Dragon Age Inquisition out of 1000 Watch Dogs, Destiny, Titanfall, and all points in between.

I struggled to decided which of the Five Nights at Freddy’s games I would put on this list as between the two they collectively made me as a 25 year old man crawl under my bed and start crying for my mommy to make the evil demented teddy bear go away. But at the end of the day, I made the decision that I just needed to go ahead and stick both on the top spot of 2014 in a tie and call it a night.

Both games are stellar within their own right and the second game instead of giving us the same thing only in a new and shinier package, reinvents itself. It amps up the difficulty to levels I have not seen in years and did not think I would see again in a video gaming age where they hold your hand and lead you through the levels like you are a third grader on a field trip.

Let it be known that Five Nights at Freddy’s NEEDS to be the future of video gaming. It is a simple concept, executed perfectly, it brings more scares and terror than any Triple A game could ever hope to achieve, it is a great value, and it keeps the players demanding more from the series. By all accounts Five Nights at Freddy’s 1 and 2 are some of the best video games that I have played in years and are the clear winners of Tanner Reviews’ Best Video Game of 2014.

Thank you for reading and as always if you enjoyed this review then please like and subscribe for more. We still have a few more reviews to get through before the best and worst movies of 2014 so we can look forward to those coming up very soon.