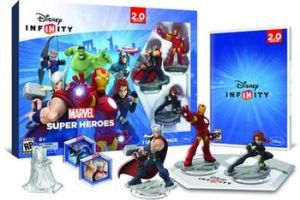 Thanks again to my wonderful girlfriend Kitty who is the proud owner of an X-Box One to allow me to play some of the games that she has bought over the year. My last trek has left me with a strong impression of today’s subject, Disney Infinity: Marvel Superheroes. An action and adventure sandbox game, this interesting look into the future of gaming includes little figurines that you place on a port to play as the given character or use a certain level. After giving the game a little go, I have to say that it was quite a rewarding experience and one I had a great deal of fun playing.

Disney Infinity: Marvel Superheroes doesn’t have a lot of a plot per say as much as it has an open sandbox world with several quests along the way to give a try. You get to play as some of your favorite Marvel and Disney characters dependent upon which of the figurines you have at your disposal. You adventure around the city and enjoy life as a superhero, saving lives, or just fucking with people. The choice is really up to you.

Now I was only able to play the Avengers version of the game. But from the time spent playing it, I was quick to comment how the game is basically Grand Theft Auto but for kids. There are quests labeled on your map that you can queue into whenever you can be tasked to do so, but for the most part all you are doing is going around town and causing hell. You fight a couple of random spawned Ice Giants and the like but the most fun I had in the game was picking up random people and spiking them onto the ground, to which they just stand up and say ‘Well that was rude’ and carry on their day like nothing happened.

You can pick up people, cars, and just about everything else around town. You can cause as much havoc as you like as a ‘superhero’ and with the exception of cars that just break apart and disappear and people who get up after being powerslammed by a norse god and say ‘Well that just ruined my walk to work’. But the beauty of it is there really is no ramifications. It is just non stop action packed fun.

Plenty of Characters and Games to Choose From

If you were to collect all of the figurines (more on that later) you have 27 different characters to choose from in the Marvel and Disney heroes and villains. These characters range from the Guardians of the Galaxy, to the Avengers, to Disney’s Merida from Brave and all points in between.

It is really cool to be able to ‘play your way’ and with your favorite Marvel or Disney character. Mix and match, have fun, all this is your game to play.

I do dislike that it seems that the missions are somewhat of an after thought to the sandbox world. It seems that your missions are simply, go to place X, talk to character X, do the same quest with a little tweek from the previous quest, move on to screwing everyone’s day on the street.

It just would have been nice to have some more interesting missions. Engross us in the story a little bit more and this game would in fact BE ON PAR with games like Grand Theft Auto for their fun gameplay and amazing story. But without the latter, the game only comes across as very good, not outstanding.

The Game is More Focused on Collectibles than Gameplay

Let me put this in perspective for you. Besides the initial cost of the game, it will cost you $15-$30 for each additional character to purchase after your initial factor. If you truly wish to collect every single collectible figurine to play in this game and assuming that each figure is only $15 dollars a piece, you will be spending close to $460.00 on this game! Just let that sink in for a moment.

Now granted if you only want to get your favorites and play as them, then you can severely curve this price. But if you are a person who just needs to collect them all, then you will end up spending the equivalent price of a next gen console and then some on one video game. Let that sink in and think before you just buy this game if you are willing to shell out that much money for Disney Infinity.

Overall Disney Infinity is a good buy. It is a game that will stick around for some time and milk a little bit of money out of you with each purchase. It is geared more towards kids and it is kids who will get a lot of enjoyment out of it. But it is a game that people of all ages can play and get copious amounts of enjoyment out of. The game is a true sandbox game and you can enjoy hours of fun, definitely worth the purchase.