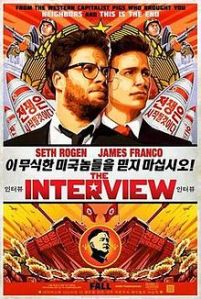 Boy did this movie cause a stir. Oh yes, today we look at the movie that spurred some pretty intense hatred from the hermit nation-state in the east, The Interview. Hard to believe that a James Franco/Seth Rogen production could generate so much heat. But I suppose when a dictator like Kim Jong Un gets a hold of it and threatens serious retaliation if the video were to be shown, then that is enough to stir some kind of debate. This movie was the talk of sensational news outlets for weeks as each one of them took shots at Sony’s decision to pull the movie from theaters, which also lead to a cyber attack reportedly carried out by the North Korean government.

The Bald Eagle of America was waving that flag high and mighty in patriotism as the film was proudly shown to the world on YouTube, various other screenings these past couple of weeks, and I finally got to watch the movie. After giving it a watch, I have to say that North Korea raising such a stink about the film is most likely the best thing that could have ever happened to it. You can smell the irony as the film’s bland comedy wafts through the air and was sure to be nothing more than another dime a dozen comedy if it wasn’t for the dictators actions which lead to the movie being heralded as the patriotic film of the year. This is quite a feat considering American Sniper is still being shown in theaters.

Don’t get me wrong, I’m up for some good old patriotism as much as the next guy, but after watching the film I was not satisfied from a movie that brought only a few laughs and enough of a plot to make me say… Eh it is on par with Balls of Fury and Police Academy 4: Citizens on Patrol.

In this interesting little comedy, our protagonists are David Skylark (James Franco) and Aaron Rapoport (Seth Rogen). David is the host of a smutty entertainment first style talk show called Skylark Tonight where he interviews various celebrities for juicy gossip with Aaron as his director. When it is learned that North Korea leader Kim Jong Un (Randall Park) is a big fan of Skylark Tonight, the duo are invited to North Korea to film a special edition of Skylark Tonight with Kim Jong Un as the guest host. However just as they are about to depart, they are visited by the secret service Agent Lacey (Lizzy Caplan) who asks them to help assassinate the dictator. The pair travel to North Korea to interview and kill the Kim Jong Un where, of course, hilarity ensues. 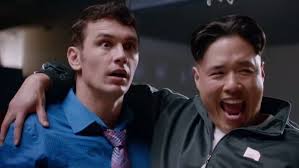 Good Chemistry Between the Cast

You can’t deny when actors have good chemistry. You can fill it throughout the film. It is easy to see that the cast meshes very well on-screen as most of the scenes feel rather seamless. Franco and Rogen do not need to be tackled to any large extent. The duo are friends, they have worked great in the past, and they work great in this movie as well. Rogen’s chemistry with Diana Bang’s Sook Yung Park feels like an organic relationship that could have been written off as ‘insert generic romance here’ in lesser hands.

But the true winner has to go to James Franco and Randall Park who knock it out of the park as David Skylark and Kim Jong Un. Some of the best comedy in the film comes from the scenes of Franco and Park interacting together and feeding off of each others energy. Not to mention props to Park who is able to bring more to the Kim Jong Un character besides the generic stereotype comedy that I was expecting. Props all around to the entire cast.

Has the Seth Rogen/Evan Goldberg Charm

Seth Rogen and his writing partner Evan Goldberg have been able to create some pretty solid stuff. 50/50, Knocked Up, Pineapple Express, and This is the End are just a few examples of the talent in writing and directing from these guys. Each of the films has a unique tone and feel to it that lets you as the viewer know that you are watching a Seth Rogen/Evan Goldberg movie. Typically speaking it is a strong blend of situational comedy mixed in with a serious subject matter such as unplanned pregnancy, cancer, or the rapture.

This film like the others has an identity to it, the Rogen/Goldberg stamp that has brought them great success. The film leans heavily towards the comedic side of things but is able to bring to light some of the problems in North Korea such as famine, death, and the real human problems that face a leader like Kim Jong Un. It is a sign of great writing and thoroughly enjoyable in that regard. 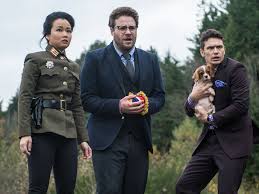 The Sad fact is unlike some of Rogen and Goldberg’s other movies like This is the End where I was laughing from start to finish, this film left me with very few laughs in a movie that was supposed to be dominated by comedy. The concept of honey-potting and the alternative of honey-dicking was not funny when it was first introduced and the joke is beaten into your skull throughout the entire movie. Apparently by the standards of this film, there is no such thing as an organic relationship only who can exploit the others with cutsie terms like honeypotting/dicking to justify it.

The David Skylard character instead of his intended hysterics, can become unbearably annoying at times. I can get behind an eccentric and dimwitted Hollywood celebrity being forced into a situation like this as comedic, but the man’s stupidity and mannerisms become so unbearable that I just want to fast forward through most of his scenes.

There is some more low brow humor inter dispersed through the film that only rendered a chuckle out of me at best which lead to the film being a major disappointment from two guys who I have found to be some of the funniest actors in the film industry today.

As I said in the opening, the only reason The Interview became such a big talking point is the reaction of the actual North Korean government who launched cyber attacks on Sony and threatened action if the film was shown. Without this unwarranted political response, The Interview would have quickly fallen into relative obscurity.

When it comes to the Seth Rogen oeuvre, The Interview is definitely in the negative category somewhere just above The Green Hornet and The Guilt Trip. I laugh at the fact that if Kim Jong Un and the North Korean government had just been patient they would not have stirred the Bald Eagle Patriotism of the American people and turned the film into a much more well received hit.

The Interview is okay. It isn’t great, but it is okay. The film benefits from a cast that is comfortable together and decent writing from Rogen and Goldberg. However most of the jokes do fall flat on their face and was not the laugh out loud comedy I was expecting going into the movie. Franco’s character is borderline unwatchable when he is at his worst and overall, beyond the political stir, I can’t find this movie having any sort of longevity beyond that.