So it comes to an end. Five Nights at Freddy’s may very well be one of the most intelligent and terrifying horror games to be released in the past twenty years. It took the video gaming community and YouTube personalities by storm with its intelligent build up and excellent use of jump scares. Combine these with the fact that it tells an engaging and immersing story through Atari style graphics and very little budget and we have one of the masterpieces of the 2010’s.

Considering FNaF won my award for Best Video Game of 2014, I will be the critic that will champion the series while contentious opinions tend to spring up over the past year. But all good things must come to an end so today we will look at Scott Cawthon’s homage to pants shitting jump scares, Five Nights at Freddy’s 3.

Set 30 years after the events of the first game, you take on the role of the newly hired security guard at Fazbear’s Fright, a horror ride that is based on the events that occured at Freddy Fazbear’s Pizza. As the night time security guard it is your job to look over the ventilation system, audio system, and camera system and reboot them when they start to fail. After night one, the people who own the theme ride find an old animatronic that they nicknamed Springtrap which will begin to hunt the player throughout the night. Your job is to watch over the theme ride and keep yourself from being killed by the nefarious Springtrap.

In addition to the overall plot, the game will deviate with various Atari graphic mini games that symbolize the Purple Man (or villain of the series) dismantling the animatronics from the original games as well as other mini games meant to represent the souls of the children the purple man killed being set free from their animatronic prison.

Complication in a game known for its simplicity can either be a great or a terrible thing. On the one hand you surprise the player with the increased level of difficulty that adds to the intense and frantic nature of the game. On the other hand you could be blasted for eliminating what made the game unique in the first place. In the case of Five Nights at Freddy’s 3, it falls into the former of the two options. With the addition of a camera system as well as operating the ventilation, camera, and audio, the first night while not having any risk can feel horrifically stressful as you have no idea what you are doing.

The confusion compliments the game and creates horror when there is no horror to be had. Then with the addition of Springtrap brings the game to the level of competition that we have come to expect from Five Nights at Freddy’s.

It is a True Conclusion

This franchise could have been milked for all it was worth and if it were a Triple A Title we would right now be playing a stylized ultra polished turd called Five Nights at Freddy’s: Purple Guy’s Revenge or something to that effect. Scott Cawthorn was smart and had an artistic mind for this project. He told the story of a serial killer dubbed purple guy who killed children and got his comeuppance from the spirits of said dead children.

There is no need for any further video games that feature Five Nights at Freddy’s. The story has been told and it was told well. The game has a strong following and people are now waiting on bated breath for what Scott Cawthon will give us next. The fans don’t want another FNaF game, they want more from the creator and are satisfied with the story. This is truly how you create and end a franchise. Instead of milking it to the point of apathy, you have a satisfying conclusion that can be remembered and generate income for years to come. 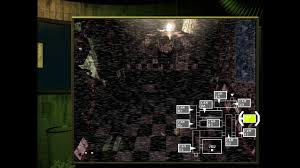 Some of the Bite is Gone

There is the confusion with the new system of the game as well as the pure terror that is the Springtrap animatronic, but considering the fact that there is only one real animatronic, with various hallucination thrown in, and more of a focus on the story built around the dead children and purple guy, the game truly has lost a little of the bite that the first and second game had.

There just isn’t enough terror, the jump scare from Springtrap is more annoying than terrifying, and the only real terror comes from the hallucination that don’t end your game. The game does focus on the mythos than the scares in this one, yes. But I do think causing the gameplay to suffer in order to tell more story is not the way to go. Due to this I would have to call Five Nights at Freddy’s 3 as the weak link of the series.

Overall, Five Nights at Freddy’s 3 is excellent. It is a good conclusion to the series and Cawthon allowed us to piece together the story ourselves with a thrilling and intriguing finish. It may be the weakest of the three games, but considering you have such prestigious company, this is not in any way a bad thing. It is a must play to anyone of the series and for those who have yet to play the games, I say pick up 1, 2, and 3. You will not be disappointed.

Thank you for reading and as always if you enjoyed this review then please like and subscribe for more from me. Come back Thursday for a new review and Saturday for a new episode of The Nerdiest Talk Show on Earth.