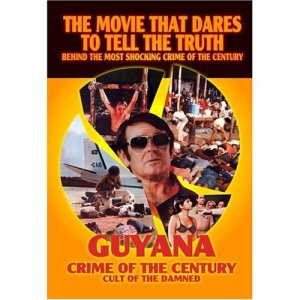 Happy Easter everyone! I for one cannot think of a better way to start this day then beginning Exploitation April… Actually I could think of a lot of better things that I could be doing then watching exploitation cinema. I could go for a walk in the park, finish my papers that are due at the end of the month, or just sit here and watch a good movie instead of the garbage that is Guyana: Cult of the Damned. I sure know how to pick them. My first step into the realms of exploitation cinema is a movie that means to exploit the tragedies of hundreds of people being killed by a sadistic tyrant combined with cyanide laced Kool-Aid and the victims of a mass shooting at an airfield. Granted this is just the tip of the iceberg when it comes to Exploitation movies, but you will be hard pressed to find something in the genre as sleazy as exploiting the deaths of real people.

For those of you who are not aware, The People’s Temple was a religious cult centered around a fanatical leader named Jim Jones. During the late 70’s Jones lead his congregation to a religious compound in Guyana that he named Jonestown. Once there, Jones became a sadistic tyrant and forbid anyone from leaving Guyana. When Congressman Leo Ryan made a trip to Jonestown to inspect the compound and rescue some of the people in Jonestown, there was a mass shooting at the airfield, killing Ryan and various others while at the compound, Jones instructed his followers to commit suicide via cyanide laced “Flavor Aid” (a Kool Aid offbrand). Hundreds of thousands of people died in the process. It was one of the worst tragedies to befall the American people and one of the worst mass suicides in the history of the Earth.

In comes Rene Cardona Jr. who only a mere year and some change after the tragedies, penned, produced, and directed Guyana: Cult of the Damned (or Crime of the Century) a movie that gave us a shot for shot retelling of the Jonestown massacre in the sleaziest way that one can imagine. Thus this real life tragedy exploitation movie came lurching out into the public’s eye. So let’s get Exploitation April started with a bang and look at this… interesting movie.

It is an Accurate Portrayal 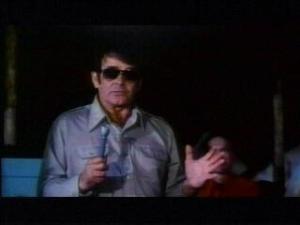 Say what you will about the sleazy vibe you get while watching the movie, it is a painfully accurate portrayal of the events that occurred in Jonestown and the massacre itself. Hell if I was curious as to what happened beyond watching documentaries, I would watch Guyana: Cult of the Damned just because it will give you the most accurate representation right down to people moaning, begging for their lives, babies being fed the Kool Aid, and the massacre at the air strip. It is a very raw film and definitely not for the faint of heart. But if you are one of those people who is fascinated by death and once a recreating of one of the deadliest non war events that occurred in history… Look no further than some Rene Cardona Jr sleaze.

Also, I should add that the man who plays ‘Reverend James Johnson’ is a talented actor. The man behind the role, Stuart Whitman of The Longest Day and Eaten Alive does bring the character of Jim Jones to life with terrifying realism to the point that I could barely tell the difference between the two. He does an excellent job in a movie that he really shouldn’t have tried too hard.

Film Quality is Bad and Camera Angles are Horrible

What more can you say other than the fact that this movie is just terribly made. Even for 1979, the film quality is terrible and the audio almost makes the movie feel terribly dubbed. Camera angles tend to hold on shots from far distances and the lighting makes several scenes hard to see. Overall this movie is just poorly made on a technical level.

So when you change the names of people from tragic events in a movie, this does make sense in order to protect certain people from having their names tarnished or associated with the event. But when you change the names from Jim Jones to James Johnson and Leo Ryan to Lee O’Brian then this comes across not only as tasteless, but unintentionally funny.

I can’t take this movie at all seriously whenever they are referring to everything as Johnsontown and James Johnson. The guy’s name is Jim Jones and he is responsible for the death of the entire cult. I don’t mind if you sully his name. There is no need for these name changes and they just come across as stupid. 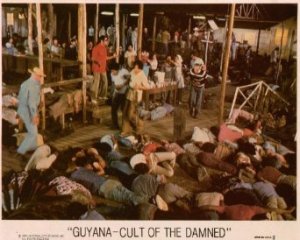 It is Meant Solely to Capitalize on the Jonestown Tragedy

Exploitation can be rather sleazy, that is just the nature of the game and I personally love some good sleaze every now and again in my movie. But when the sleaze is coming from the fact that you are exploiting a tragedy to sell a knock off cult suicide movie, then you have hit a point of sleaze that will just make your stomach churn.

Unlike other movies that tackle tragedies like Foxcatcher and United 93 that at least bring some character and gravitas to a horrific event that happened in history, Guyana: Cult of the Damned has no characters or builds up any sort of narrative. It is merely a sensationalized film meant to show people reenactments of the Jonestown Massacre. A movie that would follow the life of Congressman Leo Ryan or one of the survivors of the Jonestown Massacre would be somewhat thought provoking and could shed light onto the subject that news outlets simply could not. Even a movie that features Jim Jones’ descent into madness like Powers Boothe’s Guyana Tragedy: The Story of Jim Jones can bring to life a sadistic tyrant in a tactful way.

But when you have a movie that just features Jim Jones being sadistic and evil from beginning to end and only show scenes of Jones reacting to various atrocities in full exploitation fashion, it comes across not only as sleazy but a horrible movie as well.

This movie is terrible. Yes, it is a somewhat accurate interpretation of Jonestown and Stuart Whitman is decent in his role. But when you make a movie with no characters, horrible production, and a premise that is merely meant to showcase the violence without any weight behind it, your result is a sleazy and tasteless mess of a movie.

Guyana: Cult of the Damned will only be remembered by a select few who dip deep into the exploitation genre or become morbidly curious about the Jonestown massacres and for good reason to boot.

Thank you for reading and as always if you enjoyed this review then please like and subscribe for more. Come back Tuesday and Thursday for new reviews as well as this Saturday for a new episode of The Nerdiest Talk Show on Earth.

2 thoughts on “Exploitation April: Guyana: Cult of the Damned”