So with the end of the 2015 HvZ:Athens Spring Invitational, I am currently in the come down phase of the adrenaline rush and my body and mind are absolutely dead. With that being said, I just do not have the energy to sit through another exploitation movie to review, so I am going to do an easy list featuring professional wrestling once again. Surprisingly enough, the WCW World Championship was one of the easiest to list.

Out of all the wrestlers who held the belt, almost all of them either fit into the excellent category and the rest fit into the horrific piles of dog shit category. After putting them into their two categories, it was just a matter of finding a place for them. The WCW Championship was a belt that found itself either in the hands of someone who dragged its prestige to the depths of the abyss, while at the same time having the next wrestler bring it back up to its former glory. So with that being said, we are going to look at the Top 5 Best and Worst WCW Champions of all time!

Probably one of the best wrestlers on this list, Jeff Jarrett is one of those controversial figures in pro wrestling. Some see him as an underrated wrestler who was undervalued by WWE, didn’t realize his potential in WCW, and finally made his home in TNA before moving on to Global Force Wrestling and so forth. Other however see him as a greatly overrated sleazeball who held WWE for ransom before leaving for WCW and fiercely lobbied to be in the main even picture due to his own ego running wild.

Regardless, Jeff Jarrett’s four WCW title reigns that occured in the 2000’s can be chalked up to poor booking, poor planning, and terrible matches. This also includes the infamous ‘laying down for Hulk Hogan’ at Bash at the Beach. No matter what you think of him, Double J Jeff Jarrett deserves to be on this list.

I know some of you are calling foul on this, but please hear me out. The reason Vince Russo sits at number 4 instead of number 2 on this list is because of two reasons. The first reason is that the two wrestlers who are going to be featured prominent at 3 and 2 did the most damage to the WCW and were major parts to its destruction and second reason is because by the time his title reign came around, WCW was two steps away from going from sinking to sunk and Vince dropped the title due to the fact that he wasn’t a wrestler instead of having it removed from him in a match.

That being said, this is just one of the many things that Vince Russo did to not only shoot WCW in the foot during its dying days, but also amputated the entire leg at the hip. Mixed in with a slew of pole matches, oddball booking, the Hulk Hogan Bash at the Beach fiasco, and the championship that we will find at the top of this list, the fact that Vince Russo held the WCW Championship is just another reason why the promotion ended up in the tank.

Kevin Nash owes his entire legacy as a professional wrestler to being one of the greatest politicians in the entirety of professional wrestling. Not only was he a member of the Kliq, but he was able to organize and book matches in such a way that always had him and his contingent of friends on the top. The nWo has him, Hall, and Hogan to thank for completely changing the game in professional wrestling, but as for Nash himself… He was a subpar wrestler. He was big, but like most big men in wrestling he was slow, plodding, and just all around boring.

Nash held the WCW Championship three times and out of those three times, one lasted one day, the second ended due to a convoluted Tag Team match featuring Randy Savage, and of course the finale was the infamous Fingerpoke of Doom that spelled the end of WCW. The day that Kevin Nash not only ended Goldberg’s undefeated streak, robbing WCW of one of their biggest attraction. But he also lost it by laying down for Hollywood Hogan, bringing back the now tired nWo, and changing the tide in the Monday Night Wars for good and killing WCW once and for all. 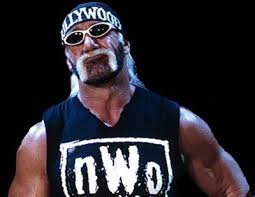 Of all the wrestlers who ruined WCW, none are more prevalent than one of the most charismatic wrestlers in the history of pro wrestling, Hollywood Hulk Hogan. After he was signed away from WWE, Hollywood Hogan unleashed a reign of terror and back stage politics the likes of which will never be seen again. Due to his ego and command over the main event scene, he and the other veteran wrestlers held down young and up and coming talent and kept the main event picture a strict club of old guys plodding around the ring.

Hogan out of all of these people was the worst offender. Hogan was a 6 time champion, held the title for 1,177 days all together, and during this time was well past his prime to put on any sort of semi-stellar match ups. Hulk Hogan may have made wrestling a house hold product in the 80’s, but in the 90’s he was instrumental in eliminating one of the strongest promotions in the USA. His spot only remains at number 2 due to one worse person who spelled the end of the WCW as we know it.

I know that this is not as much of beating a dead horse as it is beating the quivering piles of muscle and pulp that was the horse, but I tried to think of a reason to justify putting Hogan over Arquette and it just simply wouldn’t work. Yes, David Arquette didn’t want the belt put around him. Yes, Arquette shouldn’t be blamed for what was a big publicity stunt. But man, there were so many things that spelled the end of WCW, the Finger Poke of Doom, the Vince Russo shoot on Hogan, Vince Russo period, the financial issues, and so on and so forth. But if you point to the part signaled that there was no way back, it was giving Arquette the World Championship.

Arquette played the role to the best of his abilities and took it all in stride. But all things considered Arquette just happened to be the face of ‘really?!’ His title reign is just odd and it left a bad taste in the mouths of WCW faithful who were hoping that they could come back from the slump they were in. This moment more than any other is where the WCW lost all hope at a revival.

Diamond Dallas Page could very well be the inspirational story of professional wrestling. The entire man’s career is the story of the little guy becoming a giant. DDP started wrestling late in life and was a product of the WCW. One of the WCW’s top guys, DDP was well seasoned by the time he reached the top of the mountain. Due to the fact that the main event scene was made up primarily of WWE guys who jumped ship, DDP was a welcome addition to the scene. He was innovative and an excellent worker.

DDP held the WCW Championship on three occasions and while most of them were not very memorable, they were still a welcome change of pace to Hogan holding it for the umpteenth time.

That big ole stinky grizzly bear of a man himself, Big Van Vader was one of the few exceptions of a big guy wrestler who was not only larger than life, but agile, and vicious in the ring. Real name Leon White, Big Van Vader was a staple of WCW during its early days having memorable feuds with Sting and Ric Flair.

Vader may have obtained more fame in Japan, but his WCW days was nothing short of memorable affairs. He was a larger than life guy and it was justifiable to put the strap on him to build the prestige of the belt.

Another product of WCW, Booker T is one of the greatest performers to come out of WCW and in recent history. The man had a presence and a look that he made his own and in the WCW’s dying days, Booker T was the one wrestler who was able to pull it out of the shithole and give us some compelling wrestling. One half of the Harlem Heat with his brother Stevie Ray, Booker T had been a staple of WCW since its early days.

Booker T held the title 5 times and trust me he made sure that you knew this fact and is only second in days held to Hogan Flair, and Vader. That is an impressive lineage.

Say what you will about Goldberg, he was a sloppy wrestler, he didn’t much care about the business, and he had an attitude built up by the publicity. The man still commanded a presence and was one of the few things that was keeping WCW afloat when it was on its downward spiral. People would tune in to watch Goldberg conquer someone else in a squash match as well as keep counting on his number of victims.

Goldberg won the championship only once, but did so in memorable fashion against Hollywood Hogan in his hometown of Atlanta. He would hold the title for 174 days before losing the title to a taser and Kevin Nash at Starrcade which would then lead to the afforementioned finger poke of doom. After taking his first loss, Goldberg’s career never recovered and he has since faded into obscurity.

Could it be any other? He may not have held the title the longest or had the most title reigns, but when people think of WCW, they think of two things nWo and the Icon Sting. Steve Borden was a staple of WCW wrestling and the one wrestler who would stand up for the WCW against the nWo. The man had a presence to him and a look that was all his own. He was larger than life and whether he was wearing the surfer look or the Crow fetishist look, he was a force to be reckoned with for WCW wrestlers everywhere.

Sting held the title 6 times before the company went under and went on to have a decent run in TNA before signing up with WWE this year, mainly for merchandise rights, and the mystique but a welcome addition none the less.