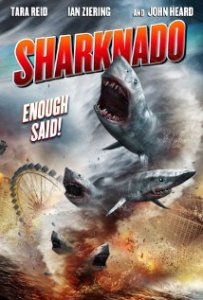 For anyone among us who grew up in the past decade, the SciFi channel original movie and movies from the production company The Asylum are fresh in all of our minds. Oh the days when I was a young teenager, sitting in my room eating Lucky Charms, and watching Python 2 or Megaladon vs. Giant Octopus. They were fun, campy, and silly complete with a cast of nobody actors and a cookie cutter plot, 8-10 people show up to location x, monster x shows up, eats the majority of them, and rinse and repeat. But of all the features of these movies, none was more prevalent than the fact that each and every single one of the gigantic fuck off monsters was made of some of the most horrendous CGI to ever grace the tiny screen. I mean, I’ve seen some bad CGI, but this… This looks like it was created straight out of some teenagers photoshop project gone horribly wrong. I watched them all the time and I absolutely loved them. I didn’t care they were the same plot with the same premise, they were goofy, and it was a way to kill time on a Sunday afternoon.

Needless to say that as the years would go on these movies would start to become a little… Self aware. They realized their flaws and realized what they were, cheesy creature feature B Movies. So they started playing into what people like about these movies and the culmination of that is The Asylum’s Sharknado. One part CGI exploitation, 2 parts insanity, and a big ole dosage of self awareness equals out to what is by all accounts the most popular film in the sub genre. Sharknado’s popularity has won it over in the eyes of people, but as we know in movies, popularity DEFINITELY doesn’t equate to value. So let’s take a look at this movie to wrap up Exploitation April.

After a freak cyclone hits the pacific, picking up with it a massive heard of man eating sharks, Los Angeles is plagued with a barrage of gigantic man eating fish raining down on the city. Bar owner and responsible flannel shirt wearer Fin (Ian Ziering) and his rag tag group of friends decides they must brave this shark raining hell on earth in order to save Fin’s wife April (Tara Reid) and his teenage daughter Claudia (Audrey Peeples). The rest of the story follows the standard B movie, sharks rain from the sky, the Hollywood sign is destroyed, cars explode, and chainsaws fuck everyone up. It is pretty standard stuff.

Surprisingly… And I Do Mean SURPRISINGLY Good Acting 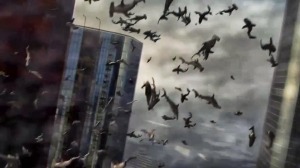 I’ll say it… I like the acting in this movie. It is a little stilted at times, but what do you expect? It is The Asylum we are talking about here. We aren’t going to get acting on par with Brando, Freeman, or Day-Lewis. But seeing as how we didn’t get acting on par with Wiseau then I feel we are in decently capable hands. Ian Ziering is likable enough as the gruff manbody every day protagonist and Tara Reid has always been an enjoyable actress.

I’m not asking for a lot from this movie, but since the actors were able to give some rather admirable performances is saying something about the dedication they had to the film and I applaud them for it.

The movie is called Sharknado. You combined the concept of a big carnivorous fish and a devastating weather pattern. Of course this game is going to be a whole lot of B Movie campy fun. From the drawing board, this movie is meant to be a goofy spectacle movie and it shows.

Sharknado is a straight up popcorn movie. It says on the box cover that this movie is meant to be the movie where you just sit back and watch goofy things happen for two hours. It knows what it is and doesn’t attempt to be anything else and on that front, I can respect it. 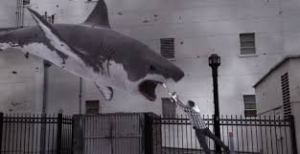 I am well aware that Sharknado was made on a $2 million dollar budget and it shows in the special effects. But that does not excuse you from poor camera work and poor camera equipment to boot. I am not sure what equipment they shot Sharknado with, but it certainly couldn’t have been quality stuff. The movie has this grainy feel to it that would be inexcusable from a VHS release in the 80’s.

Not to mention the camera angles are crap. I can forgive close up shots to step around the fact that you do not have a high budget, but when you have several scenes of ensemble cast conversing and I have absolutely no idea who is talking, this means that you have failed at basic filmmaking. You don’t need the speaker in the shot, but you do have to establish when  the speaker is talking! This is basic stuff! It especially goes when your cast is a nice homogenization of white people who I can’t tell one voice from the other. I’m not asking for Scorsese here, I just want basic film making 101.

Here is where my greatest criticism of Sharknado is going to come. I do enjoy a little self awareness in a movie. It is fun to watch some cheeky fun and see that the movie is just as aware of its silly premise. I like it when they play with that and let the audience know that they are in on the joke as well. However there does come a time when you cross that invisible border of active self awareness into unintentional self parody. This is the reason why I am not a big fan of Sharknado. It crossed that line and became less of the style of movie that I love to watch for it’s over the top camp and more of a movie that seems to make fun of the sub genre.

Sharknado just doesn’t feel sincere. It feels like it is taking a genre I love and crapping on it. You grabbed semi notable actors like Tara Reid and John Heard of CHUD, Home Alone 2, White Chicks, and Prison Break fame. You than toss out a strange amalgamation of two weird things people love to make disaster movies and creature movies on, sharks and tornadoes, and throw it onto the screen and just say ‘look at us being all goofy and not taking ourselves at all seriously. We are so clever, give us cash now.’

Unlike the original movies of the genre like Python, Lake Placid, Boa, Snakehead Terror, and so forth the movie just doesn’t feel genuine. It feels like it is making fun of them and for that… I just can’t get behind it without a lot of guilt.

I cannot get mad at Sharknado, because it is a movie that does not attempt to take itself seriously and is nothing more than harmless fun. It is decently acted and the movie is thankfully aware of how silly it is being. God help us if someone tried to make a Sharknado that was meant to be taken seriously.

But overall, the movie is still poorly made and it feels much more like a spoof of the CGI Exploitation films that I grew up loving instead of part of the subgenre itself. For me, it was a one and done affair. For others, this is your go to movie to grab some friends and watch someone hack a shark to death with a chainsaw. To that I say, enjoy yourselves.

Thank you for reading and as always if you liked this review then please like and subscribe for more. Come back Thursday for a new movie or video game review and on Saturday for a new episode of The Nerdiest Talk Show on Earth.

One thought on “Exploitation April: Sharknado”