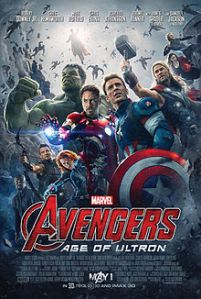 Summer blockbuster season has started! It is that magical time of year again where we flock to the theaters in waves to see the next bright shiny ball of polished media to consume. What a way to kick it off. The first day in May and we have the next installment in Marvel Studios, The Avengers: Age of Ultron. We are now past the point of initial awe of the series and well on a collision course with an end game that I can’t see in the near future… But at least it is a series that is built upon its own awesome… So there is that.

What else can you say about The Avengers at this point? The movies are what they are, small pieces of a much larger puzzle to be pieced together every couple of months for our mass enjoyment. The only problem is how long they can keep this thing up. This is the first movie where I can safely say that it has been beaten by its ensemble cast predecessors and the concept of holding patterns is getting to be problematic for the series. But more on that later.

I guess for the sake of people who will lynch me if I don’t toss this out here, there will be some (not many so fuck off) spoilers in the more analytic parts of this review so if you don’t want it spoiled at all, skip to the conclusion.

The Avengers: Age of Ultron starts in the Eastern European country of Sokovia. The team is raiding one of Hydra’s bases lead by Baron Von Strucker (Thomas Kretchmann). The mad German scientist (as if any other mad scientists existed) has been using Loki’s scepter to experiment with human enhancement on two subjects, Pietro and Wanda Maximoff (Aaron Taylor-Johnson and Elizabeth Olsen). The Avengers successfully raid the base, claim Loki’s scepter, and capture Strucker. However during the fight Wanda/Scarlet Witch  gives Tony Stark (Robert Downey Jr) a very bleak vision into the future.

The Avengers return to the tower where celebrations are in order for the defeat of Hydra. A party is planned, but the primary focus of Tony and Bruce Banner (Mark Ruffalo) is the concept of artificial intelligence that the scepter can provide. After convincing his science buddy, Banner and Stark set to work to create true AI in order to protect the world from alien aggressors. The plan, however, backfires as usual and as a result they create ROBOTIC JAMES SPADER! (Insert your dramatic music stings here.) But in all seriousness, they do create Ultron by mistake, who kills J.A.R.V.I.S, and begins to lay waste to the world in tradition AI, kill humanity, and end the world fashion. The story follows the Avengers as they attempt to stop Ultron from destroying all of humanity. 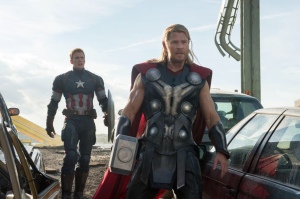 So… The Avengers Age of Ultron is good. It is really good. What more do you want  from me? I could write three different sections of this article on the cinematography, the writing, the acting, and all points in between. But I can just lump it into one giant article which all sums up the fact that The Avengers, like all other MCU movies, is amazing.

The movie looks amazing. From scene to scene, the color, the CGI, and the quick kinetic action makes love to your eyeballs. The story is fantastic! It isn’t going to win any awards for originality, but it is still well told. I love the fact that Ultron never appears sympathetic. I like that they don’t take the ‘he is naive AI that learned the hard way of the human condition’ like Chappie. From the beginning, Ultron is a vindictive, evil, and hateful robot. He doesn’t have sympathy for humans, he doesn’t want to ‘save’ the world. He wants the world to be the way that he wants it. The world that benefits Ultron. Not to mention having him kill J.A.R.V.I.S. is a quick and dirty way to get the entire audience to hate you.

They allude to Infinity Wars, which is the next part of the saga with the fighting between Captain America (Chris Evans) and Tony Stark’s Iron Man. They make Hawkeye (Jeremy Renner) a much better character (more on that later). The relationship between Bruce Banner and Natasha (Scarlett Johannson) is well told and in VERY Hulk fashion. It is an excellent story. Sure, it isn’t about to break ground on any intelligent nuances or redefine the way cinema is made or seen (at least in this film), but you have to applaud when a film knows what it set out to do and does it right.

The acting is phenomenal of course. Across the board, everyone does either a ‘admirable job’ or is just plain amazing. I don’t feel the need to tackle the big actors as they are now going through the motions of the character they played for years. But out of the new characters, they are all strong contenders. Probably the weak link out of the bunch goes to Aaron Taylor-Johnson as Quicksilver. He adds very little character to his moments on scene and is outclassed by his co star Elizabeth Olsen. But don’t get me wrong, he still puts forth an admirable performance.

But out of all the newcomers… It is James Spader that is absolutely amazing… He fucking kills it as Ultron. Of course he kills it as Ultron, he is James Spader! He could be given the role of a rock and he would make that rock the most charismatic, alluring, or in this case intimidating rocks in the history of all rocks. He takes Ultron and turns this AI character into a misanthropic sociopath hell bent on world annihilation because it suits his purpose. He does an excellent job and makes Ultron one of the best villains in the MCU.

Call me a mark for this kind of story, but after the events that occurred in Age of Ultron… Hawkeye is easily the best Avenger bar none. The farm house was a little hokey and ‘cliched’, but the addition of a family and the confirmation of Clint Barton’s family takes Hawkeye from a somewhat joke in the first movie to an all around badass in the second.

The other Avengers are awesome, ‘Gods among men’ as the movie calls them. But none of them truly have families, none of them put their lives on the line every day against world destroying aliens, and he has a family to think about every second that some laser bolt goes just past their skulls. In one movie, they take the character of Hawkeye from an dispensable joke of a character and make him an absolute necessity for the team. He is the voice of reason among head strong super humans. He is the glue that holds people together.

I put this in a special column because it truly is just one scene that I REALLY liked that has very little weight compared to the rest of the movie. But it needed to be mentioned what one movie can do for a character.

Is Avengers: Age of Ultron good? Yes, yes it is a very well made movie. Is it the best movie in the series? Not even close. The Guardians of the Galaxy and the original Avengers movie beats it with ease. This can be a problem when the Marvel Cinematic Universe builds to these major Avengers Assemble! moments. These need to be the defining moments of a series, to be the epic conclusion of the story before building back up to the next phase of movies. Avengers: Age of Ultron is not that. It is a movie that is meant to bridge The Guardians of the Galaxy and the major universe as well as set itself up for the next phase with the story itself feeling a little… Small potatoes. I know saving the world is ‘kind of a big deal’, but when these guys save the world on a regular basis, one sociopathic robot does not feel like a big deal compared to an entire alien invasion.

Simply put, Avengers Age of Ultron is a Marvel Cinematic Universe holding pattern. The great thing about the original movie was that at the end of this epic encounter, the Avengers went to get schwarma from some random joint in New York that was inexplicably open after a near world ending cataclysm. They did not show Tony Stark contemplating the ideas of artificial intelligence or the mobilizing of Hydra, it was simply saying… We are done, take a breath, we will get back to the important stuff later.

In Age of Ultron, they are very clearly setting up for bigger fish to fry. For the sake of the singular movies, this is okay. But for Avengers Age of Ultron it left me somewhat disappointed that this was all I was getting. A pissed of James Spader, which you can find in a lot of other James Spader movies, yes. But I wanted to see a BIG epic conclusion to phase two which I did not get from this movie. It has reached the point that saving the world does not hold its weight anymore. I want something more from my Avengers movies. The single hero focused movies, this is fine. But when it comes to The Avengers, I want more, much more and on that point it failed to deliver.

As much as I find the overall plot somewhat disappointing, that should not take away from the fact that The Avenger: Age of Ultron is a great movie and will most likely be the best blockbuster of the summer. The movie is excellently made, well acted, and it is that big budgeted popcorn movie that you can enjoy over and over again. I would suggest anyone who is a fan of superhero movies, see it as soon as possible.

Thank you for reading and as always if you enjoyed this review then please like and subscribe for more. This review through a few things out of whack though, so Sunday we will have a new episode of The Nerdiest Talk Show on Earth, Tuesday the new special for the month of May, and we will finally be back on track Thursday.

4 thoughts on “Tanner Reviews The Avengers: Age of Ultron”