My God… That was fucking amazing… When I say the following statement, I want it to be known that it is said with absolutely no hyperbole. I honestly believe that Mad Max: Fury Road is one of the greatest action movies to ever be made in the history of cinema. This movie… I can’t say enough about this movie. I feel like words do not adequately do it justice. It is a movie that takes all the best parts of what makes action movies great and discards all the worthless shit that people cannot stand. This is a movie that will never in a million years be nominated for an Academy Award, seeing as how the Academy doesn’t like movies like this. But this is easily going to be one of, if not THE, best movie of 2015 and one of the best movies of the 2010’s. It is simply phenomenal.

The story of Mad Max: Fury Road follows are intrepid hero, Max (Tom Hardy), has he wonders the desolate wasteland that was once the World in the wake of a nuclear war. Max is captured by a group of bandits known as the War Boys and are taken back to the Citadel to be a living blood bag for some of their soldiers. The Citadel’s cult leader, Immortan Joe (Hugh Keays-Byrne), controls his people with an iron fist. He controls their food and their water supply, keeping the best for himself and giving his people the scraps. One day, one of his trusted soldiers Imperator Furiosa (Charlize Theron) is sent on a supply run to Gas Town to collect more fuel for his army.

However, after she is outside of the Citadel, she takes a detour and starts heading into the desert. It is revealed that Furiosa rescued Immortan Joe’s five wives and is attempting to take them to ‘The Green Place’ where she is from as a kid. Immortan Joe rallies his entire army as well as the armies from Bullet Town and Gas Town to capture Furiosa and reclaim his wives.

Max is taken into battle by a War Boy named Nux (Nicholas Hoult) who is looking to die in a blaze of glory in order to travel to Valhalla, the makeshift heaven Joe cultivated for his war boys. Max is able to free himself and joins Furiosa as he, her, and Joe’s wives attempt to escape to the Green Place.

The Practical Effects and the Look 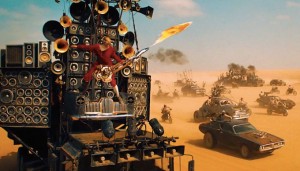 If anyone remembers my love for The Thing, than you will know my love for practical effects. I do not hate CGI effects in the slightest. They add a dimension to movies that you simply cannot recreate with practical effects. But I have always firmly believed that you should not use CGI as a shortcut instead of using the real deal. This movie is a poster child for practical effects and how the use of them and the use of your surroundings can make a far superior movie. This is a movie where they smash cars together, blow shit up, and all of it looks absolutely fantastic! The effects add to the action and the realism of the movie on-screen.

Any other movie of this time would just say ‘eh we will film in a room filled with green screens and just put the cars in’. This movie is why you shouldn’t do that and you are stupid for taking that route. George Miller put two years alone into the making of the cars and the work shows. It adds to the realism and it engrosses you into the world. Taking that extra step is enough to take the movie from good, to amazingly memorable.

Also, I may be in the minority here, but I am sick and tired of the ‘dark movies’. This is the Batman Problem, as I will call it. All of these movies are filmed in these dark locations, while all the characters are wearing black, and you can’t tell what the fuck is going on. I love that the ‘look’ of this movie is very colorful. There are dark colors, yes. But they are indicative of the scene and instead of using ‘black’ they are typically blue. Such as scenes from the swamp where the night-time is a sort of ‘blue night’. The color contrast is great and the environment of the Australian outback is used to great success.

One of the greatest things that I love to hear about this movie from friends is this: “It is great! There is no down time, it is non stop action!” I love this, because it is technically wrong. BUT let me stress, this is a VERY good thing! This is a testament to how well this movie is paced in terms of writing and directing from George Miller and his writing team of Brenden McCarthy and Nico Lathouris.

I can guarantee 5 to 10 years from now this movie will be shown in filmmaking/screenwriting classes as an example of how to properly pace an action movie. The action scenes are non stop, heart in the chest action. The downtime doesn’t necessarily have to be a time that anything is happening. Downtime can include Max holding the women at gun point while he demands they let him drink water from the hose or when they are attempting to drag the monster rig through a murky swamp. Even moments when it shows the Rock Rider sleeping in his bungee cords with his guitar hanging underneath him is a very short lived scene, but it gives the audience a chance to absorb more of the movie, AND gain more exposition from characters. It is excellently done.

Another thing that I ABSOLUTELY LOVE and it is something so small that it will go unnoticed by most. Just after some intense action scenes, dramatic scenes, and it is time to transition to the next part of the movie, they hold the fade to black for just a split second more than a regular movie. I would say that each fade to black lasts… maybe 2 seconds. But those two seconds are so unbelievably important. It is just enough time to get in a full inhale of breathe. It is enough time to process the awesome that is this movie and I absolutely love that level of thought that went into the making of this movie.

The Innovative Nature of the Movie

This is a movie that has so much going on, that has so many tiny aspects that will go unnoticed by so many, and it is done so well by George Miller, that I feel a lot of people will miss just how new and innovative the concept of Mad Max: Fury Road and how it can completely change the genre for the better. First and foremost, the majority of the characters are not overly sexualized for both men and women. Yes, the ‘wives’ or women selected for breeding are somewhat, but that is because they are a group of sex slaves. It makes complete sense why they are scantily clad and their white, clean, and pristine look gives a great juxtaposition to the grit and dirty feel of the world. But other than that Charlize Theron is not in the least bit sexualized. She is a warrior and she behaves as such, she dresses as such. Tom Hardy is a good-looking guy, but there is never a moment where he has to take off his shirt to show off his nuggetty undercarriage. The other characters in the world are all relatively nasty looking people. It is clear that this hard life has had its effect on the people and none of they all look horribly haggard.

It also shows that the ‘action hero’ does not have to be the focus of the movie nor do they have to be the most competent of the group. The movie of Mad Max: Fury Road does not have Max as the main character, the movie focuses around Furiosa and her struggle to save these girls from slavery and bring her back to the Green Place, a sort of Mecca where they can be safe and live their days the paradise of the wastelands. Max is there and Max’s story is told through brief flashbacks. You do not have to see the other movies to know that Max has suffered severe loss and it is showed that in quick flashbacks. You get all of Max’s story in quick tidbits. He is not important, the person who is important is Furiosa, her struggle, and her desires for her and her friends to have a better life.

Not to mention, Furiosa is also an amputee, she lost her arm at some point in this horrid world. She is rocking a sweet robotic arm. This is just one of the many cases of people who do not typically have the ‘action movie look’ kick massive amounts of ass. Sure, you have your Nathan Jones who is a big, muscle guy. But the main villain in this movie looks to be overweight and deformed. The villains like The People Eater (John Howard) is overweight and deformed at the ankles. The character Nux (Nicholas Hault) and the other War Boys are riddled with cancer and dying. Furiosa’s former gang, an all woman group known as Vuvalini are made up of mostly old women. These are not your typical action movie characters and yet they kick MASSIVE amounts of ass through this barren wasteland. I love that this movie is not filled with sexy, beautiful people. It is filled with survivors! They are rough, they are beaten, their bodies are ravaged, and it just shows how much this world has affected humanity. It is an excellent addition to the movie.

This movie has changed so much. The look of the action heroes, the focus of the movie, the representatives of all walks of life, the harsh environment, the elimination of a ‘needed romance’, the practical effects, and simply the loving of all things awesome have made this movie an absolute gem.

I just said it, I will say it again, this movie is phenomenal. It is a movie that celebrates the concept of the action movie. I am not typically one to say this or attack someone for not liking something/liking something, but if you do not like this movie… Than you simply do not like fun. It is that good!

The pacing is spot on, the effects look great, the acting is great, the casting is great, and it is a movie that has completely turned everything we know about action movies onto its head. It won’t be nominated for an Academy Award, but this is easily one of the best movies of this year without a shadow of a doubt in my mind. If you haven’t seen it, go see it AS SOON AS POSSIBLE!

Thank you for reading and if you liked this review, please like and subscribe for more. Well I’m starting to come down from the action boner so I think I am going to lay down for a while. Come back Saturday for The Nerdiest Talk Show on Earth.