We are coming into the home stretch of this special on the WWE’s Championships through the years. We are now down to only the two secondary titles (Intercontinental and US) as well as the big boy, the WWE World Heavyweight Championship. This is going to get to the real meat and potatoes of the belts that the WWE recognizes and still defends to this day.

Before we get to the Worst and the Best of the US Championship, you NEED TO REMEMBER that this is a WWE ONLY list. In other words, even if the belt’s lineage includes the NWA/WCW lineage, we are only focusing on the belt since its reincarnation and initial title reign held by Eddie Guerrero in 2003. With that said, let’s get started with the lemons that hold the prestige of this belt down.

It is hard to believe that someone like Bret Hart would find himself on the ‘Worst’ list, especially since the man is currently dancing around entrance on the Top 10 for Best WWE Champions of all time. But you need to keep in mind that this is not 80’s and 90’s Bret Hart we are talking about here. This is 2010 Bret Hart we are talking about here. The well seasoned and gray Hart won the United States from The Miz, breaking an amazing 228 day title reign in order to give the man a title win in his home country of Canada.

It is easy to see that this was a throw away title reign. It was meant to give the Hitman a title reign to commemorate his time and effort with the company as well as be a minor consolation to the Montreal Screwjob. But after holding the title for only a week after winning it on Raw, Bret vacated the title to become Raw General Manager. R-Truth won the title that night after defeating the Miz, thus making the reign almost meaningless.

Oh Carlito Caribbean Cool, Carlito will forever be known as the man that could have been a megastar in the industry if he could have been persuaded to GIVE A RAT’S ASS ABOUT ANYTHING! Seriously this guy had charisma, athleticism, and lineage all in his back corner. He had to work to fuck himself over and he did so and did it in spectacular fashion. Due to the fact of what Carlito did and what Carlito could have been, it will forever leave a stain on his accomplishments in the WWE, one of which was a one time US Title Reign.

Carlito feuded with John Cena in the early 2000’s in what was a decent feud. Carlito took the title from Cena and held the title for a month before he dropped it back to the former Doctor of Thuganomics. What earns this reign a spot on this list was the fact that it was A) forgettable and B) part of Carlito’s disappointing lineage.

I did not want to put Ryder on the list. I really didn’t want to… But this is a fact that my enjoyment of Zack Ryder cannot beat the fact that this title reign was a terrible consolation prize that the WWE begrudgingly gave to Ryder who got himself over by going to YouTube instead of going through the WWE’s traditional ‘kiss my ass and maybe you’ll get a shot’ ways.

Zack Ryder remains incredibly over with the crowd, despite the fact that he is nothing more than a jobber in the eyes of the WWE and is used as an example to future wrestlers of what happens when you try to strike out on your own. Ryder won the US Championship from Dolph Ziggler at TLC and than lost the title a month later to the ever dull Jack Swagger on an episode of Raw. Sadly that pretty much spelled the end for Long Island Iced-Z who now languishes in WWE jobber hell with Heath Slater. At least Justin Gabriel had the common sense to walk away.

Okay… I am going to start this off by saying that I do love Santino Marella. He is the perfect comedy gimmick wrestler. He has a small frame, great comedic timing, and gets huge pops from the crowd. I do love him, he was the best comedy that WWE did in a while before they went back to their regular stupid and childish shit… Though Marella was childish, but not in an annoying way… MY POINT IS that I like the guy. However, I have said this before and I will say this again, if you want your title to remain prestigious, you cannot give it to comedy acts. I am sorry, it is a rough deal, but if Marella wants a title reign than he needs to be a legit competitor or he can be a beloved comedy act. You cannot be both. But the WWE’s wacky booking over the years has done away with this premise and is now one of the main reasons why the belts are widely considered to be little more than props now.

Marella won the title the aforementioned Jack Swagger on an episode of Raw. He would hold the title for 167 days before losing the belt to the Swiss Superman and human powerhouse, Antonio Cesaro, one of the greatest things to happen to wrestling in a long time, thankfully ending the title reign. Marella is a great guy, but not meant to be a champion. 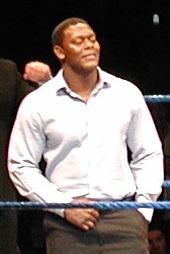 I think this one was obvious. You will find few people who will disagree that the worst WWE US Champion since the title’s inception was Orlando Jordan. While he has shown signs of brilliance since his WWE release, Jordan, while in the WWE, was an absolute bland wrestler in every since of the word. He was your typical nobody wrestler who put on a standard move set, went through the motions, and finished with very little reaction from the crowd. While he did receive a minor push as a member of John Bradshaw Layfield’s cabinet… He really wasn’t anything special.

Which is more than likely why Orlando Jordan won the title from John Cena of all people back in 2005. This is another odd booking you will see from WWE from time to time with their belts. You see, when a character is not getting over with the crowd or is still a little ‘green’, they hand a belt to them in the hopes that being a ‘champion’ will elicit some kind of response. It tends to be a risky strategy, to be sure, but if it works, it does decently well. When it fails however, you are almost guaranteed to find yourself on the ‘Worst’ lists. Jordan held the title for 173 days before Chris Benoit took it at Summerslam. After that Jordan didn’t sniff gold in the WWE again and for good reason.

I am typically not one to shower praise onto a ‘recent event’ when it comes to wrestling in order to obtain some level of views for the sake of it, but it is in my honest opinion that Rusev’s United States Title reign was one of the few good things that occurred to the WWE in 2014 and landed him a spot in the top five list by sheer force of will. Rusev (real name Miroslav Barnjasev) is an amazing new talent with the WWE and was quickly packaged in the traditional old fashion foreign heel gimmick so an US title reign made sense.

Rusev, with his manager Lana, made a memorable 140+ day reign with the US Championship that garnered great heat from the crowd at every venue. Tragically, it was cut short by John Cena who killed the momentum of yet another young talent, but it cannot be denied that this was an excellent reign with the belt.

While many will argue that Ambrose’s 351 day title reign is mainly due to the fact that he rarely defended the belt, but you cannot deny that a 351 day title reign in today’s fast pace, title changes hands at the drop of a hat atmosphere, is an impressive title reign to behold. Dean Ambrose, while a member of The Shield, took the title away from Kofi Kingston in a decent match at Extreme Rules.

Ambrose’s US title reign is officially the longest under the WWE Banner and it brought legitimacy to the title while being held by a member of The Shield, one of the best gimmicks in recent WWE history.

The gold standard and one of the most athletic wrestlers the WWE has ever seen, Shelton Benjamin joins an illustrious list of African American wrestlers who were robbed of a place as the WWE Champion. This guy was charismatic, good with in ring psychology, and was a beast when it came to high risk spots, and athletic maneuvers. Shelton Benjamin earns a high spot on any list that he held a championship.

Shelton Benjamin had only one US Title reign, but the 240 day reign was an amazing return to the ring and an excellent run with the title. It also helped break up the MVP/Matt Hardy feud and was just above all else a great reign with the belt.

Speaking of other African American wrestlers who are robbed of being much higher on the card, Kofi Kingston was a much more athletic and charismatic version of Shelton Benjamin. Just like Benjamin, Kofi is placated with several high mid card bouts, most of which involves the United States or Intercontinental Championship. Kofi is always entertaining in the ring and brings that entertainment to any title he holds.

Kofi held the title three times, as of this writing, spanning a total of 209 reigns. Kofi is currently in a good heel gimmick with Big E and Xavier Woods as The New Day. I am truly hoping they are able to get behind another singles run here in the near future. 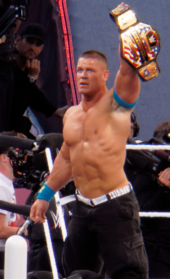 Could it be anyone else? Whether you love him or hate him, there are few people who were able to bring prestige to the current US Championship than John Cena. This was his first championship run when he was on the rise as the Doctor of Thuganomics and has since became the recent champion in a movie that is genius from the WWE to bring prestige to a title by having it held by their number one guy AND getting him out of the main event for a little while.

Cena has held the title 4 times and has had excellent feuds with the belt that include The Big Show, Carlito, and Booker T. He may be controversial, but the man certainly earned his spot on the top of the WWE US Championship pile.

Thank you for reading and as always, if you enjoyed this review please like and subscribe for more from me.