Praise GabeN! Once again, the benevolent one has given me a game to play for a three-day period… Which is perfect for my critical mind. What a treat! …Well, except for the fact that the game that Steam gave me to try out was a First Person Shooter featuring divers and sharks named Depth. Depth is an interesting little title from the independent developing team, Digital Confectioners. Most certainly a novel concept and one that is at least original in design, Depth tragically falls flat on every other area besides its interesting premise.

In Depth, you enter into a competitive multiplayer arena on one of two 4v2 teams. On one side, you have the divers, a group of four players who are tasked with guarding S.T.E.V.E., a probe meant to collect treasure in sunken ruins. You have to guard it from two sharks whose job it is to kill all the humans and destroy S.T.E.V.E… What is so important about this treasure that you would be willing to risk the lives of four people just to protect a robot is beyond me… But moving on. Simply put, the goal of the game for the humans is to collect the treasure and make it back to the boat alive while the sharks goal is simply to eat the humans and destroy S.T.E.V.E. 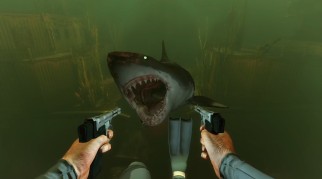 In the right hands, this game could have been a juggernaut. The idea of a game of sharks vs. humans is a cool one and everyone can get behind the whole man vs. nature concept. Not only that, every since the First Person Shooter genre began to become ‘the same old dull militaristic bullshit’, people have been looking to spice things up with concepts like ‘let’s have a team of people go against one super powered monster.’ If this is the path that the FPS genre is going, than Depth is ahead of the curve to create a fun little concept.

You will be hard pressed to find a person who does not have at least a curious fascination with sharks. They are as old as the dinosaurs, vicious predators, and thanks to Jaws, almost universally feared as the predator hiding under the glass surface. To create a game where you play sharks while you eat humans is not a far stretch from awesome. If only it were executed better or not in the fledgling FPS genre… Oh well, one can dream.

Treasure Pool is a Bad Idea

One of the main concepts of the game is that you search for loose treasure as a human when you are not being hunted by man eating sharks. You bring the treasure back to S.T.E.V.E. and you get money that goes into a collected pool  that is shared with the other three. With this money, you can buy weapons, upgrades, aid, and so forth. Now, I understand why you have upgrades in there and a currency system. At this point, it is lazy gaming shorthand for increase the challenge without us doing a lot of the work, but I can let that slide. Having a shared pool of money, however, is not a good idea.

First off, one player can easily horde all the money for themselves, buying upgrades, weapons, and so forth while screwing the rest of their party. A player doesn’t even have to collect money for their team and can just sit back and reap the rewards while the others do all the work. I know, if you do this, it hurts the team. But if you join a random game like I did, chances are you do not have yourself hooked up to talk to others online or have the time to type out commands to the others. So you have four people playing blind, buying items, and buying power ups to keep themselves strong instead of benefiting the team at large. A privatized currency system would be a far better option and would create more equal gameplay. 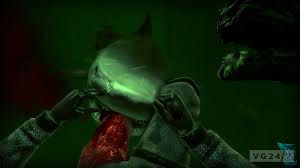 Gameplay is All Fucked

If you are not the best aim in standard FPS games… Oh boy, get ready to get some serious vertigo with this one because the camera and the mouse hate your guts. As a human, you will find yourself in a battle with the aiming device as your mouse will want to send you on a whirlwind to try to lock on to a damn shark that is zipping through the water at breakneck speeds. Most of the time, I found myself firing wildly at nothingness in the hopes of killing a shark.

Oh and if you think it is easy to shoot a shark when they got a human… I got some bad news for you. Sharks will start flailing about when they grab onto a person and not in a good way. Instead of a thrashing shark that caught its prey, sharks spin around like they are on some sort of weird tilt-a-whirl for several seconds before it inevitably tears your partner a new one.

I wish I could say how my experience was as a shark, but after several play-throughs I was never assigned the shark and most of my time was spent sitting on my couch with the play button grayed out and unavailable.

Simply put, this game is just plain unbalanced. Sharks are at a major advantage in this game. Unlike Evolve, where there is a 4 on 1 element but the game is still evenly balanced, Depth sports a 4 on 2 mechanic where sharks have all the power in the world and the humans are helpless to do anything. This is due to the lack of communication between parties and the fact that once a shark has you in his jaws, you are pretty much finished unless you have several other players around you to shoot him off… Which you won’t.

If this were a game of 4 humans to one shark… That may be a more balanced game, but as it stands, Depth simply is too unbalanced to gain any real joy unless you are playing as one of the sharks. If that is the case, you will have a blast because you will win every time.

This game gets points for being a good concept and functioning, for the most part. But overall, Depth is a disappointing play. The game is unbalanced, the gameplay is poor, and it is hopelessly one sided. Even for the most forgiving of gamers, they will play this game, say ‘Eh, that was fun’, and then go back to playing their tried and true favorites instead of this game.

This game may be worth a buy if it is on sale. But trust me when I say that a few days after you buy it, it will find itself in that nice little grayed out section of your Steam Library of games that you will never play again.

Thank you for reading and as always, if you enjoyed this review, please like and subscribe for more from me. Come back on Saturday for a new episode of The Nerdiest Talk Show on Earth.

One thought on “Tanner Reviews Depth”