It is very rare that I see a Steam Pre-Release that I enjoy. Typically, I detest the process as nothing more than developers tricking gamers into buying woefully unfinished games. They than claim that they are ‘out of beta’ and sometimes make gamers buy the game all over again. But in this instance, I have to say that I was pleasantly surprised by the immersive experience given to us by Beam Team Games, Stranded Deep. A story that doesn’t  take a page from the movie Castaway’s book, but takes the entire book itself down to the point that Wilson makes a cameo appearance, Stranded Deep is one of those games that you can find yourself lost in for days.

In the story of Stranded Deep, you take on the role as a nameless jet-setter on his trip across the Pacific Ocean. However, things do not go right as the plane goes down in the Pacific and the pilots are killed. You, being the only survivor, find your way to a life raft and have to paddle to a random island. After that, it is the story of survival as you craft yourself weapons, house, and forage for food in order to survive this deserted island chain. 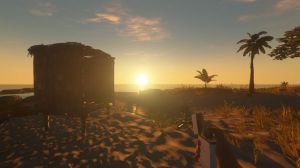 I hope you are ready to give hours of your life to this game, because you will get sucked into it, and it is going to be quick. It is a simplistic concept and one that you will enjoy for hours. You will build a new home for yourself on an island. You will build a shelter, collect food, you will begin to organize your items. You will want to sail to the other islands in this world just to see what is in store. You will fight sharks and hunt for food. There is so much to do and so much time to do it in. This is a game where 30 minutes will turn into 6 hours very quick!

Crafting has been something that has become practically ubiquitous in video gaming. Even games that have absolutely no need for a crafting system seem to shoehorn them into it just to keep up with the trend. Most indie games now that do not take the artistic route have some kind of crafting system. But… For as much as a harp on this area as well, Stranded Deep does the crafting system in a way that works and works well.

You see, you are set adrift at shore with a few things at your disposal, a bottle of water, a lighter, a pocket knife, and a watch that conveniently tells you your health, food, and water needs. You are going to need food, water, and a shelter if you want to survive and that little pocket knife only has so much life in it before it breaks. So you need to fashion some tools. You can make a hammer, an ax, a knife, and a spear out of your crudely made sticks, rocks, and lashings from Yucca plants. After that, you can build a shelter, and forage for green coconuts and crabs. The coconuts you will need to shave down to drink and eat. While the crabs you will need to cook over an open flame.

The crafting system not only makes sense, but is vital for a survival situation. It is the primary component of the game and is executed perfectly. 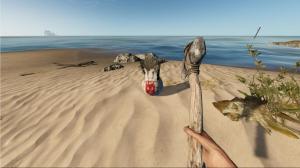 Glitches Can Be Enjoyable

As Skyrim proved, sometimes a glitch can be fun and enjoyable. Most of the ‘glitches’ and ‘problems’ with Stranded Deep comes from hilariously enjoyable glitches. My personal favorite is the fact that you can use your raft and oar to paddle across land as well as water… And at the same speed too! The only thing that really gets in your way with that little raft is trees and rocks. There are tiny glitches and minor nonsensical things throughout the game, like being able to smash a rock into small shards with a pocket knife, but they all add to a sort of campy (no pun intended) experience.

Glitches can be irritating, yes. But when they add in some unintentional humor or an unexpected bonus, you can get a lot of enjoyment out of them and Stranded Deep certainly benefits from this.

No End Game in Sight

This game is in desperate need of an ending. As of right now, I do not know if there is a way to be rescued from this island, but by all accounts with the items you can collect, it would seem that rescue is a possibility. You can build a motorized raft, have a whistle, and a flare gun as all possible items which hints, at least in my mind, that the end game is to be rescued by a search party or a passing by boat.

If there is no ‘end game’ than this really hurts the game as a whole as it makes playing the game essentially pointless. It is fun to be on a deserted island and surviving. But I would like to be rescued from this island so I never have to eat coconut or crab ever again. This may be due to the fact that game still isn’t finished, but if they do not add a way to be rescued then this is a MAJOR flaw of the game.

All things considered, Stranded Deep, albeit good, is still a one note game. You are on an island and you survive, that is the end of it. It is a minor nitpick at most, but there isn’t any substance beyond that and in today’s day and age, you need to give a little bit more if you expect someone to pay $15.00 for the title. Games like Portal are cheaper than Stranded Deep and offer much more substance. Even games like Brothers: A Tale of Two Sons and the legendary Grim Fandango remastered are the same price and have much more substance packed in them than Stranded Deep.

Stranded Deep suffers from a similar problem as Gone Home. They are both packed with fun and intrigue… Yet after you get past the premise, there isn’t much to bring you back. If they do add an end game, as I mentioned before, this game can get some more fun as you are now attempting to be rescued… But as it stands, there isn’t much to it besides the gameplay to keep your butt in the seat after the initial joy leaves.

This game has made a believer out of me. I have been critical of Steam Pre-Releases and crafting systems in the past. Yet, it has given it to me in a package that I thoroughly enjoy. The game looks pretty and is so immersive that you will be lost for hours trying to build a world for yourself out of some coconuts, some trees, and rocks.

There are some glitches, it is pretty one-dimensional in design, and there is no end game in sight… Which the game definitely needs. But beyond that, Stranded Deep is still a solid title and one that everyone should give a chance if you see it for sale on Steam.

Thank you for reading and as always, if you enjoyed this review, please like and subscribe for more from me.