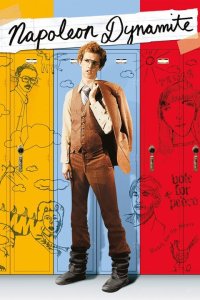 We open the vault once again for another interesting little movie that was never meant to be anything big… And then everyone in 2004 collectively lost their fucking shit. One day the world was normal and the next day you couldn’t walk five steps without seeing a “Vote for Pedro” shirt or hear someone say “GOSH” in that dead pan expression that only Jon Heder could produce. Also, who could forget the bizarre opening title sequence that somehow worked so well to introduce the film as someone kept placing random items in the frame? Needless to say, the movie is certainly memorable. But the question still remains, does the film still hold up after being out there for almost a decade?

Napoleon Dynamite is the story of a nerdy 16-year-old kid from Idaho by the same name (Jon Heder). He lives a boring and dry life which features going to school, getting bullied, and drawing random pictures in his notebook. Over a series of random events, Napoleon becomes friends with a new student named Pedro (Efren Ramirez) and a girl named Deb (Tina Majorino).

While the movie seems to meander around aspects of Napoleon’s life, the plot eventually seems to focus on the school dance and Napoleon helping his friend Pedro run for class president.

If you want an original movie, look no further than Napoleon Dynamite. I have not seen a movie that seems to write a love letter to deadpan comedy. It is a movie that feels flat, and by all means, should be flat. But it is somehow through this flat, dry comedy, that you are able to create a lively and interesting product. It is a movie that loves to create deadpan and situational comedy as well as anti humor.

Why is the shirt with half of a horse plastered on the side of it funny? I don’t know but it works. Why is the concept of playing tether ball funny? Once again, I have no idea but it kind of works. The movie is a poster child for shit that shouldn’t work, but somehow it comes together in a way that will make you smile. 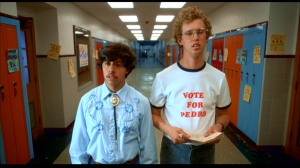 The Movie Has Not Aged Gracefully

Some things age like a fine wine and other things age like milk… Napoleon Dynamite is the latter of these two options. It is hard to pin down what has made the movie fall from grace. Maybe it was constant quoting and Hot Topic merchandise sales that sullied the movie in the public’s eye, maybe it was the fact that the movie, maybe it is after the romanticism of something new wore off people grew tired of it. But in my opinion, what I think kills Napoleon Dynamite’s rise to greater heights is the fact that, once you dig deeper, the film simply doesn’t resonate with people.

People go back to movies like Mean Girls, Jurassic Park, The Breakfast Club, Rocky, and so forth because there is something there that you relate to or keeps you wanting more. Jurassic Park inspires wonder in us and even after decades of development, the movie STILL looks polished and stunning! Movies like Mean Girls and The Breakfast Club remind us of our past and people that we knew or even people we can find a relation. I’m sure everyone was aware of the clique characteristics that often follow high school and The Breakfast Club takes that concept and shows the human side of simple cultural divides as does Mean Girls. Rocky is a movie of inspiration, something that can push all of us forward in our various hills to climb. We are not boxers, but we can certainly feel inspired, and keep feeling inspired by the story of Rocky Balboa.

Napoleon Dynamite, once you get past the design and deadpan humor, is void of anything truly relatable. It comes close in the realms of a nerdy person, living in a small town, in the middle of bum-fuck-nowhere, finds friends, and finds his identity. Relatable, yes? Well at face value, yes, but let’s dig deeper. Napoleon Dynamite exists in this sort of reverse universe where things feel like they have substance, but are really just made of cardboard.

The town doesn’t feel ‘real’ it feels like a strange amalgamation of various small towns. They get the atmosphere of a small town right, but they decided to sort of combine small towns in Nebraska, Texas, and Idaho together to make some weird conglomeration of an ideal small town where nerds are ostracized.

But moreover, let’s be honest, how many people knew an actual Napoleon Dynamite? I bet not that many. Everyone knew of Anthony Michael Hall’s character Brian from The Breakfast Club. He was a nerdy, dweeby, yet all around good-natured sort of person. Napoleon Dynamite is like a cartoon (probably why they made a cartoon of the movie). He is this awkward looking kid who dresses outlandish, talks in a dead pan expression, looks bizarre, and just all around acts… off. He doesn’t feel like a real person, he feels like what a person who still lives in the 80’s and thinks nerds are lame would create as a nerdy person. Someone who couldn’t possibly exist. On the whole, that tends to go for all the characters in this movie. They don’t feel real, they aren’t relatable.

So at the end of the day, what you essentially have is a lie. At face value it is a deep and interesting story, but when you dig deeper you realize that there just isn’t a lot there to make a compelling movie last longer then what it is intended to do. It is like eating junk food, instant gratification followed by a feeling of nothingness.

Does Napoleon Dynamite hold up over time? Sadly not, it is a movie that is just so shallow, but it is able to hide its shallow nature well enough to make people love it before they simply lose interest. If you love deadpan and anti humor I would give it a watch again, but if not, you can find better cult classics out there to occupy your time.