Alright, I tried to review this during the summer and it didn’t work out so hot. That is what I get for my schedule, even in the summer, being shit. But now I can give it the critical review that it deserves! I can’t say that I am at all surprised by what I saw. It isn’t so much a bad thing as it is an expected thing. San Andreas is one of those movies that was tailor made for the summer blockbuster. It is a flashy, high action disaster movie that is intended to give you that sweet sensation of adrenaline before you go on with your day. While it may not have a sustained longevity in our memories, San Andreas is still solid on its own merit.

Ray J Gaines (Dewayne Johnson) is a rescue technician and helicopter pilot who is currently in the midst of a divorce with his wife Emma (Carla Gugino). One day Emma, her and Ray J’s daughter Blake (Alexandra Daddario) and her new boyfriend, Daniel Riddick (Ioan Gruffard) take a trip to San Francisco on the day that the San Andreas Fault begins to shift, creating a 9.1 Earthquake that begins to tear the state of California a new asshole.

In the chaos, Emma is able to call on her dad who quickly jumps to the rescue in amazing vehicle stealing action as he tries to find his way into San Francisco to save his wife and daughter from the collapsing city.

Not Roland Emmerich Levels of Crazy and Excellent Directing

Instead, the film’s director is Brad Peyton. He is a relative new comer, but in his first major directing role (I don’t really count Journey 2 as a major motion picture) Peyton creates a tight and fun disaster movie that does not rely on numerous deaths of tertiary characters, cheesy one liners, or disaster moments that screw with the laws of probability. Granted, a few of them do exist, but they are few and far between compared to the central piece of the film like in most of Emmerich’s movies.

I’m not going to bash Emmerich all day and blow sunshine up Peyton’s ass, but a new director was the right choice for this type of movie. It has a loud, but somewhat drawn back tone that simply works in every way possible. 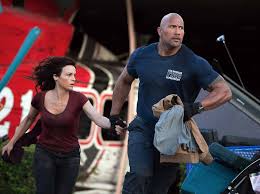 Bottom line, San Andreas is a popcorn movie. It is one of those movies that you need to make some popcorn, get the biggest television you can find, watch, and enjoy. Building collapse, cars get destroyed, their is mayhem, and destruction as far as the eye can see? What is not to love about watching Nevada quickly become new beach front property and California transitioning into island life?

This is one of those movies that you need to go into not expecting amazing acting or an original story. It is good ole fashion fun. 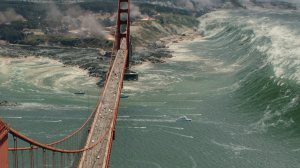 All Action and No Substance

Beyond the loud bombastic style, is there anything else to this movie? Simply put, no. I have been struggling to think of things to say about San Andreas but for the most part I have come up with a whole lot of blanks. There isn’t much to say about it, it is a fun movie that has nothing else to it than being a flashy disaster movie.

The story is cookie cutter to say the least, the acting is not bad, but it certainly isn’t anything praise worthy. It is just one of those movies that gets by on gimmick. It is the disaster movie about the San Andreas Fault, no more, no less.

Overall, there isn’t much to expect from a movie like San Andreas. It is a good summer blockbuster popcorn flick. It isn’t meant to be much more than it is which is fun, flashy, and lacking in any real substance. If you are a huge cinephile, than I would attempt to stay away from this one.

But if you are the kind of person who wants to turn your brain off and just watch cars getting smashed and buildings getting broken, this movie is definitely worth the watch.