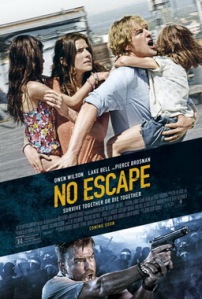 So on the opposite side of the coin, after seeing a movie that I thought was going to be bad, but turned out to be good. The next movie I saw was a movie that I thought was going to be decent, but turned out to be festering shit. That may be giving too much away on that one, but I have never been one to be the master of subtlety or waiting for the perfect moment to drop the critic bomb. But in either case, let’s talk about the strange anomaly that is No Escape. I didn’t think a movie like this could exist in this time, but I’ll be damned if I was wrong on that one. I never thought I would see a movie in 2015 that was so unintentionally xenophobic and racist that I was expecting someone to just appear in yellow face shades of Breakfast at Tiffany’s.

The story of No Escape is about an American named Jack Dwyer (Owen Wilson). He is an engineer who recently took a job at a water treatment plant in a Southeast Asian country that isn’t Cambodia, but is totally Cambodia. He is now flying him and his wife Annie (Lake Bell) and two daughers played by Sterling Jerins and Claire Greare to the country to start his new profession. When the Dwyer family arrives, they meet a mysterious British guy named Hammond (Pierce Brosnan) and his friend so obsessed with Kenny Rogers that he named himself Kenny (Sahajak Boonthanakit) who give them a ride to the hotel. Once there, the family is saddened to find that most of the electronics do not work and the hotel is in rather rough shape. Throughout the night, the family hears fighting and explosions but doesn’t think anything of it.

The next day, Jack gets caught in the middle of a fight between rebel forces and police officers. He learns that within the span of a few hours, a rebel group who protests Jack’s company coming to the country have staged a Coup and are now murdering Americans and really anyone who is white on sight. After this is discovered, Jack attempts to get his wife and kids into Vietnam, where they will be protected by amnesty.

Not Your Typical Action Movie

I will give it this, it is a refreshing change of pace to see an action movie about some non ultra badass characters. There is a place for your Jason Stathams, Sly Stallones, and other action heroes like that, those are completely fine. But I do like it when we can focus a story on a family of four being put in a horrible situation and having to try to find a way to survive it all.

It isn’t much of a pro since the concept is solid but the execution is very sloppy, but I can still give it credit for coming up with something that could have been a good movie. 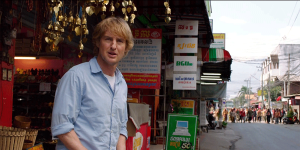 With the exception of Pierce Brosnan, whose story makes me want to watch that movie instead of this one, everyone else is very much miscast. I can understand that a comedian wants to make a serious movie, I don’t fault people for it. I can understand that Owen Wilson wants to do a movie that isn’t a comedy or at least get back to his non comedy movies… But this simply isn’t the movie for it. Owen Wilson doesn’t have the look of a person that you want to see in this conflict. There are several moments that you are waiting for a cheesy Owen Wilson quip to be inserted into the movie, but instead of a quip we just get more violence. I get that sometimes the clown wants to be serious, but Wilson’s presence in this movie detracts you from the action displayed! You are just waiting for the comedy shoe to drop.

His family isn’t much better. The two girls who play his daughters are bogged down by crappy dialogue, so already they were hamstringed from the get go with terrible quips like ‘Daddy, I’m hungry’ or ‘I need to pee’ after they damn near got killed by a fucking tank. I know they are in shock, but you can give them some better dialogue than that and Lake Bell just feels completely out-of-place in this movie and has very little chemistry with Wilson.

Besides Pierce Brosnan who delivers a stellar fucking performances, the movie just feels off thanks to some horribly miscast main characters.

This movie has already been banned in Cambodia and I can definitely see why! This movie does not paint the country in a positive light. Granted, as I said earlier, Cambodia is not specifically mentions in the movie. But they do state that it is a Southeast Asian country, the family has to make their way to Vietnam, only three countries border Vietnam, Cambodia, Laos, and China. China is not considered ‘Southeast Asia’ and the cherry on the cake is that many of the symbols on the riot shield are the ones found in Cambodia, only upside down, so it is a pretty foregone conclusion that you are dealing with Cambodia.

I can at least get it that you want to make a movie about a Coup and you don’t want to go the Middle Eastern route, so picking a country can be a bit of a tricky subject and they even try to insert ‘sympathetic’ quips about the people overthrowing the government. But when the entire movie is about a group of people from this country armed with sticks and whatever they can find in their hand knowingly and deliberately butchering anyone who is white, this movie takes on some serious xenophobic overtones. 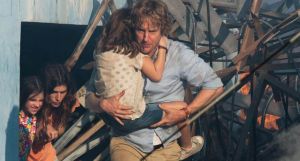 These Separatists are Killing the People they are Fighting For

I could also cut a movie some slack if you are going to present a movie in which these people opposed a water company coming in and exploiting there people. It can be done well, but the problem is that they fuck it up so hard that they simply can’t recover. You never once see any of the exploitation that the film is talking about, you are only told about it through Pierce Brosnan’s character and you just have to assume that there is exploitation going on. For all we know, the factory could have saved thousands of lives by creating clean water, but we only have the word of a drunk British intelligence guy to go on that they are turning these people into debtors.

Not to mention, of all the things, I can understand a group of people protesting this thing. I do, I would be a little worried too if I were in their shoes. But they go from mild-mannered people to overthrowing the government within the span of a couple of hours. This is complete with a tank, massive riots, and straight up genocide. Over a water plant! This is a little much don’t you think?

But okay, let’s just say for a moment that this is going to just outright exploit the people of Cambodia and drive them into destitute poverty and the only way to stop it is to overthrow the government… Okay… But why are you murdering so many innocent people?! I get it, you are pissed and you are blaming whitey for your actions. But these women and children have nothing to do with that and you are just slaughtering them, raping them, and burning down fucking cities. To say that this is taking it to an extreme is an understatement.

Then to add a cherry on the cake, the movie decides that it is going to completely jump the rails and eliminate every semblance of morals in these monsters hunting down people. It is stupid for them to be hunting down white people without restraint for the sake of a water treatment plant, most of which probably have nothing to do with your exploitation. But, there are several instances where these rebels are just outright butchering Cambodian people, PEOPLE THEY ARE SLAUGHTERING TO PROTECT FROM THE EVIL WHITE MAN! Most of the time, when someone helps the Dwyer family, these assholes just come popping up out of nowhere and just keep brutalizing Cambodian people. You would think that they would be less willing to hurt someone they are trying to protect, but no, these guys will kill anything that is not a member of their little party. This isn’t a Coup, this is a group of thugs who got a hold of a fucking tank of all things!

This movie is just terrible! The villains do not have any logic behind them, besides being Cambodians killing white people because of poorly explained reasons. It is fine if you want to make a movie about a Coup, but at least give us a legit reason besides this racist and xenophobic crap!

This movie is terrible! It does have some redeeming qualities like Pierce Brosnan and the concept. But when the concept is handled so poorly, the cast is miscast, the script is terrible, and as a result is loaded with xenophobic and racist tendencies, you just have a terrible mess.