Well, I reviewed the other three games in this franchise. I might as well bring up the fourth and hopefully final installment of the Scott Cawthorn horror game, Five Nights at Freddy’s. I have made it no secret that I adore these games for being original, chilling, and building a good story using minimalistic storytelling devices. As a matter of fact, the first Five Nights at Freddy’s won my award for Best Video Game of 2014. So to say that I have praise for this franchise is nothing short of an understatement.

So when I heard that there was going to be a Five Nights at Freddy’s 4, a daring sequel to the supposed FNAF trilogy, I groaned. For a series that was so good up until this point, now we run the risk of over saturation of the market and the fact that the story is simply played out just about everything that it can do. The best step forward would be a prequel to expand the mythos and everyone knows what I feel about prequels (I hate them.) So when it was finally released, I have to say that it almost completely met expectations. While it did lead on the positive side, Five Nights at Freddy’s 4 feels more of a cash in than a definitive conclusion to a great series.

The story of FNAF 4 takes us back to the ‘Bite of 87’ and the kid that suffered from it. You, as the player, take control of the kid who is currently attempting to heal in the hospital. You have to survive from being murdered by our classic cast of craving killers and survive to night 5.

Not saying that the other three featured poor gameplay, not at all. I’m simply saying that over the past couple of years Cawthorn is crafting these games with better and better precision. The fourth game of FNAF has much better graphics, gives you the ability to move around more instead of remaining in a stationary location, and gives you even more areas where it is possible for you to completely shit your pants in terror.

The game takes us out of the security booth and puts us in the room of a small child. The classic fears of monsters under the bed and in the closet are played on in this game as you are being hunted by the demented animatronics in your own home… Or so you would think.

More Story to the Ambiguous Mythos 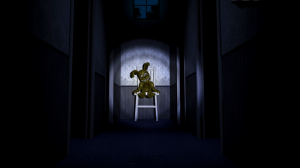 Scott Cawthorn has built an entire world around this demented little version of Chuck-E-Cheese from hell. The story of a nice little restaurant struck with tragedy and then due to that tragedy, descending into an absolute hell on Earth. In particular for the night guards who have to fend off these evil little shits day after day. The game is rich with history, characters, and events that lead to the first game, which has remained the center piece of the entire franchise.

Over the course of the game, Cawthorn has told a great story, through very limited means, and left the fervent fanbase asking for more; Hence the story of FNAF 4 which gives us a more in-depth detail, of what many can assume to be, the Bite of ’87.

This is an entire game dedicated to an ambiguous event mentioned and alluded to in previous games, giving the die-hard fanbase a conclusive story to fill in the blanks of the narrative. This shows a level of care, attention to detail, and connection to the fanbase that is rarely seen in other developers.

Five Nights at Freddy’s 3 was a MUCH Better Conclusion

The major problem that I had with FNAF 4 is that it was heralded as the grand end of the amazing story that took the gaming world by storm. It was the conclusion, the final chapter, everything will be wrapped up and we can call it a day… The only problem with that is that we kind of already did that with FNAF 3 which was a much more concise conclusion to the story.

It took place several years after the events of the first game, it established that The Purple Guy who murdered all of those children was captured by the children’s spirits, killed, and thus their souls were set free. They were no longer doomed to roam the rest of their lives as an animatronics puppet hell-bent on killing various security guards working for minimum wage. FNAF 3 very well closed most of the holes that the previous two games failed to tie up.

Then comes in FNAF 4, which focuses on, what can be assumed to be, the Bite of ’87. This is one of the few loose ends that was not tied up by the previous three games. It is the story of a tragic kid who is bullied by his brother, has a birthday party as Freddy Fazbear’s Pizzaria, and in the process of the events ends up getting his head smashed by one of the puppets. The game is actually the kid trying to survive in his own mind while being hunted by the puppets. While the plot can get downright surreal at times, this is still a far cry from the epic conclusion that we were promised.

The fact is that Scott Cawthorn gave in to some of the temptations that we all felt. He established the epic conclusion of the story in FNAF 3, realized there were still some fans demanding certain aspects of the game, and eventually gave in, thus creating the weakest link of the franchise.

Fan Service May Prove to be Detrimental to the Franchise

This leads nicely into my second con, the legacy that a game like this can do to a franchise. Up until this point FNAF 1-3 were a tight and concise trilogy. It was a challenging game, gave us some great gameplay, and told a three-part story about this demented children’s restaurant and the people who had to deal with the spirit inhabited mascots; then FNAF 4 comes around. It is the similar vein of the Arkham series that has the bastard step child, Batman: Arkham Origins dangling off the franchise as an annoying vestigial hang on to a strong trilogy. This is how FNAF 4 feels.

FNAF 4 may be a good game to play, but overall it feels out-of-place with the rest of the trilogy. When a friend tells you that you need to play this game franchise, this is the game that they will tell you that ‘you can skip.’ There just isn’t enough there to justify adding it to the main canon and it feels like blatant fan service to those who are big fans of the game. Thus, anyone who is not yet a fan or just a casual fan has no real need to go through the hellish gameplay just to see the story unfold.

While the graphics and the gameplay are some of Scott Cawthorn’s best work, sadly Five Nights at Freddy’s 4 is dragged down by the drawn out plot that only serves to add more story for the hardcore fans of the game. It is a game built for a niche crowd and if you are not in it, you are not going to enjoy it.

This does not color my opinion of the franchise as a whole, which I still view as absolutely stunning in all regards. This just marks the one game that I will choose to steer clear of in future play throughs.

Thank you for reading and as always if you liked this review, please like and subscribe for more from me.