When it comes to superheroes, I doubt that you will find a more colorful cast of super villains than the set that battles the caped crusader, Batman! Out of all the superheroes out there, I do not think there is a better cast of villains than Batman’s. They are colorful, maniacal, represent different styles of crime from mob bosses to deranged clowns. It is easy to see, with such a massive collection of villains, that a couple would begin to slip through the cracks and forgotten to the Penguins, Harley Quinns, and Jokers of the world. So I decided to dedicate a list to some of the Batman villains who do not get the due credit that they deserve. This is the Top Four Most Underrated Batman Villains!

Once again, setting a few parameters for this list. This list is not going to include any MAJOR main stream Batman villains. If you think Harley Quinn doesn’t get due credit or that Harvey Two Face is a better primary antagonist to Batman than Joker, so sorry! This list isn’t for you! This list is meant to shed some light on the Batman villains who do not typically get the spotlight. Also, these villains are meant to encompass a serious challenge to the Batman over time. So you won’t see any of the Quilt King or some of the more silly villains Batman encounter in the Silver Age. With that being said, let’s get to number 4. 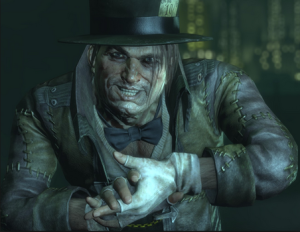 How did this ass hat never get used in the Tim Burton movies? He is perfect for Burtonization. He is based on Alice in Wonderland and has a gothic macabre to him. Jervis Tetch is one of those Batman villains that gets increasingly creepier dependent upon  how dark the Batman story is, Tetch can go from lovable comic relief to psychotic killer on par with Jeffrey Dahmer.

His love of hats, his use of hallucinogens, and his love for ‘Alice’ is nothing short of nightmare fuel. He has had decent appearances in the Animated Series and Arkham City. But with the current trend of mind bending villains, Tetch is the perfect guy to fit the mold.

When it comes to demons of Bruce Wayne’s past, there are few Batman characters who take it as personal as Hush. Thomas Elliot was the childhood friend of Bruce Wayne who also lost his parents. However, Thomas took a different past from the dark knight. Instead of crime fighting, the famous surgeon took on a different path. Making himself look exactly like Bruce Wayne and attempting to ruin his life and kill him… Different people, am I right?

Yeah, Thomas Elliott is a pretty fucked up psychopath. He wants nothing more than to kill Wayne, is a worthy adversary to Batman, and is horrifically underutilized. He had a decent role in Arkham City, was one of the few villains to escape the game, and then had a shitty one off quest in Arkham Knight. An underutilized character who deserves more than he gets, Thomas Elliott is one of the best.

This is the part of the list where characters do get major roles in various Batman comics, TV shows, and so forth. But, they do not get quite as high amount of screen time as they deserve. Clayface, not only was featured in the major boss fight of Arkham City, but was also featured in several major arcs in the Animated Series. So it isn’t like Clayface gets passed up like a lot of the other villains on this list… However… I cannot help but feel like Basil Karlo deserves so much more than what he got.

In most of his roles, Clayface is less of the main antagonist and more of the big bad intimidating brute that Batman faces in order to get to the real main villain and if he isn’t in that role, then he is typically only used in passing. Clayface though is an intelligent character who has the ability to morph into whatever he saw fit. This guy has the ability and the skills to get far into infiltrating and annihilating many of Gotham’s criminals as well as the good guys. Keeping him as the ‘big bad’ ass kicker to the main villain is a sham to what is an awesome villain.

So number one has to walk a pretty fine line between being horrifically underutilized, yet still being relevant enough that everyone can know them. To that role, I do not think that there is a better person to fit this role than Slade Wilson AKA Deathstroke. A militarized meta human that has been built to be one of the world’s most deadly assassin.

Deathstroke is so underutilized when it comes to Batman, who is often cited as one of Batman’s deadliest villains, to the point that he is actually used as the main villain to the Teen Titans and one of the primary villains to the Justice League. While he is used in other media, Deathstroke as a Batman is severely lacking.