There is always that one movie. That one movie that comes out in the dead of winter that makes movie watching worth while. For those of you who are unaware of the traditional movie schedule, typically when you hit January, you lose Oscar season, with winter beating people back out of the cold and into their homes, you tend to have a lot of absolutely shit movies released. This is when you see your pieces of shit found footage movies, Oscar Bait that went horribly wrong (i.e. A Winter’s Tale), and just overall garbage… However, there always does seem to be one movie that is worth checking out. When it came to 2015, that movie was Ex Machina. A quiet and artistic piece that makes us question what it means to be human and an introspective look at the human condition.

After winning a random sweepstakes, Bluebook (the largest search engine in the world that totally isn’t the Google) employee Caleb (Domhnall Gleeson) wins the opportunity to spend a week with Bluebook CEO Nathan Bateman (Oscar Isaac). once Caleb arrives at the location, he learns that he has been selected to administer a Turing Test to a new robotic female AI named Ava (Alicia Vikander). This test is meant to persuade the human that the robot is, also, human. Nathan reveals that Caleb did not win a sweepstakes, but was chosen for Nathan’s experiment. As Caleb interacts with Ava she shows further emotions, including sexuality, compassion, and so forth. All the while, Caleb is given warnings from Ava that he is not to be trusted. Caleb must then decide what he is to do, work and comply with Nathan or listen to Ava. 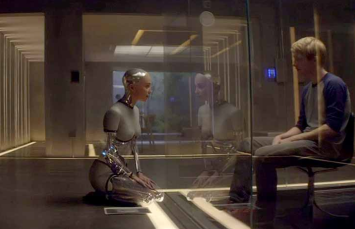 The music of this movie is like the fine seasoning on a well cooked steak. It isn’t necessary for the steak to be perfect, but its addition makes the flavor all the tastier. It is well done and the sound adds a whole other dimension to this movie.

The Cinemtography and Set is Striking

From the way the movie is framed to the cleaned and polished set, everything is very striking and beautiful to the eye. The use of white and red lighting gives a great futuristic feeling soon turned to a deep red dreaded sensation. The wall that separates Ava and Caleb being removed as the showing of a breakthrough. The actions, the visual, all of it is done with purpose.

It is one of the best parts of a movie when you put so much attention to detail in every shot, every choice in lighting, every subtle piece of this movie is put together to make an excellently shot film.

The Traditional Robotic Playing with the Concepts of Reality

The true strength of this movie comes from the traditional challenges that movies like this bring, what does it mean to be human? This movie blends those concepts, what it means to be human, what it means to feel, what is it like to play god, and to create this new entity made from man’s hands? It is all amazing concepts and all of it works so well.

The movie keeps you guessing every moment. You are not sure who is a human, who is a robot, you are unsure what the motives of the people are, or even if they have motives. In a way, the audience themselves are given a Turing Test as you are given only subtle hints on what is happening in this eccentric CEO’s basement. One of the most difficult and beautiful scenes in this movie is a moment when Caleb is not aware of if he is a robot or a person. He proceeds to cut into his wrist and dig into the wound to make sure that he is a person and not one of Nathan’s creations. It is a rough scene and a scene that sums up the movie so well, not even the people in the movie know if they are human or if they are an AI. This movie is an existential marvel that will leave you asking questions.

The Characters are Disconnected 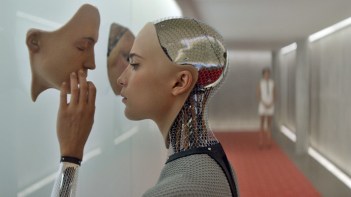 My one minor nitpick of this movie is the way the characters act. I’m not sure if this is intentional or if this is a mistake in acting… But the characters in this movie, which includes the humans of the film, just feel… Disconnected from any sort of reality. They feel, for lack of a better term, robotic. They are robotic in action, they are robotic in their conversations, they tend to lack much of their outward emotions.

Ex Machina is easily one of the best movies of the year. The minor nitpicks that I have of the movie are completely overshadowed by a Kubrick like striking cinematography, an excellent use of music, and a movie that will keep you guessing until the final credits. Not since Her have I seen a movie that tackles the issue of artificial intelligence and the concepts of humanity. If you are a fan of science fiction or just a well made art house movie, this movie is definitely for you!

Thank you for reading! I hope you like and subscribe for more movie and video game reviews from me!