Huzzah! I have survived finals week! Hopefully now I can get on my right and proper schedule. But, for now treat myself to a ‘wonderful’ movie watching experience! You know, I could say that a movie like Home is a movie that is just not made for me. But on the other hand, I do know the difference between a good kids movie and a bad kids movie. Yes, all a kids movie really NEEDS to do is to be a 90 minute distraction for the little kids to sit down and stare at a screen instead of driving their parents up a wall, but the true great kids movies are timeless classics. Home most certainly is not a timeless classic.

Home is the story of an alien race called the Boov. This race of aliens, on the run from an alien race called the Gorg, does a quick and bloodless conquest of earth as they move humans to other parts of the world and take their homes. One Boov named Oh (Jim Parsons) is a particularly annoying Boov and the rest of the Boovs do not seem to like him. One day, he sends an invitation to his housewarming party to other Boov but, out of all those silly hijinks, he accidentally pushes reply all and sends it to all the sentient creatures who exist! Including the Gorg!

So after making this bone headed move, Oh meets a preteen girl with the voice of a thiry five year old woman driving a car named Tip (Rhianna)… Yeah I don’t get it either. She was separated from her mother after the Boov invaded, sparking even more hatred for their kind. The two come together and hijinks ensue as the pair have to stop the reply all from reaching the Gorg and finding Tip’s mother with the help of Tip’s car now fueled by 7/11 slushie machines.

The best thing that I can say about this movie and that is not saying much is that kids will like it. So its intended audience will at least gain some entertainment out of it and the movie will become a nostalgia movie for a couple of eight year olds who are going to look back and watch Home with their friends in their college dorm or apartment.

On that note, I guess it is worth at least one watch and kids will eat the shit up over and over again. The best thing that I can say about this movie is that you can sit through it and not get overly irritated. 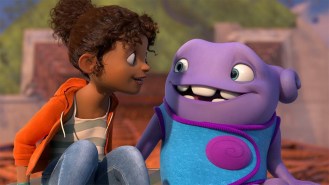 So I am just going to lay this out here, I absolutely detest The Big Bang Theory. I think it is the most repugnant, horrible, ignorant television show that I have seen in decades. Considering that nerd culture has become something of an accepted norm now and that people can voice the fact that they do enjoy comic books, superhero movies, video games, and stuff like that is wonderful. But then The Big Bang Theory comes along and sets it all back by about ten years by making one well adjusted nerd person and then a sex offender, a strange foreign guy, and a narcissitic assbag that is literally the brownest skid mark on the underpants of society… So needless to say I am not the biggest fan of the Sheldon Cooper character… As a matter of fact, I absolutely detest his character and find him to be offensive on a personal level.

But I am not here to talk about The Big Bang Theory… I am here to talk about Home. But here is the thing, this movie can be summed up easily just by saying ‘Hey, what if Sheldon Cooper was a race of aliens?’ Because that sums up this movie in just one sentence. Sheldon Cooper is a race of characters. They are all annoying little douche canoes who have no idea how to interact with people, but he is somehow lovable, and learns a little more about how to be human. Every time I see him say the words “My hands are in the air and I am waving them like I just do not care.” I just groan over and over again until it is finally over.

This movie is the worst kind of children’s movie. it is sweet kids fluff that tells the simple story of a kid finding her mom with a goofy alien. It has nothing but cheery Rhianna songs on the sound track… Because Rhianna is a voice actor and I guess that saves on getting a real soundtrack. It won’t let any moments develop without throwing in some kind of schtick for people to laugh. There is nothing new to the story, all things considered it is very vanilla. It is just a poorly made movie, simply put.

Thank you for reading! I hope you guys are having a great holiday season and I am looking forward to winding down the last 19 days of 2015.