A string of movies that have avoided my eye in recent years has been the wave of Christian movies that have been coming out since 2013. Typically speaking, I avoid these movies due to the fact that I hate preachy holier than thou stories that are made only for people within the Christian community to cheer while everyone else just scratches their heads. This wave of movies from people like the Kendrick Brothers and movies produced by Pure Flix are straw man movies through and through. They are not meant to tell a compelling story or even to paint Christianity in a humanizing or desirable light. They are movies that simply state that Christianity is great, everything else is evil, and here is our proof as to why this is the case. So naturally, those who associate themselves within these communities eat it up while the rest of us just pass on them as being movies that simply are not made for us.

However, one of these little films would have to come across my path at some point, so here I am to have a go at it. I should state before I go any further that this review is, by no means, an attack on Christianity. I have always firmly held true that everyone is free to believe as they want to believe and that we have the natural human right to follow any pursuit of happiness that we see fit. This is by no means an attack on religious ideology or the character of a religion. My personal beliefs, whatever they may be, do not effect the fact that I am reviewing a movie and a movie alone. So once again, keep that in mind as we progress from here.

War Room is the story of Tony (TC Stallings) and Elizabeth Jordan (Priscilla Shirer). They have a successful life, a nice house, and a daughter named Danielle (Alena Pitts). However, all is not right in their home as the two are having marital problems due mainly to Tony’s verbal abuse and the fact that he is thinking of cheating on Elizabeth. Elizabeth doesn’t know what to do until she meets the god fearing Miss Clara (Karen Abercrombie) who tells her that all she needs is Jesus to start the war to save her marriage.

The end of the movie sports a double dutch jump rope competition that is somewhat talented. It does feel like the only reason that it is in the movie is because the directors or producers happened to know a group that was talented in it and decided to throw them into the movie in order to pad out the film to reach feature length. Say what you will about this one, at least it had some talent to pad it out and give me something I could at least say… ‘eh, not bad.’ 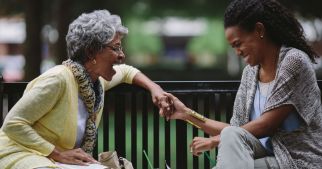 With lines like ‘I like my coffee hot’ in reference to bringing Elizabeth a cup of luke warm coffee due to her ‘luke warm’ prayer life; the strange fascination with Elizabeth’s feet and how much they stink; Elizabeth exclaiming her excitement of Danielle winning an award after basically admitting that she doesn’t pay attention to her child; and exposition statements that let us know that Tony works at a pharmaceutical company that are only there to exposit to us, the viewers… This movie’s writing is absolute horse shit.

The script shows either a complete lack of knowledge on the writers part in regards to how humans interact with one another or paints these characters in such terrible horrific ways. Granted, one could easily argue that this writing is the point. That without a big ole spoonful of Jesus in their life, these people lead a tragic and sad life that neglects their child and ruins their marriage. If that is the case, congrats movie! You made unlikable characters that I still feel no sympathy for unless they have religion in their life to help them. It isn’t that hard to, at the very least, make characters that we like and want to see succeed. Tony is a person who steals from his company, contemplates cheating on his wife, and is a verbally abusive dillweed. I don’t care that he found Jesus, I don’t care that he seems to be changing his life around. I do not care about this character and it is the fault of the writers for not making someone like Tony more likable or relatable. Same goes for Elizabeth who is just a doormat for Tony to walk on. It takes an wise old black person (racist stereotype alert!) in order to see the error of her ways and try to do something about it instead of feeling sorry for herself. If this were a story of a marriage that simply isn’t working and Jesus helps them reconnect, I can get behind that more than this shit… Which brings me to my next point.

A Horrid Representation of a Marriage

The fact of the matter is that this is simply a relationship that needs a divorce. Whatever brought Tony and Elizabeth together, that spark is gone and all that is left is a verbally, fradulent, and possibly adulterous husband. Elizabeth is clearly unhappy and both her and Elizabeth are neglectful of their daughter. This is not a case of Jesus needing to come down and right the ship, this is a case that once this little euphoria of having Christianity in their lives wears off, they will go back to hating each other and neglecting their child. I can believe it if the marriage wasn’t completely broken, but it is clear that these two made a mistake and need a divorce.

This movie doesn’t send the right message. The message is supposed to be that you should put your faith in Jesus and he will show you the way. However, what the message of this movie is that if your spouse abuses you and possibly cheats on you. Just pray to Jesus and do nothing else and everything will be okay.

This movie is terrible. It is horribly written, padded by a long jump rope competition, and does not convey the message that it is trying to put forth. If you want to make a movie about Jesus saving someone’s life, that is cool, and I’m all for it. But this is most certainly not the right way to do it.

Thank you for reading and get ready for Thursday, because on Christmas Day, I will have the lovely honor of bringing you all Kirk Cameron’s Saving Christmas.