Over these past couple of days, I have been on a Quentin Tarantino movie kick. Over the span of this weekend, I have watched all 8 movies (9 movies if you split Kill Bill in 2 movies) and decided that my Sunday post would be ranking each of them from their least good to the absolute best. Now I will stress, this is NOT a worst to best list. All of these movies, at their worst, are excellent or at least sit-through-able. But just keep that in mind if your favorite movie happens to land at the bottom of this list. With that being said, let’s get started.

We start off this list with one of Tarantino’s first movies. All I can say about Jackie Brown is that the crime thriller blacksploitation movie is the most forgettable of all of Tarantino’s films. At least those that weren’t as successful as his classics had a great deal of character to them. But Jackie Brown is just a ‘good movie’ no more, no less. Not to mention, whenever people bring up Tarantino’s list of exceptional movies… Jackie Brown is almost always forgotten. It could be that this movie’s biggest flaw is being the in a much more interesting oeuvre of films. 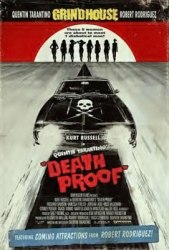 Unlike others who have attacked Death Proof as one of Tarantino’s worst films… Including Tarantino himself… I actually like Death Proof for being what it is: an unapologetic homage to various exploitation genres of the 60’s and 70’s. Even going so far as to have his film look very gritty, unclean, and filled with various movie flubs that were known for the low budgeted genres at the time. I think one of Deathproof’s biggest failings is the fact that, unlike westerns and pulps, exploitation movies can only really be enjoyed by a certain niche market of people and even at an exploitation movies best, it tends to be not very well received. A solid movie, but certainly not one of Tarantino’s best, it rounds out the bottom half at number 6. 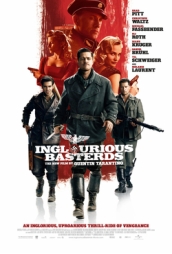 I’m actually not as huge of a fan of Inglorious Basterds as others are. There is nothing wrong with it. I do thoroughly enjoy it. Who doesn’t love watching people fuck with those wacky Nazis? But out of all of Tarantino’s films… I feel that he has had much better movies AND ones that are much more keeping with his style of film making. Out of all eight movies, Inglorious Basterds are quickly becoming more and more the odd movie out. A fun kill zombies thrill ride, but not as visually stunning or in keeping with any homage to previous genres except a vague connection to Nazisploitation.

However, on the positive note, Basterds is still a glorious experience. It is a solid two hours of scalping zombies, Brad Pitt’s excellent acting, and patriotic American wishfulfillment. 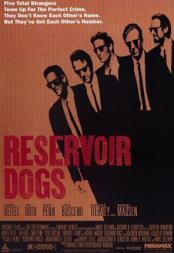 Being Tarantino’s first movie, Reservoir Dogs does hold a special place in the heart’s of anyone who is a Tarantino fan. There is no doubt that Reservoir Dogs is an amazing movie and one of the greatest movies of all time. With a cast that includes Keitel, Madsen, Buscemi, and Roth, you know that this movie is going to be a cinematic and talented ride from start to finish. However, me being the stick in the mud that I am, will argue that as time has gone on, their have been movies of Tarantino’s that have slowly surpassed this movie in terms of quality and cultural impact. While I will not deny that this is one of the best movies I have ever seen, the shear amazement of the next three means that it finds itself caught somewhere in the middle for this one. 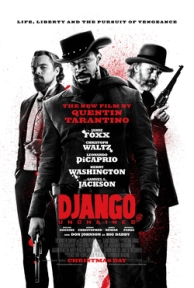 If Tarantino decided that he just wanted to make westerns for the rest of his life, I doubt I could come up with a compelling argument as to why he shouldn’t do that. All things considered, Tarantino has surprisingly become one of the best Western filmmakers of all time. Considering this is the man who brought us Pulp Fiction and Death Proof, that is a surprisingly hard but satisfying pill to swallow.

Django Unchained is a love letter to Spaghetti Westerns and classic styles of western filmmaking… But you have heard all of that before. No need to keep beating the dead horse. Bottom line, Django Unchained is an amazing and satisfying movie. The cast of characters are absolutely wonderful. The resurrection of an old folk hero in Django is enough to make any cynical old western lover to be positively giddy in their boots. It is some of that old western hyper violence that you need to get you through the day. Kudos all around for Tarantino’s most recent success. 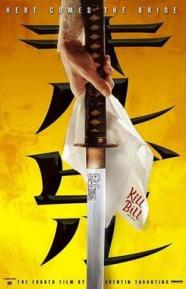 I love Kill Bill. I absolutely love every damn second of it and will always say that that movie is criminally underrated compared to other movies. Considering the fact that it holds an averaged 86% on Rotten Tomatoes, that goes to show how criminally underrated that this movie is. Typically whenever I think of Tarantino, I think of Kill Bill. All of the love and passion that the man has for filmmaking is present in this movie. The cinematic violence, the attention to detail, the homage to previous genres, and his cast of loyal actors. Just about everything I love about him is up front and center for the world to see.

I admit that the second apart at the end is not the strongest ending of them all, but it is still satisfying and a good way to bring the two movie epic to a close. This movie is my favorite of Tarantino’s works and second only to the one at the top spot. 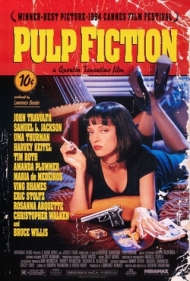 Could it be any other? Out of all of Tarantino’s movies, Pulp Fiction goes down as one of the greatest films to every be conceived. The out of order style of narrative story telling, the various twists and turns that it takes you on, the characters, the plot, all of it just equals out to what is by all accounts, a perfect movie.

While Reservoir Dogs may have been Tarantino’s first movie and put him on the map, Pulp Fiction assured that Tarantino was going to be a house hold name and one of the greatest filmmakers of all time. He has since used this fame to create of old and forgotten genres of filmmaking and presented them to new and younger audiences. Without a doubt, Pulp Fiction is the greatest film in Tarantino’s oeuvre.