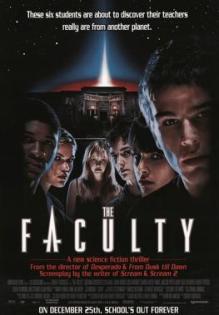 It is that time of the week again and I am still feeling that 2016 new year hangover. Fear not, I will be going to the movies soon so I can waste my time with some of October and the Oscar’s dumping ground that is January. But for now, I will dig something out of the vaults to give it a little bit of nostalgic talk. Whenever I came up with the ‘From the Vault’ reviews, I always wanted this to not just be my filler reviews where I just talk about some random ass movies. Whenever I brought something out of the vault, I did want a legitimate reason to discuss it. Whether or not this was to take a second look at a movie that received criticism it did not deserve or a look at a bygone age and the movies that represented it. So today, I want to bring up the 1990’s and more importantly, 1990’s horror movies. The 90’s were a weird time. After the cocaine comedown of the 80’s, the 90’s became a time of rampant cynicism. It was seen in movies, television, culture. The idea of flaunting the establishment and horrific nihilism was the mainstay of our culture. This was reflected in our cinema as well. You see this, ‘fuck the past, they didn’t understand how the world works’ type of attitude popped up a lot when it came to movies. Particularly one that had a pro 90’s grunge look to it.

Movies like Wes Craven’s Scream were a perfect example of this. It was a type of filmmaking that seemed to poke fun at the tropes of the past in an irreverent sort of way. Basically saying that all horror movies had certain rules that needed to be abided and that if you followed them then you would be able to survive a horror movie. Many movies liked to look back at the past with a sort ‘anything you can do, we can do better’ type of mentality. It was certainly a product of its time and dependent upon who you talk to, is either a solid part of 90’s cinema or a much appreciated end to a terrible movie trope.

I find it interesting that it is Scream that receive the majority of derision from critics of this type of 90’s movie making when there are certainly much worse culprits out there. I guess it does help to be the most well known, even if you aren’t the worst culprit. But today, I would like to bring to light the Robert Rodriguez movie, The Faculty.

One of the more forgotten movies of the 90’s, The Faculty is the quintessential movie that says ‘Yeah, we are the 90’s and we do stuff better than the past.’ What is basically just a recreating of Invasion of the Body Snatchers down to the point that they directly reference it in the film, the movie is a decent creation but ultimately a poorly aged execution. 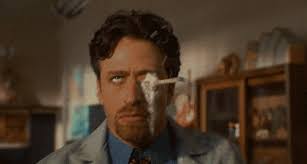 Sporting a cast that includes a before his prime Elijah Wood, at their prime Josh Hartnett and Clea DuVall, and pre-Fast and the Furious Jordana Brewster, this movie has no shortage of excellent actors. They even were able to get Jon Stewart on screen before he became a Daily Show exclusive and Selma Hayek to show up for a split second. All things considered, these are some pretty strong names.

The acting is done very well. As much as I dislike the character of Zeke, for being the ‘too cool for school, but tortured genius’ character archtype, Josh Hartnett does add some personality to the character and makes the stereotype at least palatable in the movie. Unlike other ones that seem to demand your awe inspired dick sucking to follow because they are such a tortured soul, Hartnett at least owns the role and makes Zeke a character that you could legitimately see being smart, but jaded by the fact that his parents fucked off to god knows where and leaving him high and dry.

Elijah Wood also does a very good job. Granted, it is very easy for someone like Wood to play the weakling nerdy type like Casey. He just has that adorable face and look of vulnerability that makes him perfect as the unlikely protagonist.

Each of the actors do an admirable job at portraying the moment when their characters become taken over by the parasite and losing all vestiges of their original personality. All around, excellent work.

The movie maintains a consistent feeling of dread lurking around the corner. This force that they cannot stop hanging over their head and they are absolutely powerless to stop them. With the exception of the Friday Night Football scene that comes across as this loud and bombastic way to bring Football into the fray and show them infecting all these different people. That comes across as unintentionally stupid. Especially whenever they show Robert Patrick’s mugging face every minute.

There is this sense, as the survivors are huddled together in the gym of a crushing inevitability hanging over their heads that they are unable to stop as they continue to exhaust all of their options. 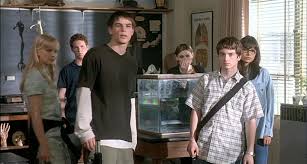 This is really the only strong con, BUT MAN is it a big one! This movie, down to the outfits, and grungy look of the school has this annoyingly cynical pretentious attitude of ‘whatever you can do past decades, the 90’s can do so much better’ complete with the middle finger on one hand and an unfiltered cigarette hanging in the other one.

Everyone is wearing their best flanel shirts and have the look like they haven’t showered in several days. The story is the horrible establishment of the ‘faculties and teachers’ trying to make the students conform to their hive mind style of thinking. BUT NO! Those students will not be a mindless robot in the alien regime! They are the counter culture, they will resist all of that conformity, and tell them to fuck off by doing copious amounts of caffeine pills and drugs to fight the man! The entire premise is that grungy flaunting establishment dillweed that is the stereotype of all 90’s anti-establishment movies.

As I mentioned before, as much as I give Josh Hartnett credit for making a stereotypical character palatable, Zeke is still that annoying ‘I’m a cool and tortured soul who is intelligent, but chooses to deal drugs and fail high school because that is who I am.’ asshat. All he does is spout philosophical one liners, is self aware of his bullshit habits, and constantly flaunts the system because nobody can understand his pain. Even at the end of the movie, Zeke doesn’t change. He is just a part of the football team, so I guess there was some conformity. Also it is implied that he is fucking one of his teachers which is a whole other level of fucked up since the guy is still a student at a high school.

Everything about this movie is representative of the worst parts of the 90’s. Don’t get me wrong. I grew up as a kid in the 90’s. I can understand these tropes as much as anyone else and in other instances they may even work. But when you take the worst parts of any given decade, shit is going to absolutely suck regardless. And this is the case for a movie like The Faculty.

Back in the 90’s, this movie would probably get a much better review out of me. But it has not aged well and its wrinkles show in the fact that it is a representation of all the annoying tropes of the 90’s. While it is still a worthwhile movie to watch, it is worth a once over watch at most.

Thank you for reading! I hope you enjoyed and be ready for a new episode of NTSOE coming up soon.

One thought on “From the Vaults: The Faculty”

Leave a Reply to The Otaku Judge Cancel reply