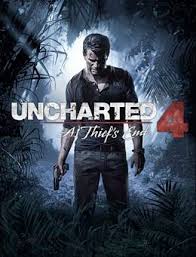 Well it is the summer time and unlike the spring where I had no time to do anything… I am now stuck with absolutely nothing to do for the next three months. One week in and I already am unsure what to do with myself. Locked alone in my apartment with my cats starring at various screens and thinking about life. Well, in order to curve the Cabin Fever, I went to the local movie rental and picked up the final installment of the Naughty Dog franchise, Uncharted 4: A Thief’s End. This is up there for one of the most anticipated games of the year and all things considered, I was looking forward to it. Half because the original Uncharted is one of my favorite games and two because I am ready for the series to be over. I love it, but the game franchise has clearly run its course and it is now time for us all to move on with our fucking lives. So I picked up the game and gave it a play through and… Well… It is exactly what I expect… In that I have played this game already three times before and I honestly didn’t need to take a fourth crack at it. But more of that later, let’s dig into this game!

Several years after the events of the third game, Nathan and Elena have finally married and settled in to accept their normal life. Nathan works for a salvage company while Elena writes articles for tourism sites. Nathan is clearly longing for his old life and the thrill of the hunt for rich treasures. One day, his long lost brother Sam appears and explains that he needs to find a treasure or else a Panamanian drug lord will murder him. So Nathan and Sam, with Sully in tow because Uncharted, set off for a trip around the world as they hunt down good ole fashion pirate treasure and fight off their former partner Rafe and his associate Nadine.

Okay, I am going to get this out of the way now so that when I do start complaining people can shut the hell up. On a creative standpoint, this game is sharp. It is just like the other games. The graphics are breathtakingly beautiful, the story is well done (although told for the fourth time), and gameplay is fun, engaging, and challenging. Naughty Dog is a developing company who knows how to polish a game. They take their time and fine tune the entire thing so that it glistens in the sun.

However… At this point these things are expected from an Uncharted game. Of course I expect beautiful graphics, an excellent story, and good gameplay. It is Naughty Dog! It is the Uncharted series, this shit is supposed to be off the chain. But there are problems with the franchise that I will get into shortly and typically the response in the past has been these three fucking things to counter act the cons of Uncharted. So I am getting them out of the way now and placating those who are ready to take up that mantle. Yes, the game looks and plays great. But that is not excusing it from its detrimental flaws. Now, let’s move on.

I have to give Naughty Dog balls. They finally ended one of their cash cows… Though granted, they set it up for some sequels if they want to. God forbid you actually conclude anything when you can ride that money train until all parties are raw in the privates. But at the end of the whole game, you can pretty much safely assume, as the game is aptly named, that Nathan Drake is done with the series. I give this game credit. They did what they had to do and as a result, I think it will work out for Naughty Dog in the long run. 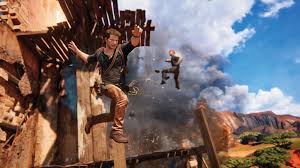 Uncharted 4 is exactly that. The EXACT Same Story with Slight Differences 4 Times

Okay… Let’s dig into it. For anyone who is an Uncharted fan, even myself, you have to come to a sad truth and that is you have played this game three times before. Just like we did with the other games in the franchise, you can telegraph the entire plot. So let’s do this. Nathan Drake is done with adventuring, until one day he is not done with adventuring. He and his crew of friends are going to go after one last gigantic world changing treasure… Because you know… There are at least four. However, all is not right. A person from Nathan’s past, along with a strong and confident woman, AND an army of unlimited goons are also after the treasure. Hijinks ensue as they travel around the world looking for the treasure.

I just summed up the past three Uncharted games. It is the exact same well told game replayed over and over again. Yes it is well done, yes it is a fun experience. But that is just it! This is canned success. It is the carbon copied tried and true Triple A gaming method of making money. There is no innovation or trying something new. Uncharted 4 is just the same game as the other ones with a few new mechanics thrown in like sliding down a rock face and using a grappling hook.

I’m sorry, but I cannot let this slide. I am not going to be one of the people who cries GAME OF THE YEAR just because it is well done. A game needs to be more than well done and polished. It needs to bring something new, try something different. A game that is deserving of Game of the Year should not be the same game told a third time with a hand extended saying “Well give us cash now.”

This game is great and if you are a fan of the early ones then you will like it. I will not take this away from Uncharted or from Naughty Dog. However, Uncharted has become the worst culprit of the canned video game success. It is a fun platformer and a fun shooter that has a plot that is cookie cutter. It isn’t meant to take risks, it is meant to pander to all parties and to that end it does well… But at the same time I am not about to praise it as Game of the Year for creating mediocrity. If you want to give it a shot, play it, and enjoy it… Then go back to playing the first and second game that are the true timeless classics.

One thought on “Tanner Reviews Uncharted 4: A Thief’s End”