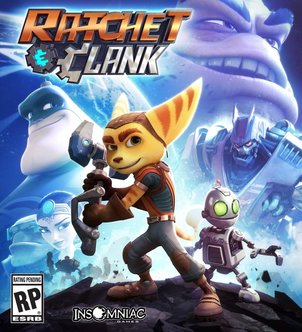 This has not been a good year for the Ratchet & Clank franchise. First, they watch as their movie bombs at the box office and with critics as well. To add insult to injury, their video game that was meant to reboot the franchise is nothing to write home to mother about as well. Of course, the thing is getting at least 8/10 for every video game outlet because most video game criticism sucks the dicks of producers and developers alike, but I cannot simply walk away saying anything positive about one of the most forgettable gaming experiences in recent history.

In this reboot of the classic series, Ratchet and his robot buddy Clank have to free the universe from a nefarious space captain. They travel from planet to planet, fighting baddies with a multitude of different goofy guns and collecting obscene amounts of omnipresent coins that fly at you at every second of the damn game.

I won’t take away from the fact that the game does have ambition to it. You can see that the creators really did want to resurrect the franchise. There is attention to detail in the artwork, the levels, and the gameplay that says that this is something more than a completely shameless cash in.

However, tragically, this is the real world. Heart and ambition can only get you so far and in this case it is not enough to save this game. 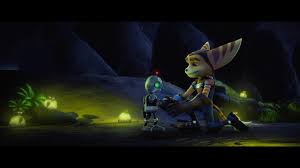 I’m not saying that the animation is bad. It is good, colorful, and works well with the environment around it. It is just, and I know I am going to get shit for this one, too cartoonish. I know! Ratchet & Clank is a cartoonish game, I get that. But something just feels off about it. The colors are too vibrant or the animation is just a little wonky. I don’t know how to put it, but it irritated me and offended my visual senses every second of me playing this game. While I understand this may be an aesthetic choice, if I cannot touch the game due to the fact that the color scheme and animation style is so far fetched that it offends my visual senses… You certainly did something wrong.

Video games have evolved rapidly over the past couple of years. This is just a fact of life. Back in the day, games like Jet Force Gemini, Banjo Kazooie, Crash Bandicoot, Spyro the Dragon, and Ratchet & Clank were very popular. You can thank the good people at Nintendo and Sega for championing that horse. But today… Things have gotten realistic. Video game franchies like Tomb Raider are being saved to join the likes of The Last of Us, Fallout, Elder Scrolls, Dragon Age, and so forth. Now, I am not saying that the cartoonish video game is out the door. There is plenty of a market for it on Steam and others like it… But a Triple A cartoonish game like Ratchet & Clank on the next gen consoles… Tragically it just isn’t there.

The time of collecting various omnipresent jewels, the duo of a cartoonish plushy and his trusty side kick, and a goofy PG friendly premise are simply behind us. ESPECIALLY if they are not championed by Nintendo that has its own fan base that is entrenched and unwilling to budge. I can appreciate Sony attempting to take on the Nintendo dynasty… But it just isn’t going to happen. This game is forgettable and it just isn’t going to happen. I’m sorry the few Sony fans out there. It is time to accept your fate when it comes to the marketable cartoon character genre.

I know people like this game and I can understand that… But man… This was just forgettable and said. Ratchet & Clank is a good gaming franchise, but it is clear that Sony is trying to make characters iconic that just don’t have the snuff for it. The movie bombed, the game is forgettable, and ultimately most people will not even remember this game exists when I bring it up at the start of January next year. This is a game that is best laid to rest and forgotten except for those who still champion its cause.

Thank you for reading! If you enjoyed this please like and subscribe for more! Also, I would like to beckon all of you over to Project Derailed! The site is now up, running, and will soon be filled with posts, streams, podcasts, and much much more!