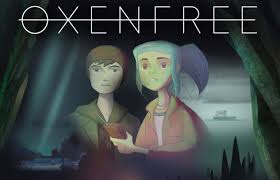 So back to Steam with my latest dose of indie gaming. It truly is one of my favorite places when it comes to reviewing things. I typically enjoy them for one and if I don’t, they are at least somewhat memorable. But this time, thanks to a sit around the table, drink, and play video games sessions with my friends, I was able to get a look at a new Steam Indie Darling, Oxenfree. Oxenfree is an interesting little game that takes a few pages out of Until Dawn’s playbook and sprinkles them with just the right amount of Silent Hill  and Double Fine Production animation.

Five teenagers travel to a small island known as Edwards Island to be rambunctious teenagers and party. Alex is our main character, complete with blue main character hair. She has recently lost her brother, Michael, and is looking to spend some time away from it all to wind down. The rest of the party includes Alex’s new stepbrother Jonas, her life long stoner friend Ren, Ren’s crush Nona, and the former girlfriend to the late Michael, Clarissa. After the group explores a strange cave, a large green triangle appears and all hell breaks loose. They wake up disoriented, scattered, and the island abandoned. The kids then must unravel the mysteries of the island while they try to find their own means of escape.

Takes Likable Characters a Step Further than Until Dawn

I am a huge fan of Until Dawn, as you could guess. I find it to be a good game that is an excellent take on the modern slasher film. Due to the added time, it gives us more time to bond and relate to the characters instead of seeing them as douchebags that need a quick death so that we don’t have to deal with them anymore. While I do like the character development in that game, I feel that this game takes it another step further.

Not only does it take time for the characters to be likable and relatable, they actively are from the start. Each of these characters feels like a person and not someone that seems to be filling a role, which was a flaw of Until Dawn’s writing. While Clarissa is a bitch, she does have a more likable side to her if you explore it. Alex can be as nice and bitchy as she wants to be. Ren may be a stoner but he also has more character to him than just the stoner character. These all feel like teenagers. They are written well as teenagers and do not come across as adults trying to act, write, and speak like a teenager.

The game’s plot is great. I touched upon it before, but I feel compelled to do it again. The story is shrouded in mystery the second you open these triangles after you wondered too far into the cave. With having no idea where you are or how you got there coupled with these triangles, the players are pushed into solving this great mystery of where these triangles came from and what do they want. 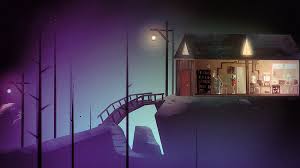 The Two Dimension Character Drama is Starting to Become Played Out

Maybe it is just me, but Indie Games are beginning to follow a formula. Don’t get me wrong, I love the formula of playing to your strength, hiding your weakness, and give us something wonderful that is far away from the Triple A console genre. However… Things have started to get… well samey as of late. This War of Mine, The Cave, and so forth all fit the same two dimension story based drama. Maybe it is just me, but Oxenfree felt like the straw that broke the camel’s back.

I do like the style and the artwork. But this game screams “powerhouse indie darling” and not in the good way. Unlike the other games, this one doesn’t feel like it is trying something new. Oxenfree is a little too safe. It is the “as long as we give a good story and decent visuals, we don’t need to try too hard.”

While the indie game feel is starting to wear a little thin for me, if you are someone who still loves the genre, then this is a game for you. It has strong character development and comes complete with a strong plot that is downright Lovecraftian or King in its delivery. It is certainly worth the price tag and the play through.

Thank you for reading and as always, please like and subscribe for more from me. Come back soon to check out some reviews of Pokemon Uranium, Florence Foster Jenkins, and War Dogs.